My Dad is still in the hospital.  Word is that he will probably go home tomorrow.  I'm packing up to go home with him for the night - longer if needed.  His procedure went well in as it worked and his heart rate is at a good even rhythm where it was very irregular in the past.  The procedure took about six hours and he was under anesthesia the whole time.  When they took him off, he wasn't breathing on his own, so they had to intubate him.  Later that day, a nurse would assure me that is not uncommon.  I have always trusted the word of a Nurse more than the word of a doctor, so I chose to believe that.

When the doctor came out and told me this, he told me to watch for signs of a stroke and generally freaked me out, then it was another four hours before I was even able to see him with my own eyes.  When I finally walked into the room, he looked opened his eyes to look at me, then closed them like he didn't recognize me.  I said, "Do you know who I am?"  He looked at me and said, "Beverly?"  I said, "This is SO not the time to be funny, Leon!'  He laughed, "I am kidding, Shara."  He is fine in that respect and his heart rate is good.  But since he didn't have a drop of food or fluids in 36 hours he is obviously dehydrated so they are working on that.  I can see that.  Can't you?  But the nurses are all like, "HUH.  Wonder why you are so dehydrated."  Seems kind of obvious to me.  But, I got thrown out of Medical School long ago, so what do I know.  :)

Here's his main problem.  He is CRANKY.  And, I don't blame him.  No sleep with everyone poking and prodding on you every ten minutes all night long, no solid food (he has to eat only cold or room temperature soft food for two weeks (That is a LOT of yogurt and pudding), peeing in a bottle, wearing a hospital gown, laying in bed, not having a shower or being allowed to brush his teeth in three days- well, I would be cranky too.  So, if the hospital says he can go home, home he will go.  A shower, a good night's sleep in his own bed with his own pillow and his big screen TV with FOX news blasting away all day and he will be good as new.  The doctors SWEAR he will feel GREAT and be BETTER THAN EVER and all that jazz.  He just had to take a little slide backwards to get ahead.

*Ten bonus points and a big thank you for reading this entire post if you aren't even related to me. :)

P.S.  Have you seen the new PINK pumpkins? 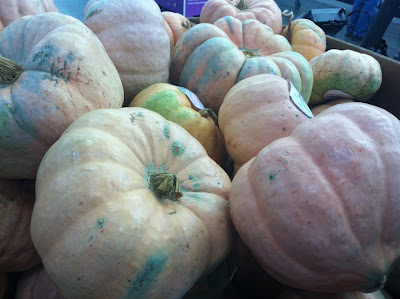 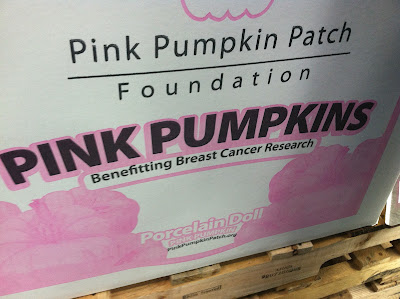