This morning I woke up dreaming of all of the yard sales I saw on Craigslist last night.  That's when I heard the BOOM of thunder and the dripping of rain off the roof.  The bad thing about yard sales and rain is that yard sales get cancelled in the rain. But, the good thing is that they get rescheduled, so you really don't end up "missing" anything in the long run.  But, still I wanted some JUNK.

I had told the boys yesterday that even though I bring things home from the thrifts, I haven't found anything really GOOD in a long time.  You know what I mean, something amazing that you cannot believe you just found.  Like you have Fort Knox in the back of your car and you have to get home NOW before someone robs you of your treasure.  Even though it might be an old quilt or a piece of Pyrex - to you, it is GOLD.

While it rained and I drank my coffee, I looked through Craigslist just for a time killer.  I saw an ad that simply said BASKETS.  I don't know why I clicked on it, I assumed it was going to a pile of old florist baskets, but I always have that hope that I will find a great old market basket or a picnic basket.  So, I clicked on the ad and I saw the most glorious sight. 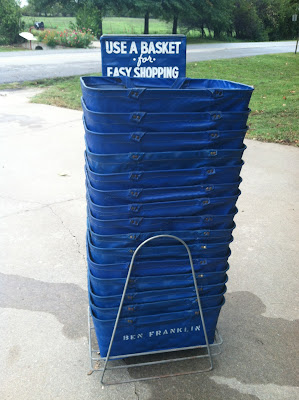 Vintage shopping baskets from an old Ben Franklin.  Whaaaaat?  I NEED THESE.  The price would have been killer for one basket.  But, the ad was for THIRTY baskets and two wire racks.  Two complete sets of vintage shopping baskets.  I sent an email to the seller, hoping they were still there.  I included my email, home phone, cell phone and social security number.  Ok, not that last one, but I wanted them to know I was a serious buyer. 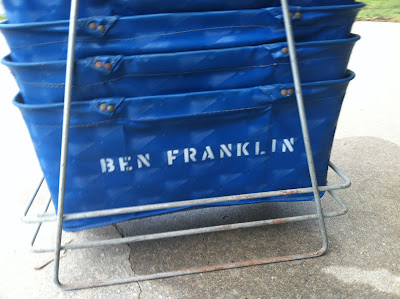 We had errands to run, so we left without hearing a word.  I checked my email a few times in between errands, but there wasn't anything.  Just as I pulled into Sam's Club, my phone rang.  It was the BASKET man!  Woot!  He was about 30 miles away, but as luck would have it, I was on the very same highway that lead right to his front door, so off we went.  I told him I would be there in about 35 minutes and he said his wife would be home by then so I didn't have to worry about being alone with a man.  Well, I wasn't until he said THAT!  Besides, I had The Bean with me.  Halfway there I decided I should tell my Mother where we were going lest the Craigslist Killer answered the door.  She was relieved I told her and demanded that I tell her the minute I left his house.  (You are never too old to report to your Mom!) 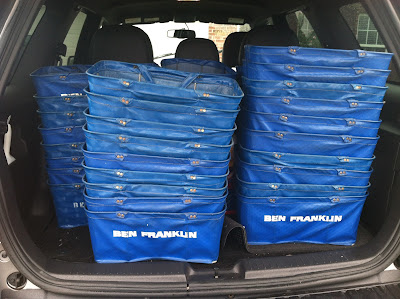 When I pulled into the driveway, he opened the garage door, set the baskets out, took the money and went back inside.  It was very fast and safe.  We loaded the baskets into the back of the car and I squealed out not believing what I had just bought!  I've looked at these old baskets on ebay and wished I could find one at a sale.  They make great storage or to hold projects.  Not to mention, they are very collectible.

Each basket is made of a heavy oilcloth stretched over a wire frame.  They have a carrying handle and say BEN FRANKLIN on the front and the back.  They are all in great shape.  Bonus - when I counted them there were thirty ONE baskets. The seller told me that a friend of his had cleaned out an old Ben Franklin and threw most of the things away (NOOOOOOOOOOOOOOOOO!!!!!!!!!!).  The guy was on his way to the dumpster with the baskets, but he (the seller) took them instead.  He had three sets, but I was lucky enough to get the other two.  Yes, I will be selling them. :)  Most of them.  Some of them.  Well, we'll see.  (I really will sell a lot of them!)