Wreaths Across America is a program that provides a fresh evergreen wreath to be placed on all graves at Arlington Cemetery as well as other National Cemeteries across the USA.  Our local National Cemetery has been a part of Wreaths Across America for the past few years.  We often drive past the cemetery and we always stop when we see the wreaths have been laid out.  It is beautiful and really a touching thing to see.  Thousands of graves with white marble headstones and a green wreath under it.  It is very peaceful, respectful and serene.  I had heard that a few Boy Scout groups were the ones that laid each wreath out, but I wasn't sure when they did it exactly.  Friday I read in the paper that today was the day that the wreaths would be laid out and that the public was welcome to help.   I knew immediately that I wanted to be a part of it. 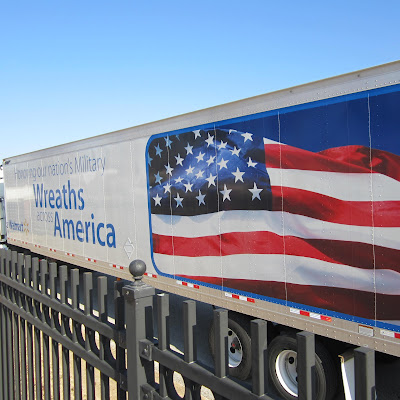 This morning, The Bean and I headed to the National Cemetery to help what I honestly thought would be a handful of Boy scouts and volunteers.  When I turned the corner that leads to the cemetery, I was amazed at what I saw - rows of cars lined up on both sides of the road, people walking blocks to get to the ceremony and Wreaths Across America trucks parked along the way. 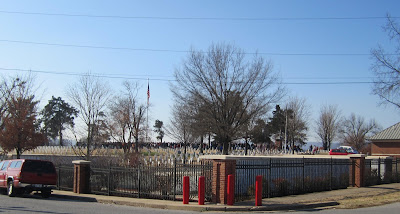 There were about two thousand people there which really surprised me.  I did hear on the news that this is the sixth year that this cemetery has been decorated and up until three years ago, only about twenty people laid the wreaths out. 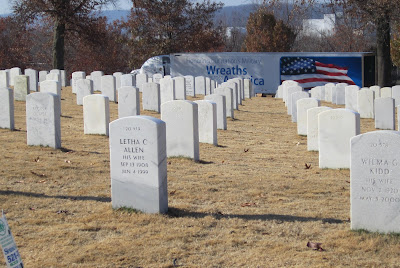 The trucks were in place and the boxes of wreaths were out, opened and ready to be placed when we got there. 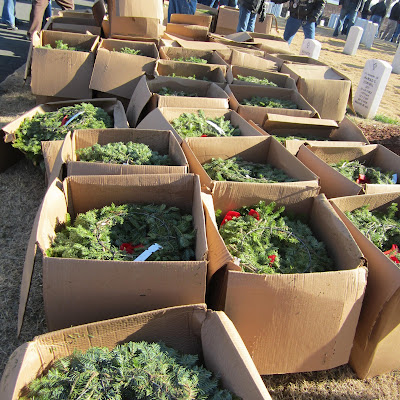 Each wreath is hand made, thick and full of evergreen and topped off with a red velvet bow. 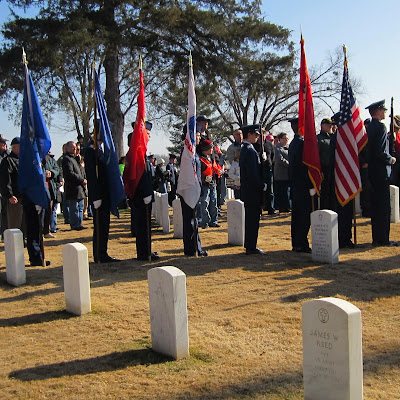 First there was a ceremony -  the presentation of the Colors, our Senator spoke eloquently about the Patriot Guard, the Veterans and America.  It was emotional.  The loveliest version of taps was played, long and slow and perfectly pitched.  A twenty one gun salute followed. 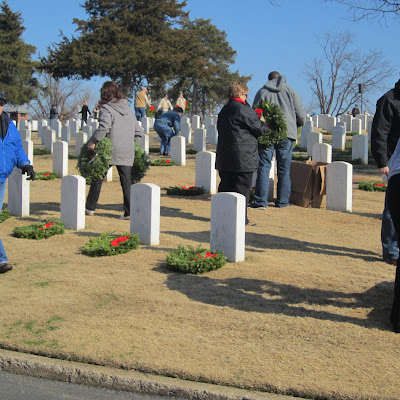 Then were dispersed to lay out the wreaths.  No one instructed us on the proper method, so we chose a wreath, laid it down, fixed the bow, then stepped back for a few moments of silence.  Others were saluting each time, but I assume they had a military background. 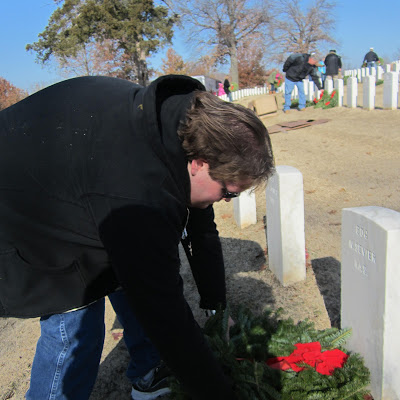 I was proud that The Bean wanted to do this with me.  We go to the National and Confederate Cemetery quite often and we have gone several (too many) times as a funeral procession for a solider killed in action has come through.  He stands quietly and places his hand over his heart as they pass by.  He understands what they have done and what their families have to now deal with without their family member. He makes me proud. 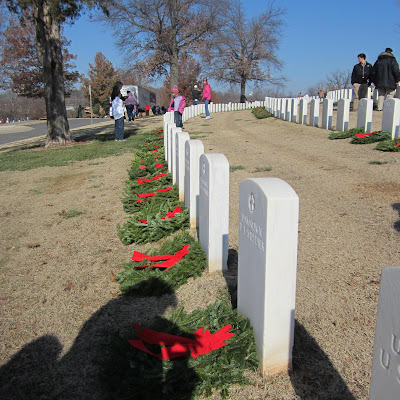 The families were to go first and lay wreaths at their loved ones graves.  We found a long row of Unknown Soldiers and felt that we were meant to give them their wreaths.  They have no one else. 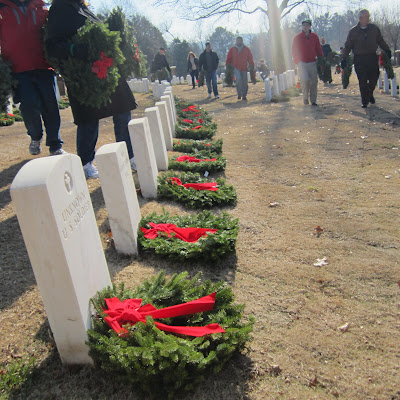 There were a lot of people scattering trying to get to lay at least one or two wreaths out.  We did about twenty each on this row before it was filled. 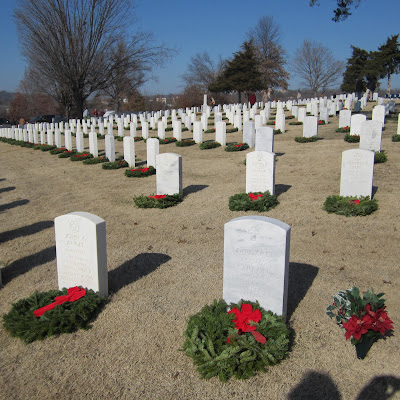 The people quickly left the cemetery once they had placed their wreaths. 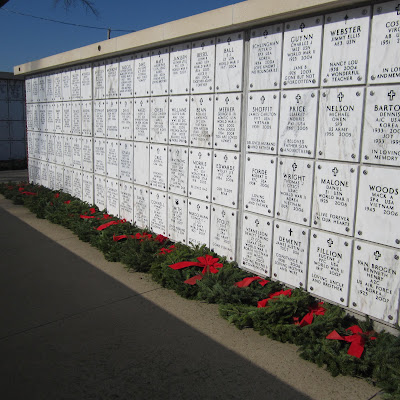 We walked down to this area and discovered that no one had put wreaths along the backside of the vaults.  By this point, the cemetery was nearly empty of volunteers.  I found someone in charge and they brought us over four boxes of wreaths which The Bean and I laid at each spot until it was full.  There was another couple there that helped make sure we had one in front of each row. I'm glad we discovered that they had been missed before a family member noticed. 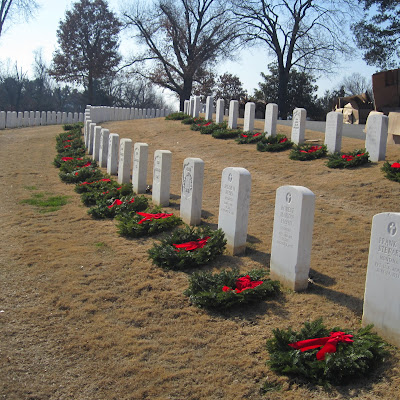 We walked around the cemetery reading the names, the dated, the service dates, etc.  You can tell the names that died in service at a young age and the ones that lived nice long lives. 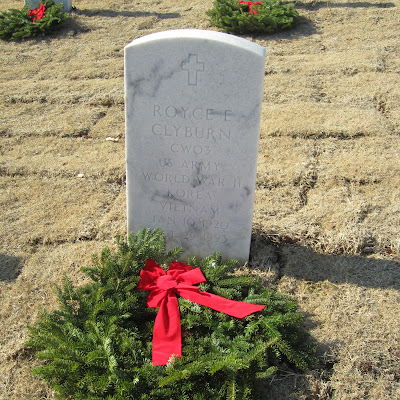 This is my Stepfather's Dad's grave.  We weren't able to do the wreath, but we were glad to have found the marker. 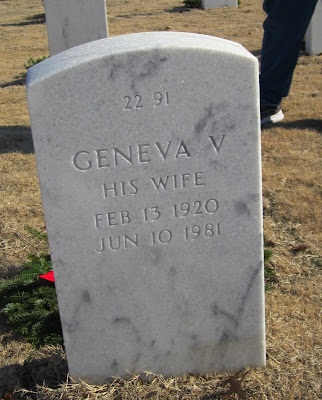 If you aren't familiar with a National Cemetery - the soldiers name is on the front and if his wife is buried with him, her name is on the reverse.  This is my Stepfather's Stepmother. 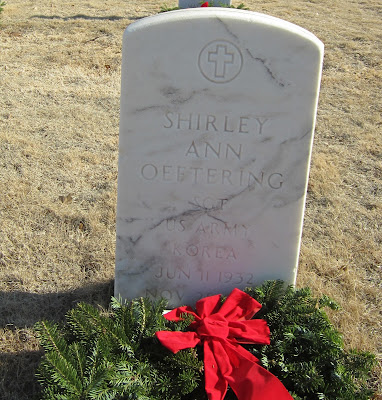 I thought this one was interesting.  Shirley Oeftering served in Korea. 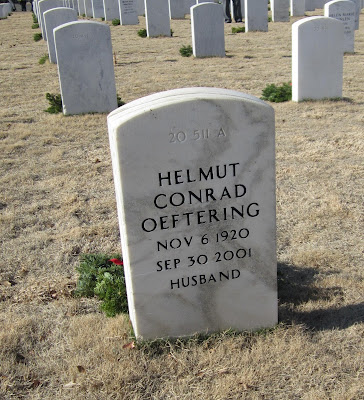 Her husband is on the reverse.  That was the only one like that I noticed all day. 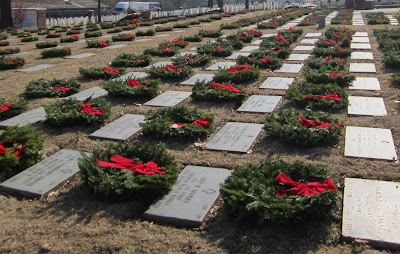 If you ever have the opportunity to attend a wreath laying or even to just visit the cemetery once it has been decorated, you really must do it.  It is awe inspiring and you won't soon forget it.
Posted by Shara at 10:09 PM