I have had the same wreath on the front door for the past few years.  As I took it out of storage today, I said, "I am sort of over this wreath" and threw it back in the box.  The Bean, who was helping me decorate, held up a plain evergreen wreath and said, "Here's a wreath." I said that it was sort of plain, but maybe I could do something with it later, so it would work.  Then I went back to my fluffing and displaying while he dug in the boxes of Christmas we had strewn across the driveway. 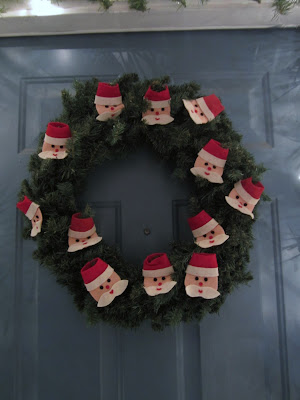 A little bit later, I noticed this hanging on the front door.  Love!  He had found a stack of vintage felt Santa napkin rings and put them on the wreath.  I never would have thought of it and I think it is adorable!  We might add in some mini red and white satin balls, but we might just leave it ala Bean. 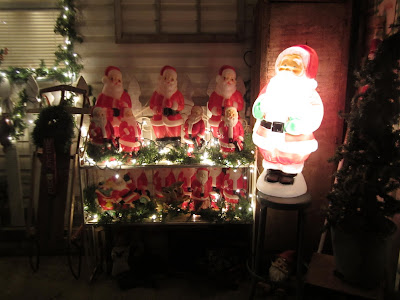 At the Flea Market I found a four foot tall Santa.......but I didn't buy it.  Can you believe it?  What was I thinking?  If it's still there next week, I'm buying that bad boy.  It was only $15.00. I really don't know what I was thinking..... He needs to go where that sled is.  He really, really does. (That sled is mine from my childhood.  On the bottom of it written in three inch high Magic Marker letters is my full name, complete address and phone number.  I really don't know how or where I thought I was going to lose my sled. But, if I did....I was prepared!) 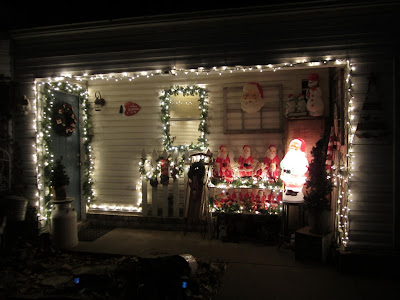 I could only decorate the front porch this year.  I usually have lights along the roof line, the garage and across the front bay window, plus luminaries and lights in the trees and a couple of those you love them or you hate them inflatables.  (I hate them, the Bean loves them). But, we recently had a power surge and it blew out the plug on the front porch, so I had to run an extension cord out the garage and rig it all hillbilly style.  I will NOT give up my Christmas lights for anyone!  (Remind me to call an electrician before next year, 'kay?) I was afraid to blow out the garage plug if I overdid it, but at least the porch looks pretty.

Today I finished outside and inside plus did my Christmas cards.  Now it's on to candy making and present wrapping.