Sometimes when I drag home some junk, I know full well that I am going to keep it,but I really don't know what I am going to do with it.  Often, I put it in my office/ebay room and it gets lost amongst the clutter.  As I have been cleaning and getting rid of things this week, I have rediscovering some of the things that I brought home.  Rather than re-piling it, I am trying to use it. 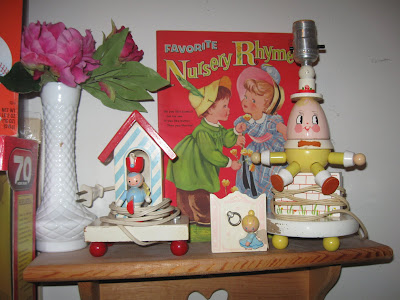 Two Irmi lamps, an Irmi baby mobile music movement and a favorite vintage Nursery Rhyme book - all on a shelf where I can see them and appreciate them now.
In the future, I want a longer shelf (one that does not have the 1990's heart motif) and it will be white.  And, hopefully *Fingers crossed* I will find a few more Irmi items to add to the mix.  But, at least they are together and organized.  And cute!
Please disregard the Sports Memorabilia on the side.  At one time, I tried to be nice and share this room and DH wanted Sports Memorabilia.  That was around the time when Mark McGwire was really popular and I thought he was particularly delicious, so we started a Mark McGwire collection.  Now that I have deemed this room ALL MINE, begone Mr. McGwire! 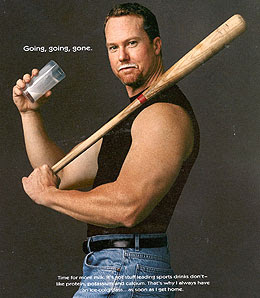 (Although, our big "Got Milk" poster will stay because The Bean and I started collecting Got Milk ads when they very first started. It also does not hurt that Mr. McGwire is some delicious eye candy in it.  :D ) 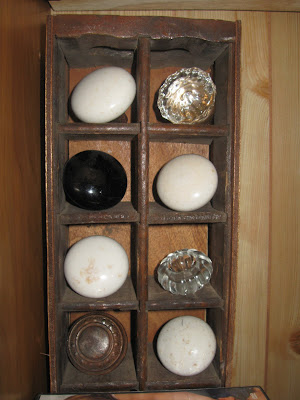 I bought this old carrier at a sale for $1.00  last summer.  It is for bottles of some sort, but it is a weird size and shape.  Our flat screen TV is smaller than our wall unit, so there are tall empty spaces on either side of it.  And, we can't have empy spaces in this house!  No sirree!  So, today I put the carrier on it's end and added in all the old doorknobs that I have found.  Love that rusty one, the glass one and the black porcelain one.  When we sold The Breadman's parents house, we stole the white knobs off the interior doors.  The man that bought it was talking about basically gutting it and modernizing it, so we knew they would end up in the trash heap.  So, we took them.  Someday, they will be turned into a coat rack.  After we sold the house, we went back to pick up some things and found nearly the entire inside of the house in a dumpster out back.  We pulled out some long pieces of molding painted a 1940's green and blue.  I want to screw the doorknob onto it and have a memory of the house.   Until then, at least they are on display. 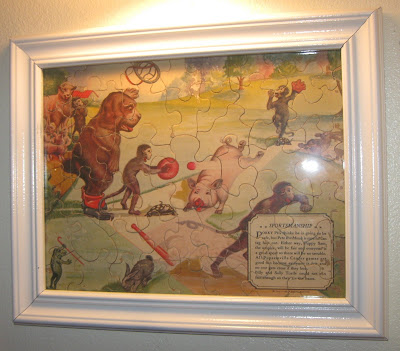 I bought a box of very old tray puzzles at a sale for 25¢ at some point.  Most of the puzzles are pretty faded, but this one with animals playing baseball is in good condition.  I didn't know how to appreciate it until today I realized I could frame it.  I had a black frame on hand, so I spray painted it white and then framed the puzzle.  I love the old graphics and I am happy that it is preserved now.
I didn't go junking at all this weekend.  Well, I take that back, I went to a Church Sale that has previously rocked, but this year, I only spent $1.35 for a pink beaded purse, a funky red and white toadstool-y necklace and a wee little RayOVac flashlight that is only about two inches tall.  Since the sale sucked, I lost my mojo and didn't go to any more sales.  I decided to come home and get rid of more things.  Shocking, right?
Oh yes - I did take my yard sale money for the weekend - $10.00 - and buy some scratch off tickets.  I played a $2.00 ticket and won $50.00.  My biggest win on one card so far!  Now, I have some serious pickin' money when the pickin' gets good again.
Posted by Shara at 11:13 PM