This weekend is Swap Meet Weekend. It is only held twice a year out at the Fairgrounds. It is small, but grows each time.  There are hopes that it will grow and become a huge event known across the country.  They have quite a way to go before that happens.
Yesterday it was open, but was really more of a set up day.  I did manage to poke around in some boxes and score a few goodies.  Most people are selling junk from their houses and are letting it go cheap.   There is one couple there that are selling antiques and they have high prices, but some deals mixed in too.  The husband is more willing to deal than the Missus.  She is really set in her prices! 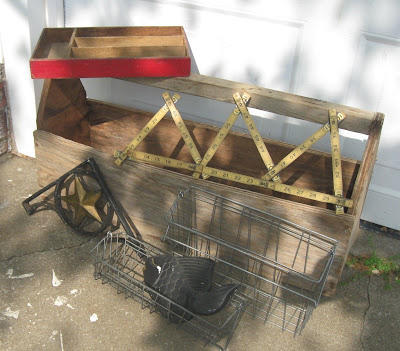 Here is what I bought yesterday.  Sorry for the shadows.  Two neat old wire baskets for 50¢ total, a cast iron corbel with a star for $1.00, a folding ruler for $1.00, a HUGE toolbox for $2.00 and a vintage cutlery drawer for $4.00.  The drawer was a bit overpriced from one dealer, but the toolbox was cheap from another, so it all worked out in the end.  Oh, I almost forgot the chalkware fish for 25¢.  Poor little guy.
Today it was pretty cold - only 54 degrees in the middle of May.  It was dry when we got there, but it started sprinkling more and more while we shopped.  We took a PB&J break in the car and it started raining pretty good.  Most of the vendors started covering up their stuff and leaving, so we left too.  But, I did manage to score some good stuff before that.  With not too many customers, the dealers are wanting to get rid of stuff so that equals cheap prices. Yippee! 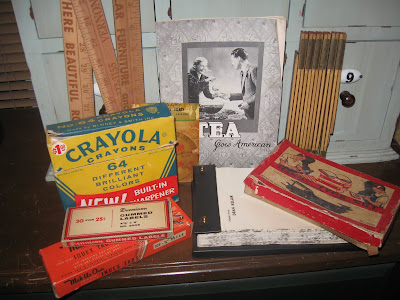 Two more folding rulers - both from the same booth as yesterday - $1.00 each.  I know personally own a dozen folding rulers.  I think that is enough.....isn't it?  (Although, I will never leave one behind for $1.00!)  Everything else was from a dealer that announced, "Everything is a quarter."  Be still  my heart.  She didn't have it all out yet, but I found a lot of neat old office supplies including a mini printing set, old box of crayons, Dennison gummed labels, a thick notepad with some guy's name on it - fun for ebay notes, a cookbook for Tea - scones, cucumber sandwiches and the like.  I also found a big stack of vintage Christmas Seals including an unused page from the year I was born that is destined to be framed. 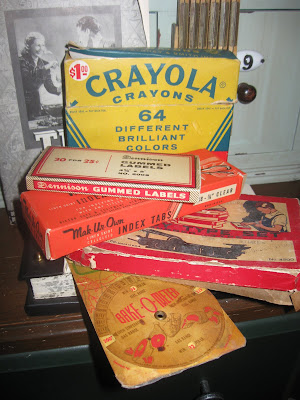 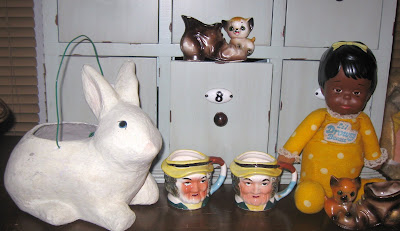 The paper mache bunny and Drowsy Bean doll were from the 25¢ booth.  The other items were from a booth where everything was a dime.  Why, oh why would you schlep all your junk all the way to the Fairgrounds, sit in the hot/cold/rain for three days and then sell it all for only a dime?
As we were about to leave, we spotted a table full of junk mixed in with one of the tables of car parts (the Swap meet is half junk, half car parts), so we went to look.  As The Bean sorted through some old pottery marbles, I took a look at a Rickshaw on the other side of the table.  Yes, a real Rickshaw.  It was awesome.   When I walked away from the rickshaw, I spotted a big box full of old Anodized Aluminum Tumblers and pitchers.  Old metal tumblers are high on the list of "finding things my Great Grandma used.".  When the guy running the booth finally came back over, he gave The Bean the marbles and starting making small talk with me.  I commented that the metal cups were neat and finally, I bit my lip and asked how much they were.  I have seen one tumbler for $5-8 at the flea market.  I've seen pitchers for $20 and up.  I could see three pitchers in the box and a lot of tumblers.  So, I knew it would be pricey.
He paused a minute, then he said, "$5.00."  And, I said, " For............?"  Because you never know if that means for each piece or for each set of for exactly what.  He said, "For it all."  "HERE IS YOUR FIVE DOLLARS MISTER!"  He said, "I will probably get home and my wife will tell me they were worth a lot more that than."  Yep, probably Mister, but ADIOS, I am out of here. 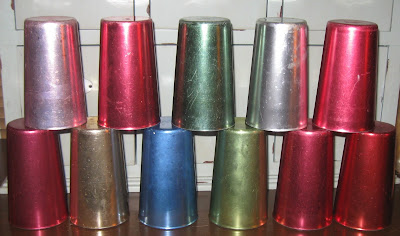 In the end, I had eleven Basal tumblers in a variety of colors. 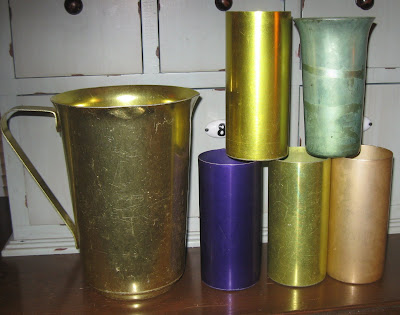 A gold-ish pitcher and more tumblers. 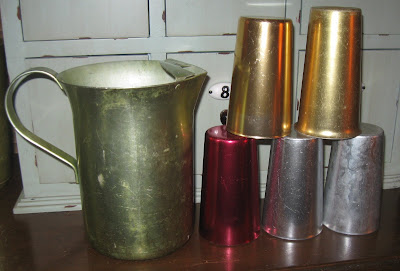 A green-ish pitcher and even more tumblers. 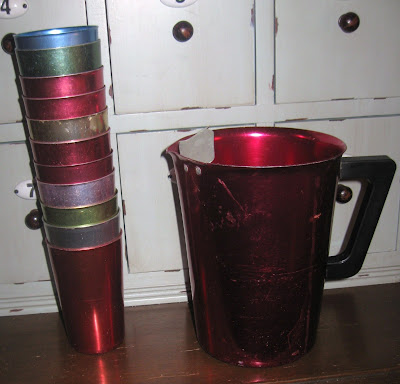 A red pitcher with what I think is a Bakelite handle and the cups from the first photo.  Three pitchers and twenty one tumblers in all.  The Deal of the Day!
We might go back tomorrow - it is supposed to be dry but cool - a perfect day for junking!  Plus, there is the Kiwanis's sale at the Boys and Girls Club.  Junk, junk, junk!
Check out more Thrifty Finds @ Southern Hospitality and Apron Thrift Girl Thriftshare.
Posted by Shara at 10:47 PM