About fifteen years ago, my Grandmother bought an RV.  It was her dream to go "tooling" about the country.  For safety, her plan was to travel with one of her three grandsons.  But, they weren't always available when she wanted to travel.  One day she was reading her "older people" catalogs  filled with items such as tools for putting on socks, microwave bacon cookers and magnetic jewelry she found just what she needed - a fake male traveling companion. And then, she ordered him. 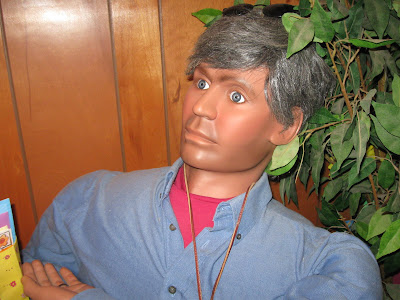 Meet Mr. Van Damme.
That's what she named him - after Jean Claude Van Dam
Mr. Van Damme traveled with her in the RV a number of times.  When she sold the RV and moved to Arkansas, he moved with her and into the house.  He sat at the corner of the dining table by the window. The family all got so used to him that it was like a potted plant sitting there.  But,  every single time that I was there and a repair man, a caregiver, the Meals on Wheels people, the UPS guy or a neighbor would come into the house, they would grab their heart and say, "Oh that man scared me!".  He-he  It was kind of funny.
When it came time to clean out the house, we had to find a new home for Mr. Van Damme.  What would we do?  Stick a price on his forehead?  That seemed sort of odd. Shoving him in a trash bag and donating him would surely end up in an arrest of some sort, I am sure.  One day, my dad asked about Mr. Van Damme and asked if he could have him.  My Dad likes quirky things and has a mannequin and other "friends" in the house. 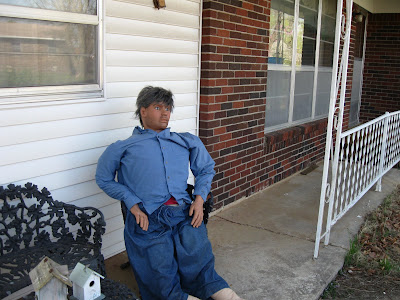 So, I drove out to the house one day and brought Mr. Van Damme outside for the first time in about ten years.  He enjoyed sitting on the porch. 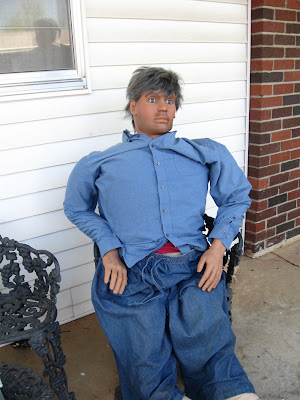 His wardrobe was a bit out of fashion after all these years.  Not sure what to think of his pants. 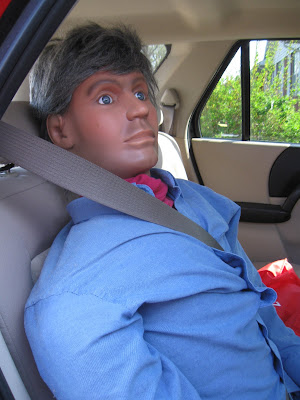 Loaded up in the car for a ride to his new house. 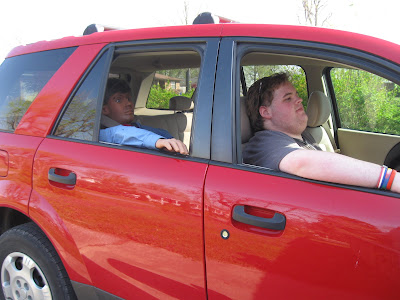 The Bean feeling safe and secure with his traveling companion in the backseat. 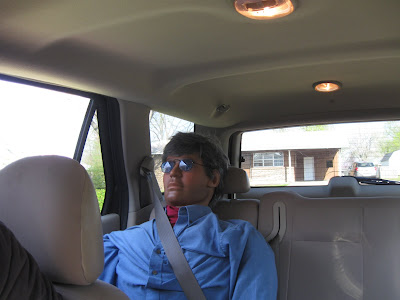 The sun is bright when you have been housebound for ten years!
We went home for the night before I delivered Mr. Van Damme to his new home the next day.  But, not before he scared me about fifty times in the rear view mirror while I was driving and again while parked in the driveway overnight.  He gave me the heebie-geebies! 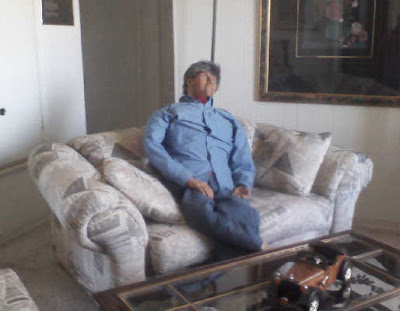 Mr. Van Damme in his new house with my Dad.  He has now moved him into his Bar.  Now Mr. Van Damme is a bartender!  He worked his way up from Security to Bartender!
We are so proud!
:)
Posted by Shara at 11:06 PM