A Different Kind of Junking

The Corp of Engineers is letting the water level down at Beaver lake.  Beaver Lake is a man made lake.  In 1966, the same year I was born, but before we lived here, they made Beaver lake.  They flooded 28,370 acres of farmland. People moved out of their homes, but the homes remained, the barns remained, the junk piles, the fences, old cars and tractors - it's all under the water now.  And, when the Lake goes up after lots of rain, stuff pops up.  And, after the water level drops down, things appear n the shore. it's become sort of a family tradition with me, The bean and my Dad to walk the shoreline to see what we can find.  Usually, it's old bottles, old jars,

I lived out at Beaver Lake for my entire childhood and my Dad still lives in thee same house. His hobby is driving round the lake. A lot. Around and around this way and that way. When we went out at Christmas, the water levels were up over the picnic tables and across the roadways. He called me on Wednesday to tell me that the water was dropping fast and lots of "junk" was starting to float up and lay on the shorelines.  That was our cue to haul it out there Pronto! 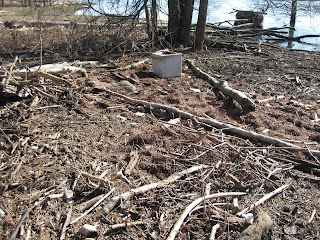 As you can see, there are a lot of down trees,sticks, driftwood, stumps and other things.  Beer bottles, Gatorade bottles, Bic Lighters and flip flops are a common sight.  Hmmm...what's that square thing in the middle?  Let's check that out. 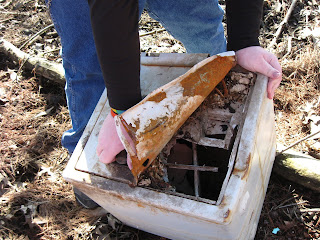 My dad says, "What is it?" I answer, "Some sort of box."  The Bean practically squeals - "That's not a box!  That's a SAFE."  Oh my God!  How may times have you dreamed of finding a SAFE????  The door had been peeled open with a crowbar and it appeared to be full of leaves and water.  So, it was obvious that it had been stolen, opened, emptied and then dumped in the Lake.  But, come on, it's a SAFE, we had to check it out. Just in case.  You never know, right?

I had my old lady "get things off the top shelf" grabby tool with me, so I stuck it in and started pulling out the leaves.  Then I heard a *clink* so I got excited and dug in deeper.  The clink turned out to be car keys.  A bunch of car keys all on different rings.  Then I pulled out a few credit cards, a Credit Union Credit card, some soggy receipts, a smushy paper bag and some more leaves.   I was just about to quit, because it was obviously empty.  Then I saw a flat black book which  thought would be an Address Book sort of pressed against the back wall, so I gabbed it and started to pull it out. That's when I realized I saw COINS.  I started yelling, "It's MONEY, It's MONEY".  I thought we were all three going to have a heart attack! 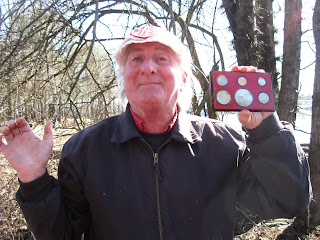 It was a 1973 Proof Set consisting of a Silver Dollar, Half Dollar, Quarter, Dime, Nickle and Penny.  Face value $1.91, Collectible Value about $10.00, Best Damn Exciting FUN we ever had = PRICELESS!  Can you believe we found a SAFE and there was MONEY in it?  Holy Craaaaaaaap.  (That's my Dad holding it). 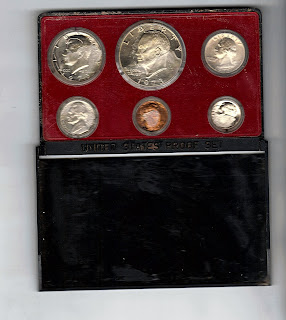 I do have names from the Credit Cards, so I am going to try and find the owner.  The coins aren't worth much, but they might be from  the year he was born or something.  I'd love to know the story of the stolen safe.  The Credit Cards aren't even expired yet, so I know that it hasn't really been that long since it was dumped.

Whew.  That was FUN. 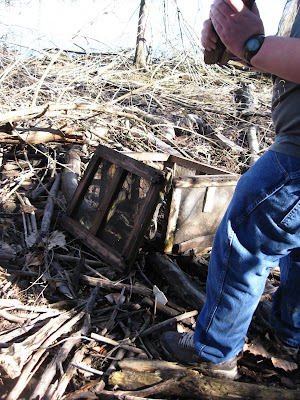 After that, all the other junk, well, looked like.....junk.   We did find a cool handmade box of some sort.  It was all weathered and had awesome old hinges from an old ice box on it.  It was bogged won with lots of leaves and sticks and pretty dirty.  It was also pretty far inland and away from our car so we had to leave it.   I wish we could have gotten it home and worked on it a bit - new screen or chicken wire.  It would have made a neat old display piece.  I don'think anyone else but me would have ever found it let alone appreciated it.  So, The Bean whomped on it and got the hinges for me.  It really was a fun day out in the sun and by the pretty lake.  The level is expected to drop seven feet a day for the next two weeks, so I'm thinnking another trip might be in order!

****Update:  My Dad lives next door to a Sherriff's Deputy.  He told him about the safe, where it was and turned everything over to him.  We are off the hook and did the right thing.  But, it was still EXCITING!