When The Bean was in public school, his class would go to a lot of plays and events at the Arts Center. I always chaperoned on those trips and I was even a Substitute Teacher for a few trips. ("Stay close to Miss Shara, I don't want to lose anyone!" I would say. I seriously freaked those poor kids out thinking that I would forget them when they went to the bathroom!)
We both missed our culture "Fix". I decided to pick up the phone one day and call to see if Homeschool kids could ever come to see things. "Why of course!" they replied. The best part is that it only costs $2.00 a person to go see these things! Last month we went to see an African Drumming group. That was very interesting. Today we went to see "The Best Christmas Pagent Ever". 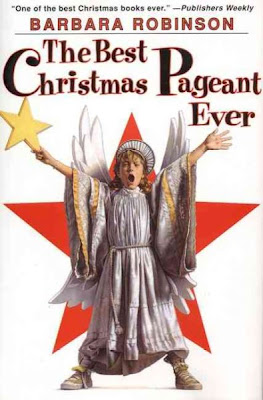 It is a really good play and book if you aren't familiar with it. The Herdman kids are known as the town bullies. They are dirty and wear torn clothes. They get a Welfare basket. Child services frequents their house. The other kids dislike them, mostly because they don't understand them. The Herdman kids start going to Sunday School because they hear they serve Twinkies as refreshments. The decide to get involved in The Christmas Pageant so none of the other kids want any part of it. Everyone assumes that the Herdman kids will make it the WORST Christmas Pageant EVER, but, in fact, it ends up being the BEST Christmas Pageant EVER. It was really well done and we enjoyed it very much.
Before the play started, I had just enough time to run into the Hospital Thrift Store near the Arts Center. I have been going to this thrift since I was a little girl, but I don't get there very often anymore. When we walked in, the lady at the register told me that it was "Wacky Wednesday" and they had some specials. All Christmas clothing was half price (No, thank you) and all the glass Christmas Balls were half price. (LET ME AT 'EM!) 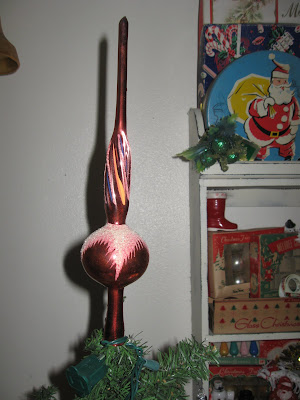 The very first thing that I spotted was a....vintage...tree...topper. A PINK vintage tree topper, at that! My first! I say my first, because I need more. Maybe twenty or thirty. But, for now I have ONE! It was $2.00 and I got a long lecture from the Wacky Wednesday Woman about how "a man brought that in yesterday and said it was in his Mother's attic and he remembered it being on their tree for at least 60 years." Odd that he was so sentimental about it as he donated it to the thrift store. Ahem. Anyway, I love it and it will be in my house for 60 years. (Yes, I do plan on living until I am 103. Thank you for asking.)
I bought all the glass ornaments that were in the entire store. You would think since they had deemed it an item to feature for Wacky Wednesday that they would have had troughs full of ornaments. But,they only had two small plastic bags and two boxes of ornaments. Odd, right? 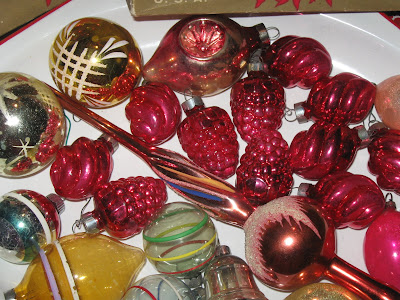 But, the ones I found are completely awesome! These were in the two plastic bags for 75¢ and $1.25 each, but half of that. (I do so love seeing people try to figure out half of 75¢.) 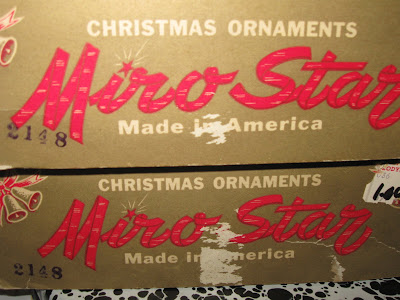 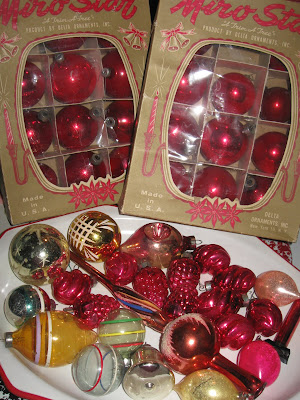 I paid $4.00 total for everything shown. A well spent $4.00, if I do say so myself. I really have enough ornaments, I suppose. But, as long as I can find cool old Shiny Brites and indents and figural ornaments for cheap - I will bring each and every one of them home. Each and every one!
Posted by Shara at 9:54 PM