I've been trying to hit the thrifts this week. I have so much vintage Christmas, but I want more. And there is only a small window of opportunity for finding Christmas items at the thrifts - so I have to hit while the iron is hot. I always peruse the Christmas first, then I attempt to clear my head and go through the rest of the store as normal. But, honestly, I can't get the Christmas stuff of my brain to even look at the rest. 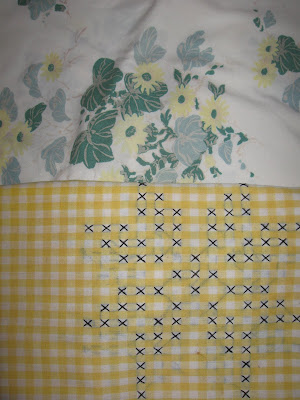 I did manage to clear my brain long enough to find a sweet vintage floral tablecloth and a gingham tablecloth with chicken scratch embroidery on it. The gingham one isn't my usual type of tablecloth, but it was sweet, it was a quarter and I have a prety big collection of gingham aprons......so I had to pick it up. 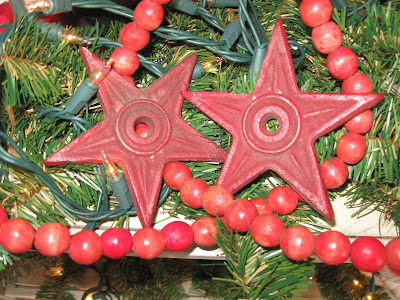 Also, not on the Christmas front, although they could be used for Christmas - two old metal star tie rods for 50¢ each.
And, now.....on to the vintage Christmas finds. 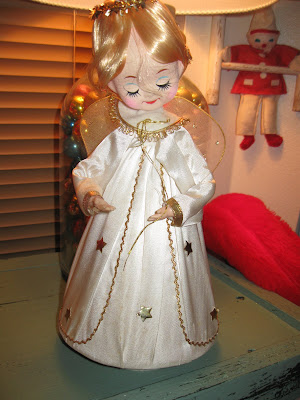 This JAPAN angel was at the Salvation Army for $3.00, but everything was half price. I'm planning on listing a lot of Christmas on Etsy all year long, so I am picking up things when I find them now. Oh yes, she is a musical too. 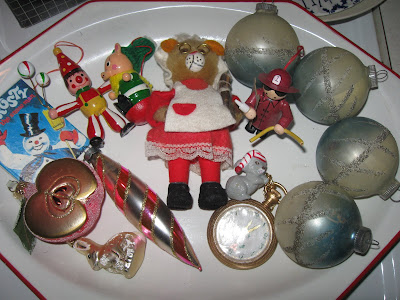 Miscellaneous ornaments all for 12¢ each - half of 25¢. I am starting to be sucked in by the cuteness of all the wooden ornaments from the 1960's-70's. I so do not need another thing to buy! 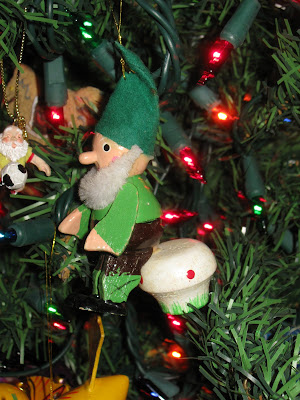 This funny elf/gnome on a toadstool was a particularly happy find. 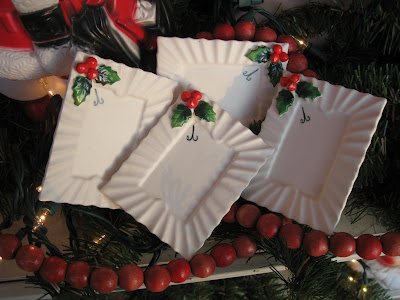 Yesterday I talked about my love of Holt Howard. Apparently the thrift gods were listening because the very first thing I found today were these set of Holt Howard dishes. Actually, I think they are ashtrays, but I will pretend they are wee teeny bonbon trays. 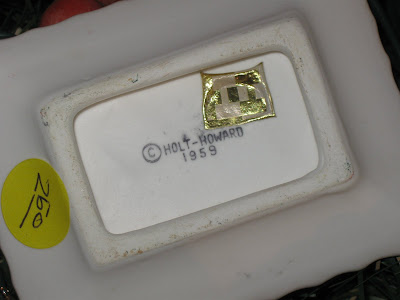 See? Holt Howard. 1959. Great markings and the original sticker. Each one was priced $2.50, but I took a chance and asked if that was for each or for the set and the lady said, "Oh, it must be for the set, don't you think?" This was at the habitat for Humanity Thrift Store which I rarely frequent so I I really don't know what their pricing structure is - I think they might have been $2.50 each based on the other items I saw. But, I agreed, because I wanted them. But, I would not have paid $10.00 for them!

Now, for a few thrifty finds, but not from the thrift. I actually bought these on ebay. I never buy on ebay or Etsy, I just buy what I find that I can afford around here. But, every once in awhile, I do a search for "Annalee lot" just to see what pops up. I got lucky earlier this week when I spotted a Buy It Now for four Annalee's for only $9.99. I Bought it NOW! 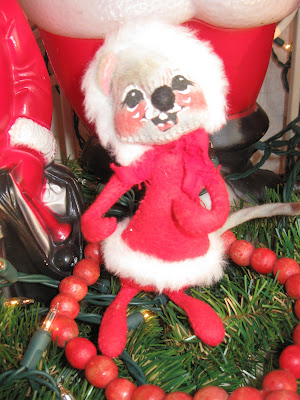 A sweet mouse in a Santa suit. 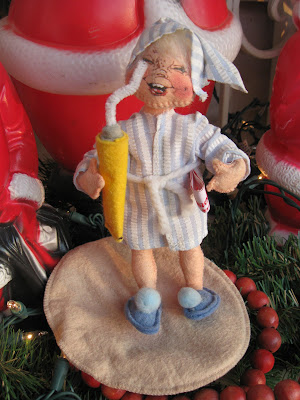 A funny guy in a nightshirt and slippers. Lovin' that huge candle! 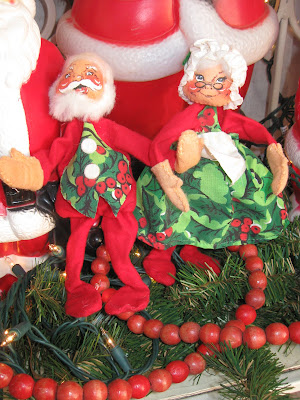 And, Mr. and Mrs. Claus. Merry Christmas to Me, Love Me!