I had a few surprises in my finds this week. When I picked up this old Tripoley game at the Super Cheap Thrift, I knew it felt particularly heavy. It was taped up with masking tape so I could only peek in the corner at the thrift. Inside I could see a set of tiny dime sized poker chips, an old deck of cards and a slew of bright shiny silver coins of some sort. So, I decided to pay the $2.00 and see what was in it at home. 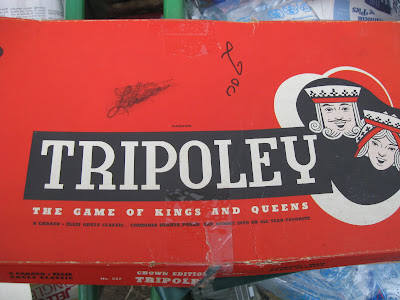 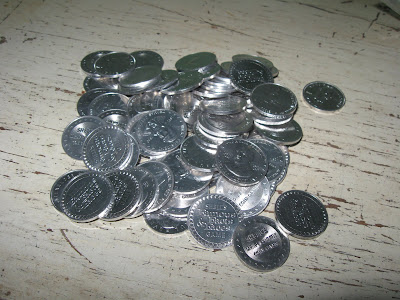 The silver coins turned out to be some sort of game tokens from Shell Gas Station in the early 1960's. There was a ton of them - they feature Presidents, States, Famous Events and Famous People. The Bean and I had fun sorting them out. There was one Benjamin Franklin so The Bean took that one as his own. He loves Benjamin Franklin. First - he is our cousin so that makes it personal. Second, he was a Freemason and the Bean is obsessed with the Freemason's. He wants to become one when he is old enough, but you have to be invited to join, you can't just show up. (So, if anyone knows a Freemason - could you throw The Bean a bone is a few years? Thanks!) He has an impressive collection of Freemason items that he has found at sales. He picked up a penny one day in a parking lot and it had the Freemason symbol on it. I think he was meant to be a Freemason. 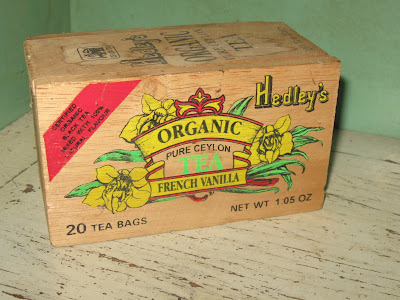 The second hidden surprise came today at a rather junky sale. I have a habit of moving all wooden boxes and tins a bit to see if they are empty or full. I have found many a tin of buttons and other interesting things in tins and boxes, so I always check. When I went to scoot this tea box over, it wouldn't budge. So, I picked it up. Once again, I saw a glimmer of lots of silver, so I quickly closed it, paid the 10¢ and left. 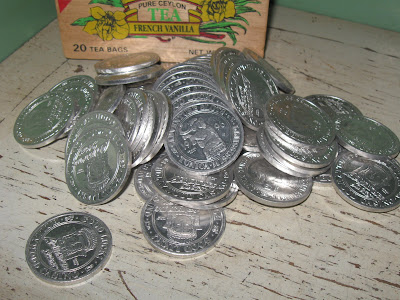 I'd like to report it was full of silver coins or silver dollars, but it wasn't. What it was full of was $1.00 Casino tokens from a bunch of different casinos. A lot of them! I can't figure out why someone didn't cash those bad boys in before they left town! I don't think they are worth their face value anymore since casinos don't take tokens. Still, a fun find. And especially for only 10¢!

On to the rest of the finds: 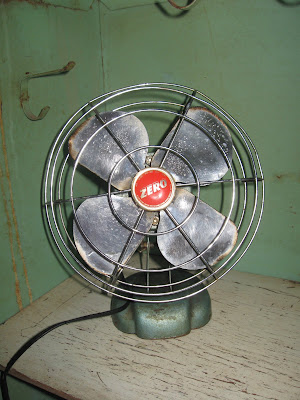 I walked past this old Zero fan several times before it registered to me that it was an old fan. I plugged it in and it works, although the big fat round plug cares me a bit. It blew cold air and it blew it hard. It nearly blew my wig off!* I cleaned it up and it is really quite cute. I have several old Zero fans out in my shed to be resold, but dang, those things are heavy. This one is small so it will be easier to ship, if I find it is worth selling. 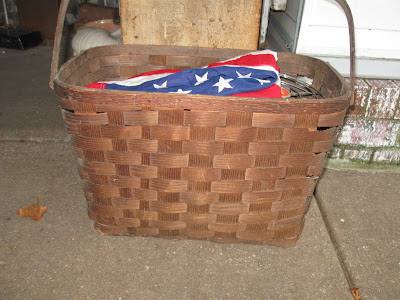 I spotted this nice old double handled basket at the Habitat Restore near the table where they do their pricing. It wasn't priced yet, so I asked if it was going to be for sale. The lady said it had been sitting there most of the day, but she just hadn't gotten around to pricing it. She told me $3.00 and I picked it up to go pay for it. For something that had been sitting their un-noticed all day, it certainly became popular once I had it hooked over my arm. "Oh, that is a great basket!" My, what an old basket!'" "What a lucky find for you!" It was really kind of funny because even though I did like it, I think everyone else thought it was a lot nicer than I did and I was the one actually buying it! 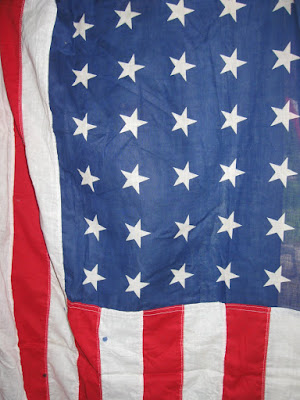 A nice old 48 star flag for $2.00. It will go into the Patriotic decorations. I don't have anything against Alaska and Hawaii - I just liked finding an old flag.

I went to one sale that had the obligatory FREE box at the end of the driveway. But, beside that one was another...and another...and another...and then two tables full of stuff - all FREE. I was a proper customer and looked at the priced things first, paid for them, then made a beeline for the freebies. It was mostly junk, but I found a few goodies. 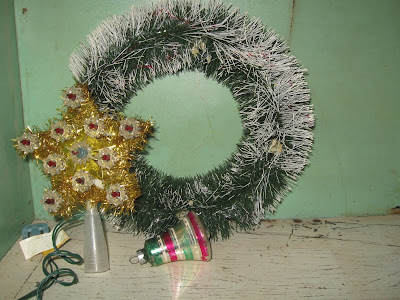 On old tinsel tree topper, a bottle brush wreath in dire need of some TLC, a bunch of glass ornaments (older, but not interesting. So therefore, not photographed) and one old Shiny Brite bell. The price was certainly right! 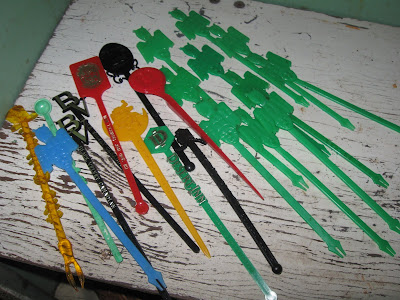 Also from the FREE bin - a baggie full of swizzle sticks - one from somewhere in Alaska, various airlines, restaurants, etc. Another thing to sort and research.

The rest of the finds: 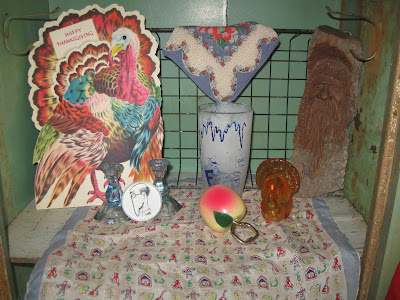 Mr. Turkey (50¢) that warranted his own post yesterday, an old wire letter basket (I love those things) (25¢), an old floral hankie (something I swore I would never collect. But, I seem to have about forty now.....) (25¢), an old glass with a Kitchen Soda Fountain recipe on it from the Dairy Guild (50¢), a cool gnome face carved into Cottonwood bark($3.00), a glass turkey (25¢), a bottle opener with a wooden peach handle (25¢), a little old handheld puzzle from Germany(25¢), a sweet scarf (25¢) and a set of wee teeny blue glass candle holders (30¢). The puzzle was in a baggie full of junk including a bunch of Elvis stick on tattoos. I tried to apply various Elvis tattoos to my arm today, but to no avail. I soooo wanted to ask The Bean if I had ever mentioned my tattoos, then pull up my shirt sleeve to reveal a big ELVIS profile. Darn cheap tattoos anyway. ;o( 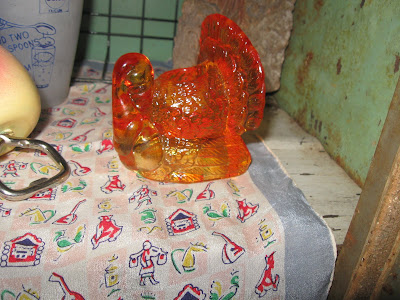 Here's the glass turkey. I liked the colors of him. I do have a small collection of turkey's - mostly planters and single salt and pepper shakers that I have picked up here and there. With the turkey standees and this glass turkey, I have enough to fill up my shelf now. (And, Sue, I am sorry that Tom Turkey stole your birthday thunder....) And, lastly, a piece of old white pottery with a pretty blueish green glaze inside. I am not sure that I can squeeze one.more.piece of pottery on my shelves. (Photos are on the side bar of all my shelves of pottery) But, I will try! If you hear a *crash*, cover your ears, because the cussing is about to start!