I have gone to the Rodeo of the Ozarks parade every year since 1973 except for one. I have only missed one parade in 36 years. It is held on the first of July and again on the 4th of July every year. We went to the parade on Wednesday and for the first time ever, we are going again tomorrow morning. Two parades in one week. 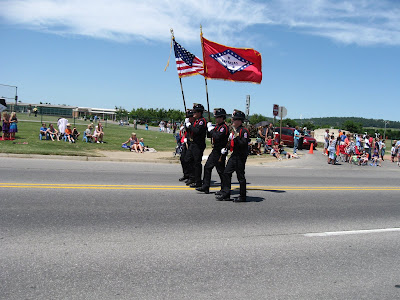 First came the flags. I stood up with my hand on my heart, but most people did not. You are supposed to stand up when the flag goes by! Please do it, if you don't! (I bet my readers do, right?) 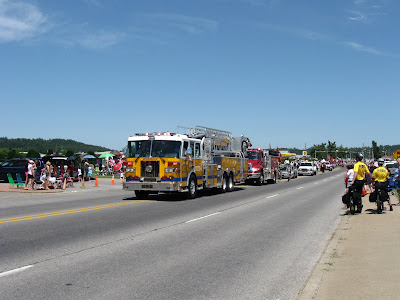 Then the firetrucks and police from every local town, city and county. (I've often thought this would be a good time to knock over a bank.) 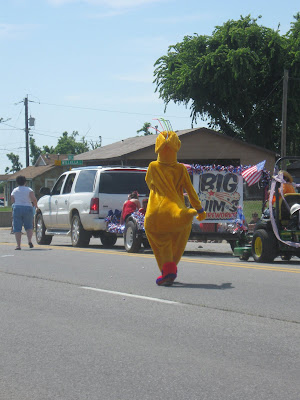 I call this, "Heatstroke about to happen". It was 94 degrees and this poor sap was in a full on furry suit walking the two mile route. 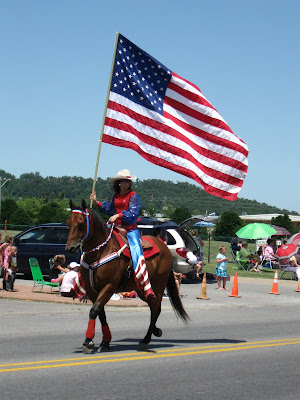 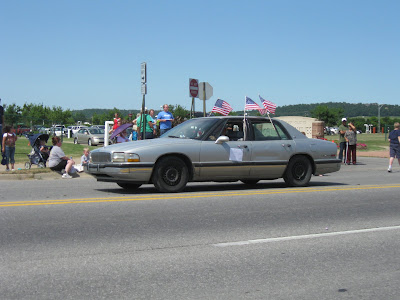 This very non-parade looking addition absolutely cracked me up. Such a sad old car, no hubcaps, old man at the wheel. What's that on the door? A piece of typing paper with something written in pencil? 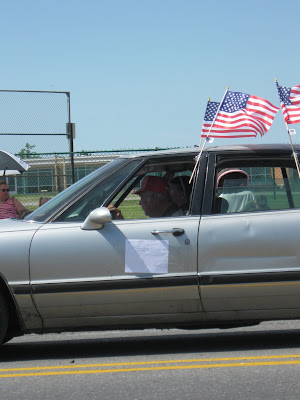 No one would ever be able to read this. Luckily, I had a zoom so I could tell it was an ad for the man's window washing business. With a get-up like this, I can imagine their attention to detail on window washing would be impeccable. (My Mom thought of that!) 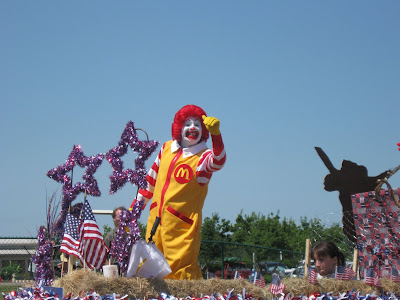 This is our local Ronald McDonald. He is the Ronald McDonald for all the local McDonald's and has been for years. When I snapped this photo he looked straight at me and said, "Did you get it?" Then gave me a thumbs up when I said I had gotten it just fine. He is a very personable Ronald. I like him. 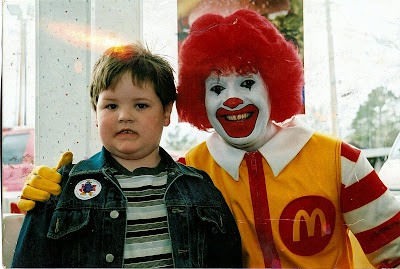 Here he is many moons ago with a Young Bean. Ronald looked at The Bean, looked at me, looked at The Bean again, back at me and said, "He knows I'm a clown, right?" Poor Bean, he said he really thought he was smiling. He looks less than thrilled to be with Ronald.

Oh yes, back to the parade.. 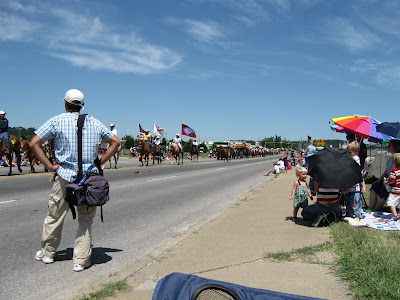 I wasn't too happy when this guy decided to stand right in front of us. But, then I realized that he was a reporter and maybe, just maybe we might make the newspaper if he took a photo in just the right place.
I thought that same thought ten years ago and found this on the front page of the paper the next morning. 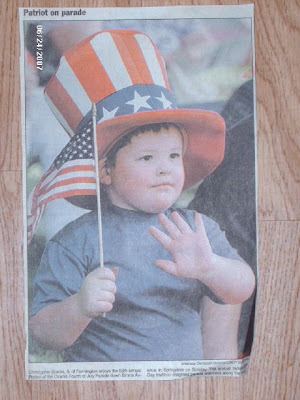 It could happen again, right? So, here is the photo that was on the front page of the paper the next day. 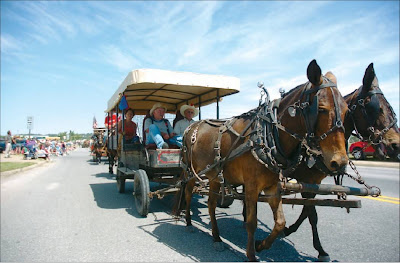 Look in between the horse's heads. OUR CAR. We are almost famous. I can't tell you how many times our car or The Bean's foot or my Step Dad's arm has made it into the paper. I have a whole collection of photos of our almost famous photos. So sad. 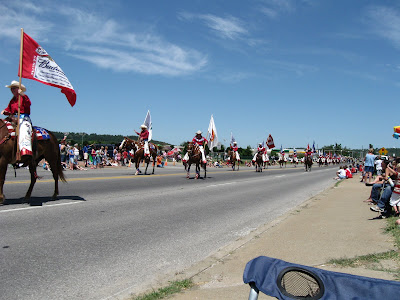 Since it is the Rodeo Parade, there are generally over 1,000 horses in it. We prefer to sit at the very beginning of the route before they the horses get hot, temperamental and, well, you know, have to poop. Right there in the street. The hot street. *Plop* 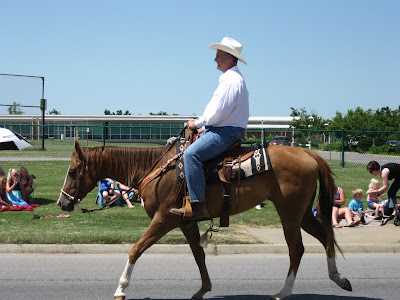 This is the Mayor. He said he would rid a horse in the parade since that was the tradition. He said in the paper that he rode a lot as a kid. "Of course that was at the grocery store and it took a dime to ride," he said I found that pretty funny.
So, there you have it. You have now been to the Rodeo of the Ozarks parade. Maybe I will have more photos tomorrow (it is actually good size parade - it takes nearly an hour to pass by - I just don't take photos of everything.) Last year the local famous big TV family came and sat next to us. We watched them more than we watched the parade. Who knows what will happen tomorrow!
Happy 4th of JULY! Be safe and have fun!
Posted by Shara at 9:43 PM