I've never really had much to display at the 4th of July or for any other Patriotic holidays. But, what better way is there to get some new holiday inspired goods than to join in a swap. Or two. I was already involved in one 4th of July Swap and then I got the invite to be part of The Goodness Girls and the Hurrah for the red, White and Blue Swap. So, had two partners for two different yet similar swaps and for some reason I could not seem to keep them apart in my head. I couldn't figure out why until I took another look at both of their actual names - not their blogs, not their emails, but their names. Well, no wonder! I am swapping with Allison and Alison. Whew. I thought I was getting old or something...... 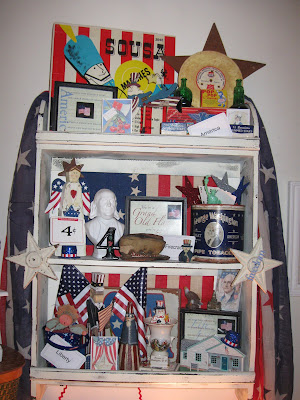 Since I was hunting and gathering for the swaps, I started seeing things in a different light and discovered I had many unique things to use for my Patriotic display. I have this one shelf and corner of the living room that is designated for holiday decor and it had looked pretty darn bare since Easter. So, I filled it up! 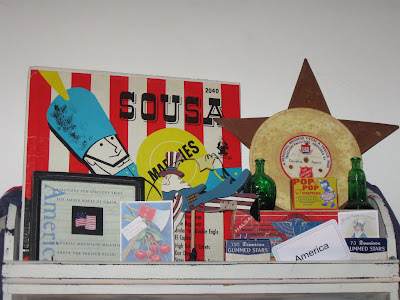 I found quite a few things while digging in my stash. I bought the Sousa Marches album at the Salvation Army last week for 50¢. It added just the pop of color I needed on that shelf. The white record on the right is a Serviceman's recording to his family during WWII. Oh, how I would love to hear it, but it is pretty scratched up (and I don't have a record player anyway). I added in a big rusty star, some old figural bottles shaped like the Liberty Bell and Benjamin Franklin, a box of Magma Eagle Dominoes and some old Dennison Gummed Star Boxes 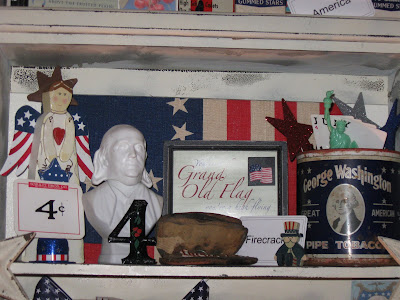 When I spied that George Washington Pipe Tobacco tin on my shelf with my tin collection, I knew I had to make a Patriotic display. That started it all! The Benjamin Franklin "bust" is an old Avon bottle that The Bean bought at a yard sale. (Benjamin Franklin is our cousin, 14 times removed, so he likes Ben Franklin stuff). That's on old pair of bifocals in the case by Ben. I just bought a bunch of old grocery store price tags on Etsy and that 4¢ price tag was in there, so why not throw it in? I have a whole set of those black letters with cherries on them. A four with cherries by George Washington? Well, that's perfect. 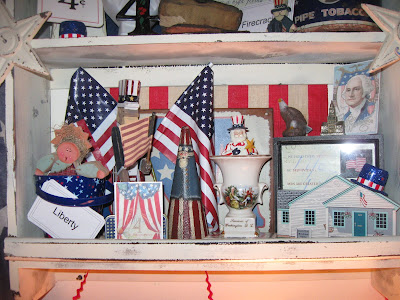 The urn in the center is a vintage Souvenir of Washington DC with Ole George and Martha on it - part of the $1.00 bag sale at the Church Sale last week and the house is Bill Clinton's boyhood home in Hope, AR - picked up for 50¢ at the Church Sale too. I threw in some flags, glitter, stars, a few reproduction postcards that I printed out and some flashcards that I made and ta-da. Patriotic bliss. The Flashcard sight is a homeschooling site that I use, but you can just type in a word or phrase on each line and they will print like those old one worded flashcards. You don't have to think of a question and answer. I printed mine on cardstock, but I think parchment or better yet, an old Manilla folder would be perfect. I cut them out and used a corner rounder punch to make them look authentic. I have lots of ideas for more holiday flashcards now. 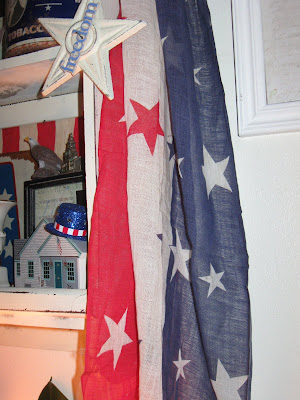 Not too long ago, my Grandmother had a pile of things ready to go to the Thrift Store as donations. Knowing my very unsentimental Grandmother, my Mom and I asked if we could see what was in there. We discovered my Great Uncle's WWII Navy uniform, various pieces of my Great Grandmother's and Great Grandfather's clothes, including a snappy pair of red men's flannel PJ's from 1950, and an assortment of other really cool vintage clothing and linen items. Needless to say, we kept it ALL. I also found this long piece of flag inspired organza type material in there. I don't know it's use, if it was military or just fabric yardage, but I love it. 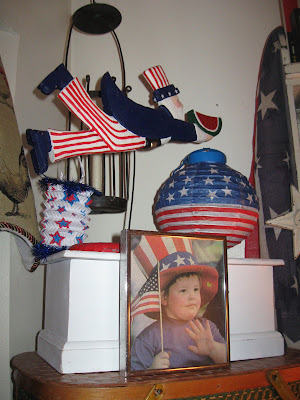 Some paper lanterns, an Uncle Sam and the Baby Bean when he was 3 years old and on the front page of the state-wide newspaper. A famous Bean! 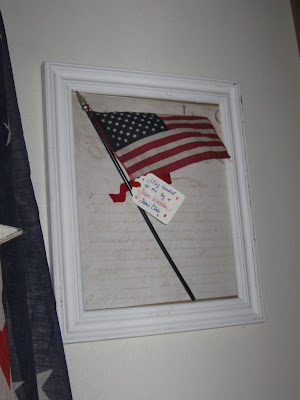 This is just a little cheapy flag, but it has a history that only I know. I've always kept track of it, but this year, I decided to mount it and label is so it can't get lost or forgotten. Here's the story - One summer in the late 1980's, I had a job at Sam's Club doing Demo's. It was a brand new store and just opening for the very first time. We had a big Grand Opening Ceremony and since I live in the land of Wal-Mart, Sam Walton himself was there. He came charging out of the backroom waving a small flag with the employees behind him cheering and yelling the Wal-Mart Cheer. As he passed me, he handed me the little flag he was waving. A billionaire once held that flag, so it's good enough for me. 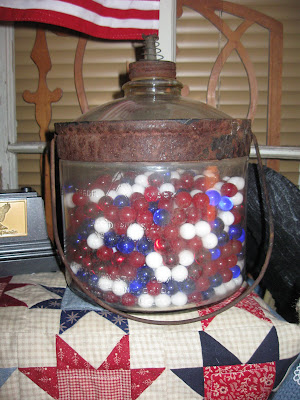 And, lastly, (and I know you are glad I am done) is an old glass propane stove that I bought recently at a yard sale for $5.00. I thought it would make a good lamp or display piece. For now, it sits on a patriotic doll quilt and holds The Bean's red, white and blue marble collection.