Today I followed signs that said "SALE" this way and that way from a different direction than I normally travel. When I finally found the sale, it was a warehouse sale that I have been to many times. I always find something, but nothing overly exciting. In fact, I had decided not to go back since they have it all the time. It is a yard sale, but it is in a 5,000 square foot warehouse and that place is stocked to the gills with stuff. The ladies that run it buy storage units, then sell off the furniture, pawn the electronics, sell the jewelry and then the rest of it goes to the warehouse sale. They have it every Friday and Saturday and I cannot imagine why the city hasn't shut it down yet since they don't charge sales tax.

But, since we were there and The Bean usually finds a book or a puzzle there, we went in and had a looksie. I did find a few cool vintage goodies and I was pleasantly surprised. I have never found anything vintage there. Now, I suppose I have to go back! 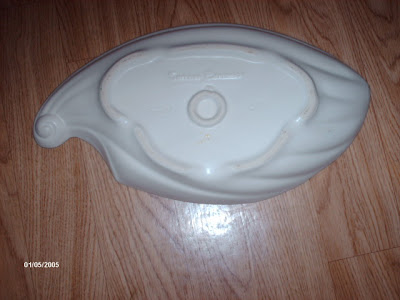 I found this great old piece of Matte White Pottery for 45¢ yesterday at the Super Cheap Thrift. I was taking my third stroll down the knick-knack aisle when I spotted it lurking behind a bunch of those green floral vases. It's a beauty with it's swirly seashell look I think it was made to sit up on a bookshelf or on a TV as all the design is on the bottom. 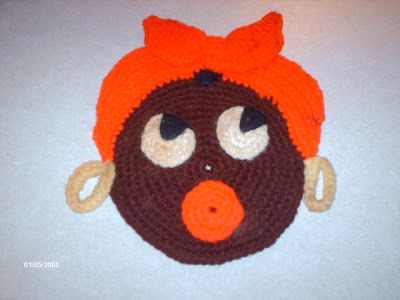 I dug this little gal out of the crocheted doily/hotpad/ladies scarves/gloves bin for 25¢. Seriously. That's even what it says on the sign in front of the bin! She's an oldie and I adore her. 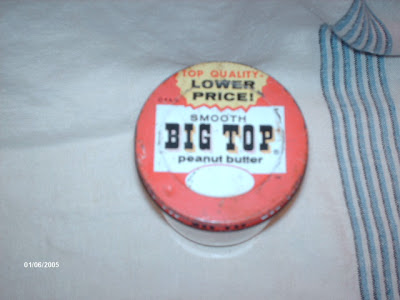 I went to one yard sale today and was about to leave empty handed when I spotted a metal toolbox full of screws, washers and old nails and stuff. There was an old jar upside down in it so I picked it up to look at it. It was a Big Top Peanut Butter jar. I've never heard of Big Top Peanut Butter, but I knew it was an old jar. I asked if I could buy just the jar and they said "Yes" then I explained that I really only wanted the jar, so they dumped out the contents and sold me the jar for 25¢. I am such a sucker for old advertising and especially old boxes and jars that should have been trashed years ago. I have bought most of my old jars and some old tins by finding them in the tool section full of nails. 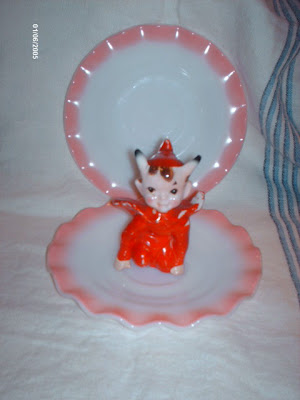 These two pretty ruffled edge saucers came from the warehouse sale for 5¢ each. I don't normally buy dishes, let alone cup saucers sans the cups, but did you look at them? They are freaking adorable. Pink and white with ruffles. Helloooo? Does it get any better than that? And for only five cents????? The little devil was 10¢ and is marked 1955 on the bottom. He was just too cute to leave there! 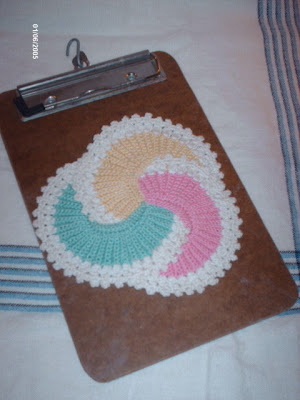 This clipboard is a small one meant for a book of receipts or an order pad. I've been trying to resist the urge to make an altered clipboard, but when I spotted this one for 10¢, I had to grab it for another (yes, another) one-of-these-days projects. There were ten of them in a basket for 10¢ each, but upon closer inspection, something had chewed the corners off of all but one of them, so I left them there. Eeeeew. I've also sworn off any doiley's as I have a ton of them and don't use any of them. But, this one was special, don't you agree? How on earth did anyone make that thing? And why would anyone sell it for 10¢? 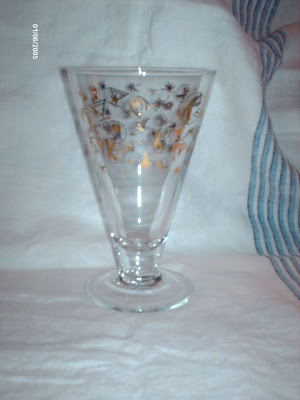 This Atomic glass was 5¢ and I bought it for price of it and the oddity of it. This is a crummy photo, but I am hoping someone might have a clue about what or where this glass is from and why it looks like it does! It has martini glasses, slices of cake, shooting stars and gold K's all over it. Any ideas? 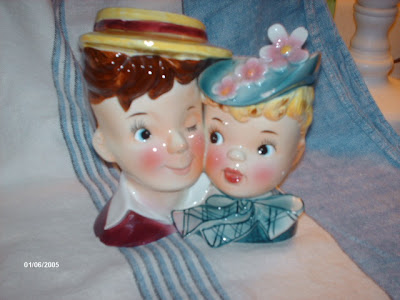 This is the first thing I found at the warehouse sale. A head vase! Yikes! And it is a cutie-patootie! The boy and the girl each have their separate vase sections so you can put two flowers or two plants in it. It is adorable. I hesitated about even asking how much since head vases are so hard to find and so expensive when you do find them. But, I bit the bullet and asked and the angels sang and a halo appeared over the ladies head when she said, "A quarter." I need to sell it. But, it is so cute! 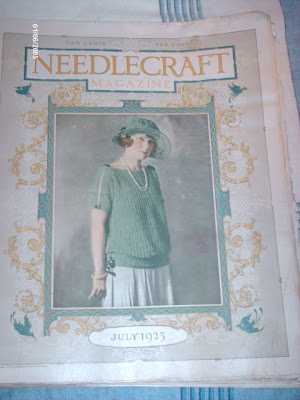 I bought a stack of ten of these old Needlework Magazines from 19232-1924. I thought they might be good ebay fodder, but when I got them home and started looking at them, I spotted wonderful fantastic old advertisements on the inside of each cover and on the back cover of each one of them. 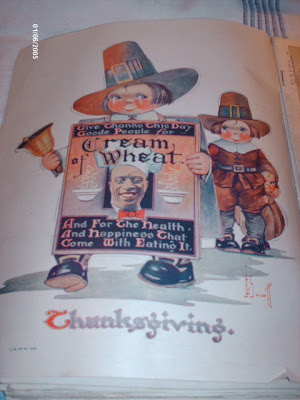 I love old Cream of Wheat Ads. They are hard to find. I've always wanted to find one. And tonight, I have ten of them! All different. I thought this one as unique because it is specifically for Thanksgiving. 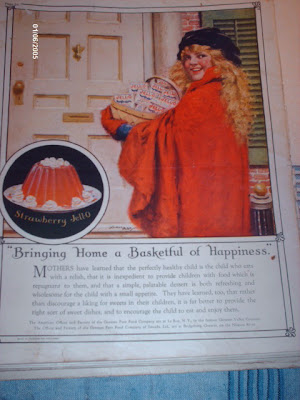 There are also some neat old Jell-O ads on the backs of some of the magazines. I love reading the tiny ads in the back of old ladies magazines. I found one for freckle cream that insists it can make you freckles disappear in ten days. Forever! And, a set of 101 dishes delivered to your doorstep for....$1.09. Ah, the good old days.

~~~~~~~~~~~~~~~~
Has anyone else been suckered in by the new giant cupcake pan that Wilton is selling? From the day I saw it I knew I had to have one. I found it online and then found a code for a percentage off, free shipping and a free giant tote bag to boot. It was on back order for three months. But yesterday my beloved UPS man delivered it.

So, of course, today The Bean and I made this: 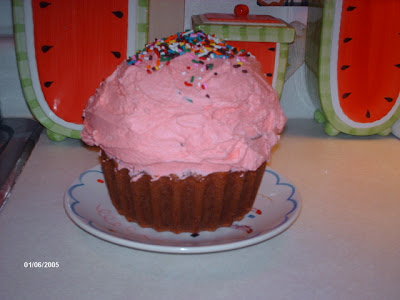 It's on a saucer so you can hopefully tell how big it is. It takes an entire cake mix, so it is a good sized cake. I think it will be fun to make the birthday person a big cupcake and regular sized ones for the party revelers. Icing it was a little tricky, but I did it with an offset spatula and not a decorating bag. I think a decorating bag would be much easier. As I was whipping up the icing, the mixer made a terrible racket and one of the beaters stopped spinning. I killed my mixer! Oh well, it was a wedding present and my 17th anniversary is in a week, so I suppose it lived a good long life. Good-bye Mr. Mixer. You done good.
Hellooooo Kitchen-Aid!
Posted by Shara at 7:03 PM