I hate the heat. Summer is not my friend. Give me air conditioning, dark rooms and a fan or two and I am a happy camper. (Not that I would go camping - but you get my drift.) But, this summer has been icky, wet, damp and down right yucky. It rains buckets several times a day even when the sun is trying to shine. Sometimes it gets hot afterwards, but for the most part, it has been geting cool in the evenings. That part I would enjoy, if it was dry enough to go outside.

This afternoon it rained. It poured. It rained cats and dogs. You couldn't see across the street. Cars could barely drive. It was terrible. I was lucky enough to be home and inside. (Well, lucky if laying on the couch clutching a coffee can with a nasty case of the stomach bug is lucky).

Once it stopped raining we went outside to have a look around at what is normally our front yard.
You're only a kid once, so we let DS have a swim in the ditch. Before long, the rest of the neighbor kids came out to play too.
There is rain in the forecast every day for the next week. Eh gads.

Here are my most recent finds. I say my latest finds because they are just that - found items. In my own home. I am on a cleaning binge, gathering for a yard sale and donating the rest. But, every once in awhile amist the "pile" that is my ebay room - I find a treasure and it makes all the hard work totally worth it. So far I have found, two Matte White Pottery pieces for my collection, a fantatic old Santa, four old blown glass candles, a heavy old Stork planter, a sweet pink Dakin Mouse, a fun old stuffed poodle, a stuffed dog with a rubber face and a fastastic fabric covered dollhouse couch that I swear I have never laid eyes on before now. Gremlins? (Outrageous, yes, Mumsie?) 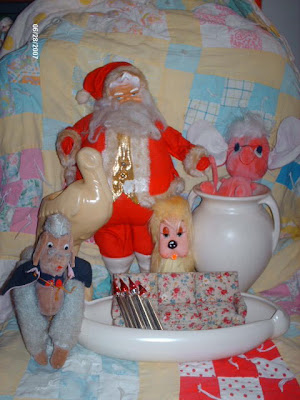 I'm halfway throgh the pile so I'm sure I'll find more treasures down the line.

Tuesday, July 3rd is my Mom and Step Dad's 15th Anniversary. It's funny that I've been married a year longer than my own Mother! Happy Anniversary!

Just as news on my friends the Harp's continues to improve after their accident, I heard of a death of one of our best teachers. She was killed in a car wreck this weekend in nearly an identical sort of wreck as the Harp's accident. She was only 29 years old, and even sadder, she was 8 1/2 months pregnant with a baby girl. Her husband is in very critical condition as well. She was the Drama teacher at the high school and everyone knew her. Her husband is the Band Director at the next small town over. only mention this as I think that as each one of you read it, it sends a thought to the family. In the six years we've been in this school system, we have lost three students and now a teacher. It is all so very sad.
Posted by Shara at 9:35 PM

Email ThisBlogThis!Share to TwitterShare to FacebookShare to Pinterest
Labels: ll