As it was pointed out to me by Ms. Oliveoyl, I have been AWOL. It seems that I have been really, really busy doing nothing blogworthy. Case in point, we have had plumbing issues in the kitchen. I don't have a dishwasher which is a SIN, in fact, I have never had a dishwasher in my entire life. So, when I have to wash dishes, the sink stops up and it won't drain and it ends up taking me hours to do the damn dishes. Which, in turn, makes me, slightly less than desireable to be around. Read - cranky. So, the Roto Rooter guy is out there snaking the drain as I write this post. (On a side note - Mr. Rooter is Fine.)

I did got to several sales and the thrift last weekend. Now, a few days later, I don't even remember what I bought. I tend to do that - get all wound up about my finds, then a day or so later, they seem most unremarkeable. I need to remember that when I am shopping and not just buy, buy, buy. The last sale of the day had a box at the end of the driveway with a sign on it that read "EVERYTHING IS FREE". I assummed that meant the things in the box was free, but EVERYTHING was free. Luckily, there wasn't much that interested me. I did get about 60 brand new hardcover books that I passed on to my Mom and Step-Dad. They are readers in the truest sense of the word. There were two shoes that had been decorated sitting on a table. I mean, these things were frug-ly. I would not have spent good money for them, but since they were free, DS grabbed them. See for yourself: 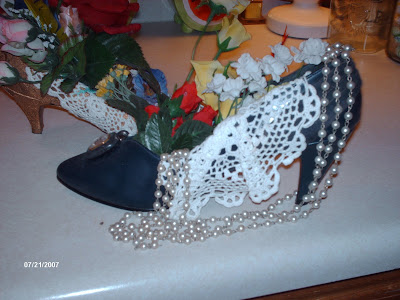 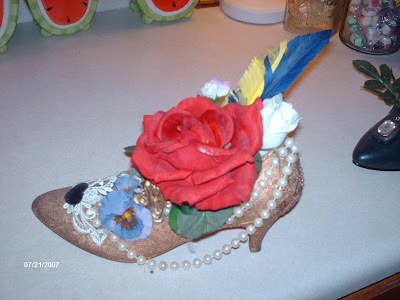 What were they thinking????

On Monday the mail lady delivered a most delightful box of goodies. I didn't recognize the address at all and was surprised to find a box of goodies and an Anniversary card from one of my readers and fellow YSQ memeber, Sveltestuff. She said it wasn't right that I had to host a giveaway when it was my 300th post Anniversary. So sweet! 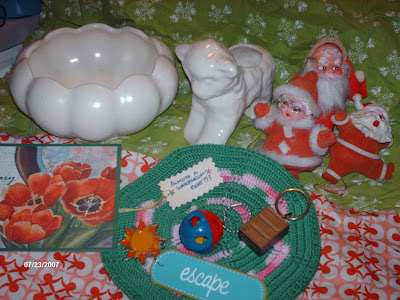 She sent metwo pieces of matte white pottery for my ever-growing collection, a pink and green crocheted potholder that she said was "almost a watermelon" and three fun little vintage Santas. She also sent DS a bundle of keychains for his collection and a bookmark. He was very excited to get goodies and I thank her for including him.

We're off to Chuck E. Cheese after the Roto Rooter guy leaves. I have been saving coupons off the back of the CEC String Chees packages. We have 108 tokens to spend. The boys will play the arcade games and I will bowl and maybe, just maybe, sneak off to the thrift that happens to be in the same parking lot. Hmmm....