How I Use My Junk

I am always hauling junk home. Sometimes I know what I will do with it immediately, other times, I have to think on it awhile. Often times, I get an outstanding idea for my junk, but I am usually in the shower since that is the only time I am alone and can think clearly. So, it is not unusual to find me messing with my junk late at night after my shower. DH and DS are used to it. They know I am a little different! Well, a lot different! 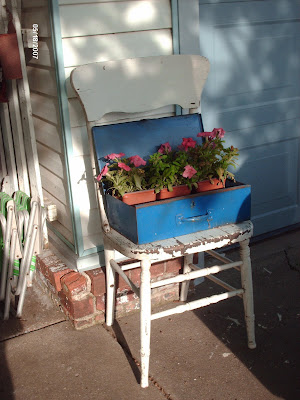 You may remmebr the old white chippy chair I found in the trash heaps during Spring Clean-Up. It sits between the porch and the garage door. I bought the cobalt blue toolbox for $2.00 at a Boy Scout Fundraising Sale. I have since planted the Petunias in in rather than just sitting them in it. 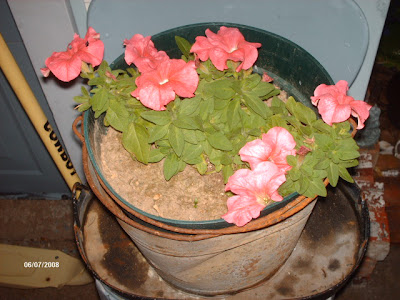 I rescued this old bucket out of the trash heap behind DH's Grandmother's house. Remember I said he lived up on Hillbilly Mountain? Well, they have no trash service, so they just hurl their cast-offs in the "hollar" behind the house. Actually, they have trash service now, buy for years and years, they did not. The first time I witnessed the trash pile, I was near the top and spotted metal coffee cans, green bean cans, milk jugs and the likes. Trash. Then we went through the woods and came around to the bottom of the trash heap. Oh, my, the rusty treasures I found. DH was embarrassed that the new wife was rummaging in his Granny's Garbage. The first thing I pulled out (It was very cold outside, so no snakes) was a tiny rusty tricycle. It was very old and not like one you would find nowadays. I snuck it in the back of the truck and we brought it home. About a week later DH's Mother came over and saw it. "That looks just like my tricycle when I was a girl." Uh, yea, it pretty much is your tricyle. But, I didn't tell her that! It's out back under a tree, but I didn't think to take a photo of it. I've brought home a ton of old bottles and a couple of lard (eeew) cans, too. The bucket is an old well bucket that was tied to her well for years. The bucket is sitting on one of those old kitchen chair / step ladder combos. I bought that at a yard sale right out from under the guy having the sale. "Is that stool for sale?" I asked. "Well, I didn't think anyone would want this old thing," he said, "Dollar okay?" Snap! 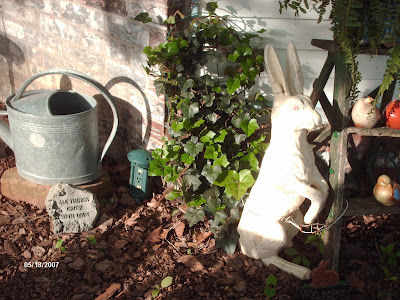 I found this watering can at the Salvation Army for $5.00. I intended to sell it at the Flea Market, but then I found out how much it was worth, so I decided to keep it. Sometimes it's nice to make some money, but sometimes, it's nice to have something valuable all to yourself. We use it everyday to water the plants. It is sitting on a big piece of stone that we took from my Grandmother's old house before she sold it. It had been in her backyard for years and years. That was nearly 300 miles from here. You see Mr. Bunny there too - remember his kidanpping last year? For anyone new, I returned home from vacation to discover Mr. Bunny was gone. Being the grown up I am - I made huge KIDNAPPED signs and placed them in my yard and on the mailbox. The next day, Mr. Bunny was returned, albeit, missing a foot and looking a bit tired, but nonetheless, he was mine again. He is now wired to the ladder and should stay safe. Mr. Bunny was $2.00 at a fundraising sale. I found him very late in the day, hiding under a table. I say he was waiting for me to find him. 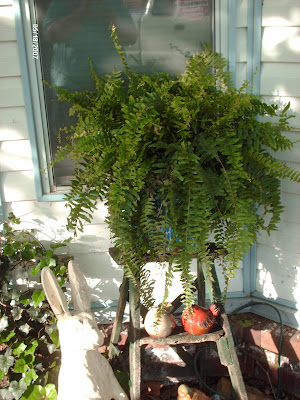 This is a very old rickety ladder that I bought for $1.00 at a sale. The old man had made it himself and advised me not to climb on it because it was old and rickety. Well, I hadn't planned on re-roofing the house on it! I just thought it was some fabulous junk! It's green and chippy and all worn. The fern is in a old blue and white swirled enamel pot that I picked up for $1.00. The bottom is completely rusted out, but you can't tell. 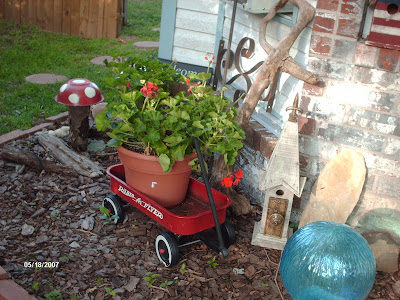 Here you see DS's old wagon with a huge pot of geraniums in it. I got the geraniums after Mother's Day on the 75% off rack. A little sun and a little water and they are HUGE! I made the mushrooms out of tree stumps and metal mixing bowls. The Electric Company was out trimming trees and I was all a'twitter following them looking for mushroom sized stumps. There is a set of three, although I think only one is showing. I found the old iron scrollwork at a sale for 50¢. When you stand it on end, it makes a double "S". My last initials were an "S.R." when I bought it, but now my initails are "S.S." Weird, huh? That piece of driftwood was found by DS on a trip to Grand Lake. It has a perfect loop in it. The flat white stone was plucked out of the lake too. We don't shop for souvenirs, we hunt for rocks, logs, sticks, etc. The bricks around the perimeter of all that were free. I went around to a new subdivision when they were building it and scrounged bricks out of the trash piles. (In fact, I brought them home in that wagon!) Some have nicks and chips on them, but do I look like a person that likes new looking stuff anyway? 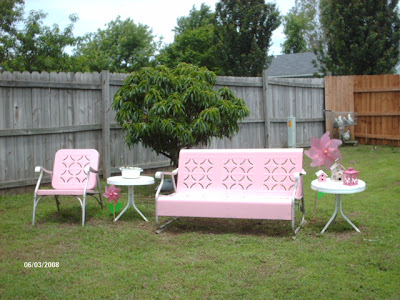 My Mom mentioned that I never posted a photo of the glider and chair I bought this Spring. Here it is, much to DH's chagrin, newly painted in a lovely shade of pink. That is a dwarf Peach Tree in the back, so not, it is not a giant glider!

Kudos to Heidi for identifying my Pyrex lid. She nailed it. Almost too good. Heidi are you Pyrex obsessed????? ;o)
Posted by Shara at 11:31 AM