I was coming home about 1:30 yesterday when I saw flashing lights around the bend at our newwest stoplight (we have two now). I assumed it was a minor fender bender as people aren't used to the new light yet. I turned on a side street and backroaded around to the other side of the highway and got home that way. Nearly an hour later I left to pick up DS from school and I could still see the flashing lights and traffic was really starting to stack up. I waited for DS and got him picked up. Now it was nearly 3:30 so I assummed that it would be all over buy then. But, as we headed out on the highway, traffic was terrible. I drove down the center lane to get to my turn off and we could still see the flashing lights up ahead. We turned on our street and circled through the housing addition and came out at the new light. I turned into the parking lot of our bank and we could see an entire semi laying across three lanes of traffic. We pulled in and parked and were really within feet of the whole thing. It was a sight! 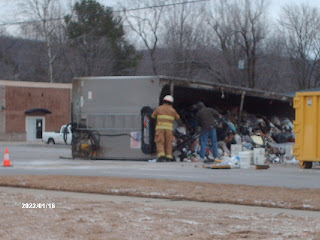 The semi was one of those open top ones with a tarp over it. It was chock full to the top of garbage. Bags and bags of trash. And it had all but exploded all over the highway blocking all five lanes. They had brought in huge roll off dumpsters and backhoes to clean it up. Plus there were lots of people with shovels trying to clean up the muck. Really, it wasn't that mucky - it seemed to be all in trash bags and it looked like it had come from dumpsters - we saw towels and clothes going in there too. We were really close! 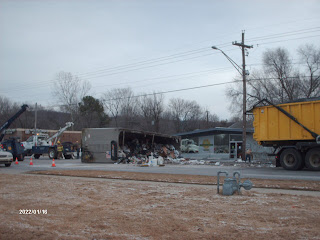 They brought in two big wreckers and tried to turn it upright, but it didn't work. They would get the trailer about a third of the way upright and it would start to screech and skid towards the fireman. They laid it back down and strapped the firehose around it then used the firehose as leverage to sit it upright. All the onlookers (we weren't the only people watching!) applauded and the wrecker driver waved his hat at us. Small town entertainment.

They had to reroute all the east bound traffic back through my housing adition and down this very skinny road that leads to the next highway over. My firends live on that road and before long the husband came to see what was going to since he had never seen so much traffic, let alone, semi's, buses and the like going down his very narrow road. 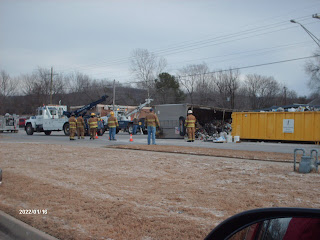 I read in the paper this morning that the driver was trying to change lanes to give clearance for an ambulance and it over corrected and jack-knived. The driver went to the hospital for minor injuries. It is a miraclet hat he wasn't hurt worse. It is even more of a miracle that there wasn't a car trapped under the trailer or some other worse thing. Traffic was stopped for nearly five hours while they cleaned it upa dn got the trailer and dumpsters moved out. The west bound traffic basically just had to sit there except for a few times they had one lane clear and could let a few cars through. I imagine they were blocked for miles and miles and even back onto the Interstate.

It was like watching, "World's Most Amazing Videos" right out my car windsheld! DS thought it was "super cool."
Posted by Shara at 10:34 AM