Four Months - How is that possible!

*Tap *tap?  Is anyone still out there?  I shocked myself when I looked and saw that I haven't posted for FOUR MONTHS.  I never thought I would see that day!  Before I actually blog, I want to thank Lynn for sending me postcards from around the world.  She's a long time blog reader and friend and has remembered me on her vacations for several years.  I really appreciate you Lynn! 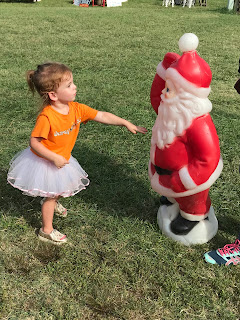 So, I have finished up TWO Junk Ranch shows since I last posted.  The October show was a great show as always - still hot though, but now nearly as bad as June.  I sold a lot, saw old friends and make new friends.  I've done is so many times now, it's pretty much an easy set up and tear down. 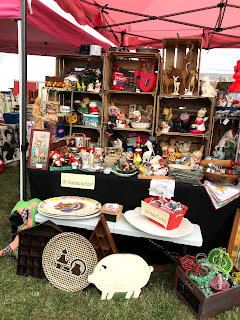 My usual set up with new/old junk.

Local news story about the Junk Ranch.  They shot it in my booth and that's pretty much all my stuff in the story.  Excuse my narrative during it.  ;) 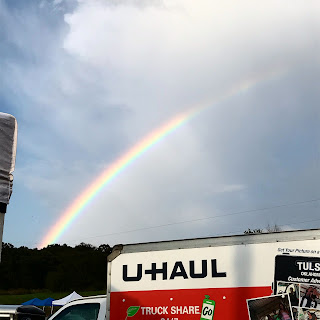 Near the end of the day, a big popup rain shower hit.  It made a mess of a few things as we threw them under the tent.  But, we were rewarded with a huge rainbow right overheard.

That was October 5th.  On December 6th (this past weekend) we had the Holly Jolly Junk Ranch.  You might remember last year that Day One was sunny, warm and full of customers. 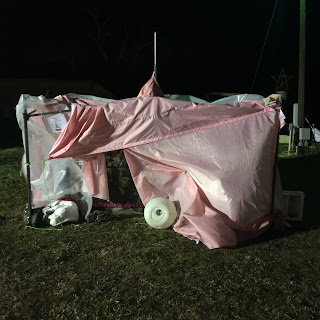 But, that night straight line winds and horrific rain moved in, which resulted in decimation on the field.  I lost 5-60% of my inventory as well as my brand new $400 canopy.

This year I am happy to say that the show and the weather were pure perfection.  The people lined up at the gates in the mornings and my booth was packed for the first hour and steady all day long.  I sold vintage and things that I had made.  Lots of happy customers and a very happy ME! 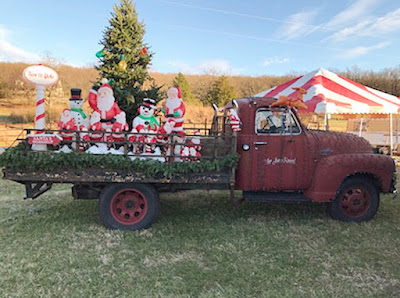 There is an old truck on the field that is a perfect photo op during the show.  This year, I took my personal blowmold collection out and placed them in the truck.  I also have a life size store display Santa that I took and put in the back so it looked like a parade float. 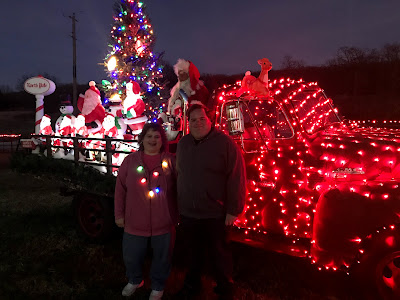 It was all lit up at night as looked super cute. 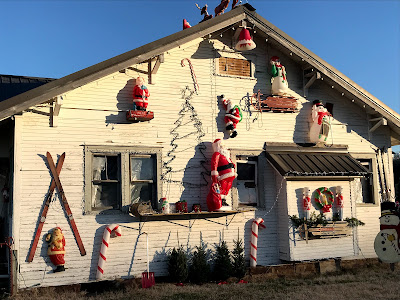 The side of the old farmhouse was decorated too.  These aren't my blowmolds - but I wish they were! Love that huge Santa!

Amy and Julie do so many fun and extra things to make it a fun show.  Santa was set up for photos and that was pretty much expected at a Christmas show. 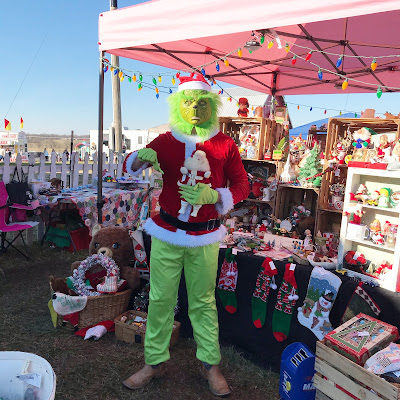 But the Grinch roamed around and delighted/scared kids all weekend too.  I'm not sure who was in that outfit, but he did an outstanding job as the Grinch!  Down with Santa???? 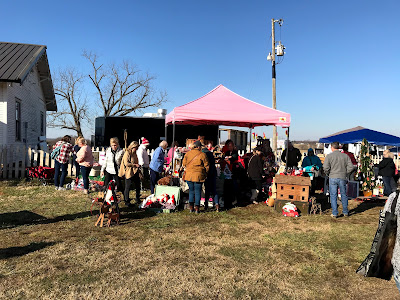 My booth is first in the door and always busy.  This was just as the gates opened. 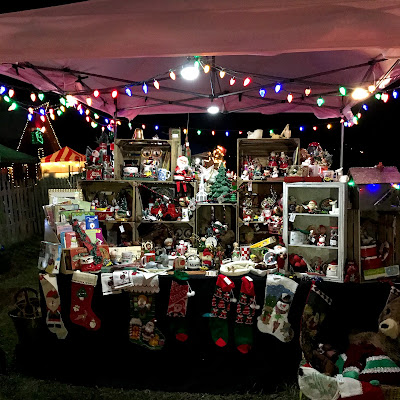 My junk looked good at night!  Cheap magnetic lights from Amazon did the job perfectly with some Christmas lights added in for cheer.

It was a great weekend.  The Bean helped me in every way with every single detail.  It's my business, but I swear he could set it up just like I do now.  He pays attention.  Normally, the husband helps load in and out, but this time he said it was just too much and didn't want to be involved.  Now, I don't want to husband bash or talk smack.  But, WHAT THE HELL?  All he does is set things in the truck and out of the truck so it speeds it up a little.  I think he thinks this is "mine" so I need to do it myself.  But, I also think he forgets who organizes his taxes, writes his checks to his workers, washes his uniforms and makes plans around HIS schedule for "his" job.  I also think he needs to be reminded about that.  And that is the end of that.

Thanks for stopping by and continuing to stop by to see if I ever post anymore.  I'll try to get better about it. I know blogs are sort of a dying thing.  But, I do so love to write and talk about stuff even if my life seems quiet and boring over here.  I'm always on Instagram @sharamonkeybox with photos and tales every day.  Come over is you aren't already!
Posted by Shara at 4:13 PM