Junking For Junk Food and MORE

The Week after The Junk Ranch, I wasn't feeling my junk ju-ju at all.  I was junked out.  But you know what I needed?  A cake.  Yep.  A big old cake with frosting.  I didn't really need it, but I wanted it.  I never eat much during the Junk Ranch itself and I was depleted of fluids and had low blood sugar.  So, my brain was saying, "Cake.  Cake.  Cake."

Now, I had heard a rumor that the Salvation Army had starting getting the day old bakery items from Sam's Club and they were FREE.  So, I decided that maybe I would see if I had any junking ju-ju and maybe, just maybe there might be a little something for my sweet tooth there.  And, maybe something in the junk department too.

When we walked in, I spotted the shelving full of baked goods, and The Bean spotted a huge stuffed Tiger sitting not to far from it.  He went to look at the Tiger while I went to the "Antiques" area  for a look.  You have to make a purchase to get a free bakery item and I had no intention of buying a giant stuffed Tiger!!!  I didn't find anything, so I went to look at the stuffed Tiger (with my eyes gled towards the CAKE area)  Then I got closer to the Tiger.  He was big.  Like, life sized. HUGE. 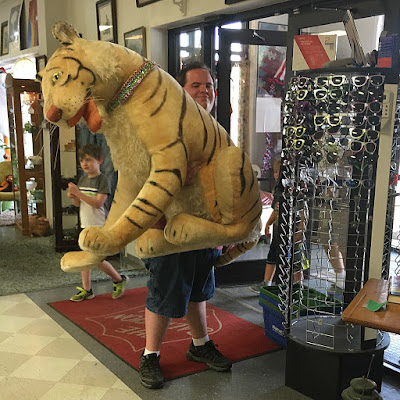 As soon as I got close to it, I could tell it was old. There was a tiny tear by his ear and I could see it was stuffed with excelsior.  I realized it was Mohair.  And he had huge glass eyes. Then it hit me, "I think this is a STEIFF!"  I told The Bean that I thought this was really something.  He said, "It's only $4.00"  SOLD!  (There was an old Christmas bow around his neck, which made him look tacky.  But, luckily, that came right off.) 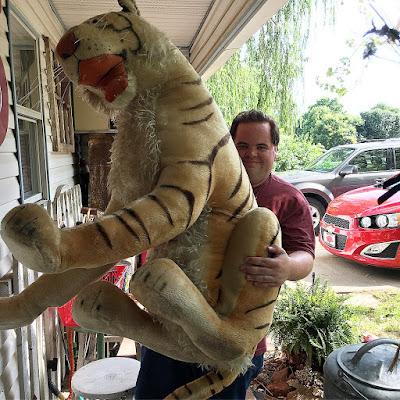 It barely fit in the car!! Luckily, I had just left the booth and unloaded a bunch of junk, or I never could have squeezed him in there.  He weighs about 65-80 pounds, I think.  He is so heavy and just beautifully made. 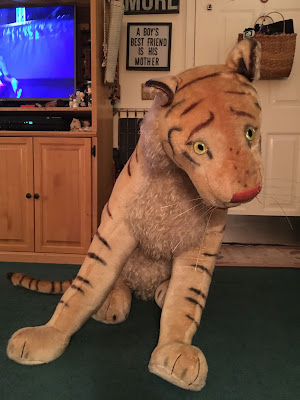 A lot of googling and research lead me to this:  He is a Studio Steiff, which means he was hand crafted by a team of people over the course of a few days to a few weeks.  Steiff made three different sizes of these Studio Steiff Tigers and he is the largest of the three.  He was most likely for a huge store - like a Macy's Steiff Christmas display.  His eyes glow in the dark, which is a little jarring when you forget he is sitting in the garage.  Ahem. 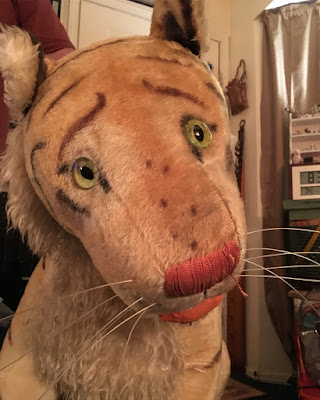 He's fantastic - don't you think?  Have you ever seen such a HUGE Steiff???


I've seen a value for him ranging from $350-$1800.  I really like that $1800 amount!  :D  He has that tiny tear by his ear that I mentioned and his mouth has been relined with a reddish corduroy. He is also missing four large carved wooden teeth.  I am assuming those were removed for safety.  Someone said he was faded, but his color is consistent, on his stomach and in the crevices of his legs where light would never hit.  So, I'm not sure it is actually faded.

I shared him on a Facebook of thrifters and one of the members shared it on a Steiff page.  I got a lot of response to purchase him - but MAN - shipping would be a beast. (HA! GET IT!)  It would require a trip to the UPS store to be boxed up, then another trip to the BUS STATION to send him on a Greyhound Bus.  Apparently, shipping through Greyhound is completely normal  - but it is all new to me and it sort of freaks me out to think of buying a stuffed tiger a bus ticket?!?!?  Who am I?  Calvin - sending Hobbs off on vacation???  I'd really prefer to sell him locally or meet someone an hour or so away.  More money to me and not to Greyhound.

I may take him to the Fall Junk Ranch just as a lure into the booth.  But, he's about as big AS my booth.  He'd be a great photo op too.  For now, he's in the garage taking up the space of a Smart Car.  Thinking, thinking, thinking.  I'll keep you posted!