That Other Show I Talked About

I did a Vintage Holiday Market this past weekend.  I have wanted to do a Christmas market for a few years, but hadn't found one that was affordable or close enough that I could do it.  Then I found this one and it was only 10 minutes from my house.  That was good.  The bad part was that it is sort of a competitor to my beloved Junk Ranch.  But, since I had already done the Junk Ranch and there wouldn't be another one until June, I decided that I would give it a try.  Honestly, I almost made myself sick over deciding to do it or not.  I am fiercely loyal to the Junk Ranch and all of these newer copycat pop up shows keep coming along and copying everything TJR does.  I get so riled up you would think that I was an owner!  I had pulled out the best of the best for The Junk Ranch.  I truly only took my leftovers and some things that I had depleted like Christmas flash cards and a few other handmade things.


The show was inside.  That was one perk.  Level floors where I could build a display anyway I wanted and it wouldn't blow over or get dirty.  The downside was going to be walking each crate, board and table in and that would take a good amount of time  We got there early on Thursday to carry everything in and to set up.  That's when I discovered the biggest perk.....I could DRIVE INSIDE the BUILDING!  I drove in, right to my spot and we unloaded in less than ten minutes. So fast!  People that arrived after a lot of us had set up couldn't do that, so I was glad we had gotten there early enough to drive in.  I had all my diagrams drawn out because I am a total worrywart when it comes to shows and setting up my merchandise for peak eye appeal and to get LOTS of stuff in my section. 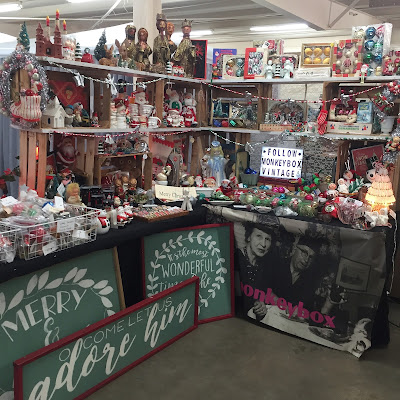 Because I knew exactly how I wanted it set up, I was unloaded and completely done in about two hours.  Not having to deal with the canopy, walls, weights, etc. was a real time saver.  I was super happy with how it turned out after I was done. 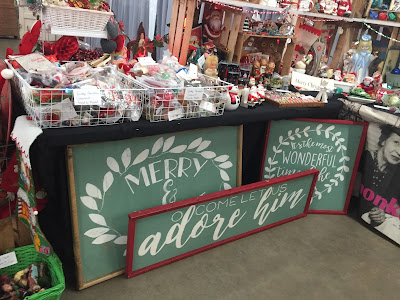 Lara brought in those three signs to add some big pieces to my area.  Most of what I had was super small this time.  I had to get every single thing there in one load and back home in one load.  I did it!  Well, that's not entirely true.  I gave eight crates away to a lady across from me that had admired their usefulness.  I have about 100 of them in my backyard (My Dad gets them for free and I sell them for him), so I was happy to share them and not have to haul them back home!

Let's have a look around. 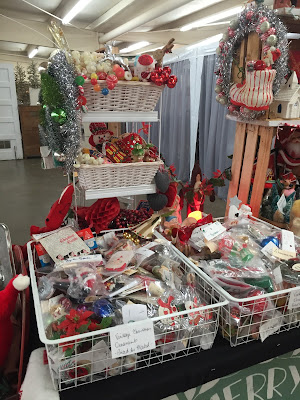 Big wire baskets full of vintage Christmas ornaments and crafty bits.  I love using that three tiered wire basket for display.  I honestly don't sell a lot out of it, but it holds the extra things that I am unsure how to display like beaded and candy garland and honeycomb.  I think I sold about ten things out of those wire baskets. 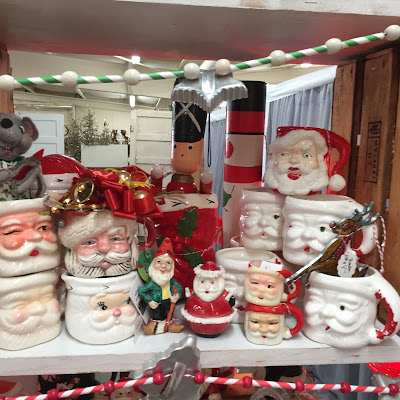 Each crate or cubby had a theme or a vignette.  Santa mugs here. Not a one sold. 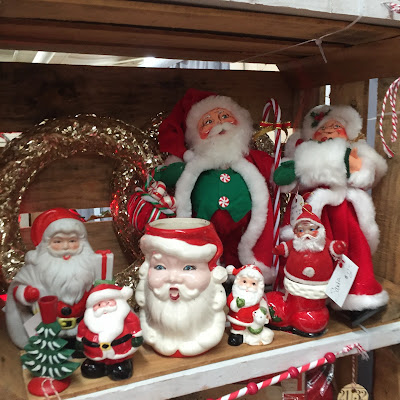 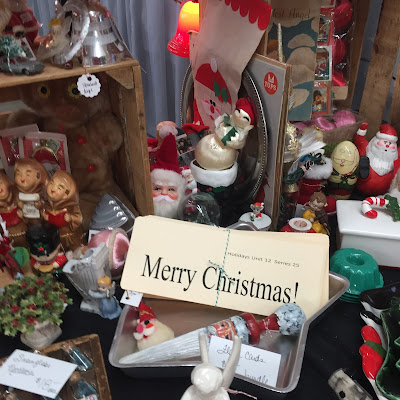 I like to fill up a space, then fill it up some more.  :D  I completely sold out of those Christmas flashcards at the Junk Ranch.  I sold 25 packs.  So, I made 25 more.  I sold one pack and that went to a lady that had come to the Junk Ranch after I had sold out.  Most people picked them up, thumbed through them and made a face - like what are these.  What would you do with these?  It was such a different crowd.  The monk choir in the back sold. And that Santa head with the big beard. 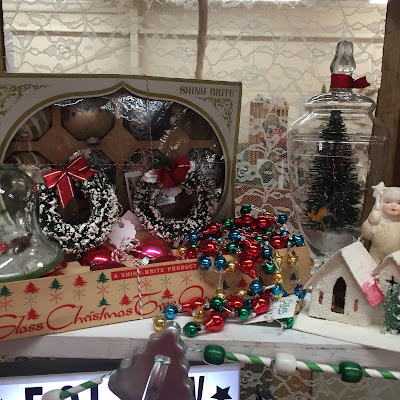 I had nearly sold of of vintage ornaments, so I worked really hard to find a bunch of new ones for this show.  Not a single box sold.  (Are you starting to sense a theme here?) 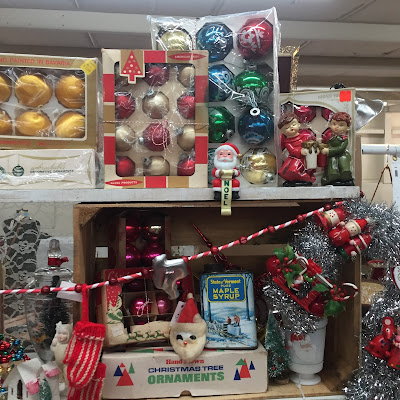 I sold out of cookie cutter garlands at the Junk Ranch, so of course I made more.  They did not sell.  One customer said they were a genius idea.  Then followed that up by saying she was going to have her Pre-K class make some.  So, apparently, my crafting ability is on a four year old level.  Nothing in this photo sold. 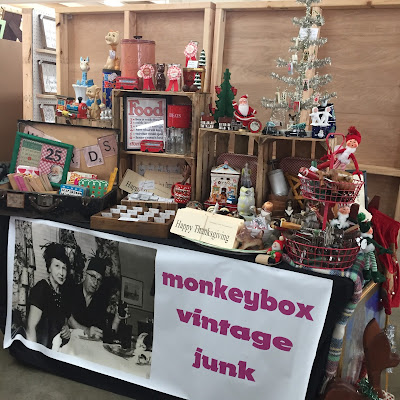 This was on the other side.  I used both of my banners which was probably too much, but I usually can't, so I did.  I sold a few red and green handled kitchen utensils.  There is an odd nutcracker in there and I swear to you, every single person that walked by picked it up and looked at it.  We made bets when someone would come by - will they pick up the nutcracker?  YES!  Take a shot.  Ha. 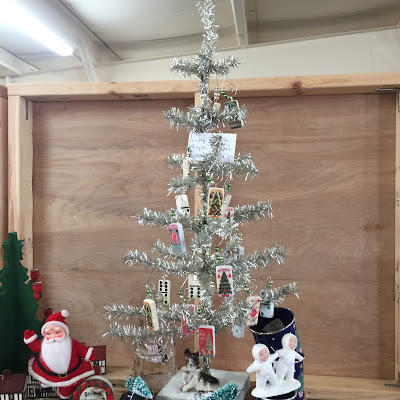 I turned my domino pendants into ornaments complete with mercury glass beads. A couple people looked at them, commented on the fact that they are dominoes and went on to the next booth.  I head, "We could make those" more than a few times.  UGH, UGH, UGH.  Don't say that EVER!  Think it, make a note of it, write it down.  But DO NOT EVER SAY IT OUT LOUD.  Sure, they aren't rocket science.  But they are MY idea.  I scanned old packages that I found out in the wild,  I figured out the program on my computer to make them shrink to fit.  I found the old dominoes.  I researched and found just the right adhesive,  Spoiler alert - it isn't Elmer's glue.  I learned how to glaze them so there is a raised surface, how to carve the edges and on and on.  They can try to make them, but they won't be like mine. 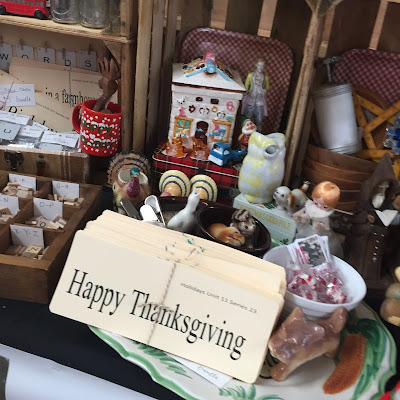 Thanksgiving flashcards.  Guess how many I sold!  If you guessed, "Not a damn one" *DING*DING* you win! 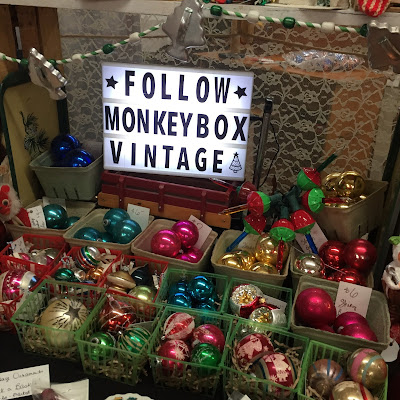 Beautiful vintage ornaments gathered in old berry boxes.  Sold 43 at the Junk Ranch.  But, this weekend I sold......say it with me...."Not a damn one!"

My only new addition to this show were snow globe necklaces. 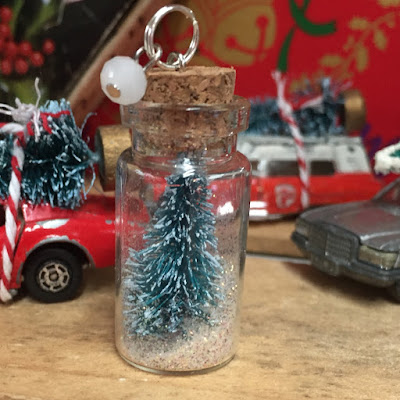 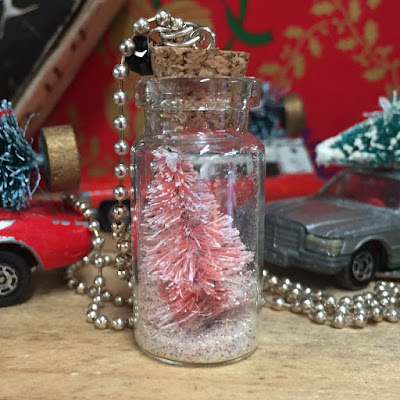 And a few of the sweetest little PINK trees.

How many did I sell?

NOT A DAMN ONE.

I did put them on Instagram and sold a few.

The show was Friday from 12-9 which was entirely TOO late.  Saturday was 10-7 which made us load in the pitch freaking dark.  There was a Razorback football game a few miles up the road and everyone had to drive by the show on the way.  I thought that would be GREAT for business.  But, they came to waste a little time before the game.  Not to shop.  They had to save their money for their $25 Popcorn and Coke at the game.  Also, most of them just did not "get" the vintage thing even though the word VINTAGE was clearly part of the show's name.  I got a few "yard sale stink faces" at my stuff.  I did have a good amount of people that came in all smiles and LOVED it all. Memories, mentions of Mom and Grandma - the stuff that makes me love doing what I do.  They got it, they loved it.  They bought something.  That was good.

Rent was $150 and I sold about $200.  Not worth the time by far.  Oh the things I could have done with those two days instead of sitting there.  On Saturday, I got so bored that I listed things on ebay, Etsy and Instagram.  Nearly everyone around me was doing the same thing.  I brought a stack of magazines, read them and passed them on.  I saw those magazines made the rounds to ALL the booths.  "Would you like a magazine?  "OH YES! THANK GOD."  Sheer boredom.

So, lesson learned.  Stick with what I love and what I know is the BEST SHOW EVER - my JUNK RANCH.  (Love you Amy.)  I am done with shows so I am a free woman now.  Bring on the turkeys, bring on the Santa's!  You would think I would be sick to death of Christmas, but I am DYING to see my pretties. I have sold so much this year - I forget that I own the best stuff.  HOARDER and proud of it!