The Week in Junk: Christmas and Pricing

I'm still going back and forth to my Mom's helping with things, buying provisions, delivering prescriptions and the like.  My step father is feeling better, but he is still so very dizzy from one of his medications.  The doctor took him off of the medication but said it could be 36 days before he isn't dizzy anymore.  Isn't that crazy that he had his chest cracked open and had heart surgery and none of that bothers him, but the medication has him sitting in a chair unable to hardly move?  It's crazy, I tell you.  What was also crazy was when the Cardiologist told him that he better call the VA and make sure they were going to pay for that visit before she even would see him. I just do not understand the medical field and insurance.  (This is not a political thing.)

In the times between, I am trying to keep my head above water over here with my chores, trying to keep the booth stocked, trying to hunt down Junk Ranch inventory and yes, preparing for yet another Junk Ranch on October 6th.  That will be here before you know it.  ACK.  I am particularly unprepared this time, but it'll get done.  Even if it kills me.  And it very well might this time.

Friday I went to a few sales that I saw on Craiglist.  That isn't really like me - I usually just see what signs I see and don't travel too far to sales.  But, one in particular looked like lots of things I love and the prices looked very affordable.  The other sounded like a good Estate Sale that promised "lots to dig through".  I went to the affordable sale first because in the ad I saw a plaid metal picnic basket and I WANTED IT.  But, of course, I knew I would be late and miss it.  (And I did.)  When I got to the sale, my eyes were scanning the driveway for that tin when I heard, "Hi Shara". The sale was a fellow flea market booth friend from my old store.  She was cleaning out stock and it was cheap.  She said I thought of you when I put out that plaid picnic tin.  DAGNABIT.  I got a few things from her and headed on to the digger sale.

Along the way I spotted an ESTATE SALE sign that pointed into a bunch of new condos.  I decided to stop since it was right there.  It was a fancy condo full of fancy things and the prices were fancy as well.  I decided to duck into the garage where I can usually find something that I can afford.  That's when I spotted a giant cardboard box under a table with a glimpse of Christmas sticking through.  I barely looked in the box after I realized that the whole box was only $2.00.  Was it worth it? 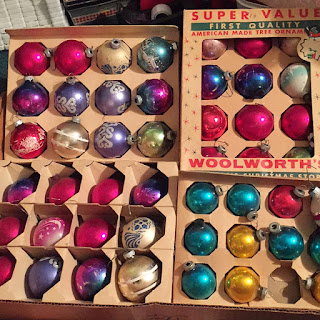 Uh, YES.  There were old sets of lights and some ornaments in there too.  But the ornaments were the best part FOR SURE.    That photo garnered over 400 likes on IG, so I guess lots of people love vintage Christmas.  (duh). 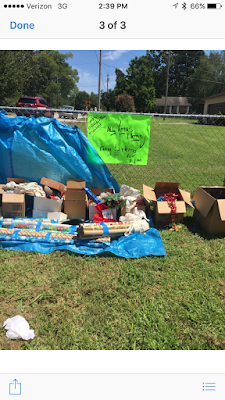 On to the Digger Sale which was an entire yard just covered in lines of boxes.  Lots of boxes.  SO many boxes.  I spotted this area off to the side: All Christmas 5/$1.00 so I went for a dig.  Sadly, it was all newer Dollar Store / Hobby Lobby and mediocre at best.  I did find a few glass and brass deer.  Deer always sell  - new or old.  I dug in all those boxes until I was a sweaty mess and bought very little.  Gosh, I hope my estate sale garners more money and has more interesting things than all of that....stuff.  The people having the sale were so very nice that I wanted to buy a lot.  But, it just wasn't there.  As I learned from "Backyard Bounty" (Netflix - have you watched it?) the sale was "Good from far and far from good".

Saturday I went a sale that had six older people sitting in the garage. They all greeted me and made small talk.  I spotted a shoe box full of older Christmas decorations - no glass ornaments, just wooden ones and a few homemade ones.  Nothing spectacular, but good for wreath making.  Then I spotted some older tablecloths being used on the tables and they said they were for sale for $1.00, so I helped the take them off the tables and put everything back.  I found an old tree skirt and an armful of Christmas things like a homemade tacky Santa with a good old paper mache face, a pair of ceramic HOMCO angels and a stuffed reindeer.  I went up to start sorting it all out so we could decided what to pay (nothing was marked,  Did I mention that?  That's important.) when the little old lady said, "$25.00 please."  Uh, what?  I had no more than about $10.00 worth of stuff in my pile.  I very politely said I would need to put some things back because I didn't even have $25.00 on me.  They were still very nice about it, but after I did pay for what I wanted, they discussed me as I walked away and I felt very, very small.  But, geez, I can't just pay crazy prices for stuff that isn't even worth that.  Onward and upward.

A couple of weeks ago I stopped by a thrift and it was wiped out since the college kids had just moved in that weekend.  There was surprisingly little to look at, so I spent some time digging where I don't normally like in the bags of old candles and the crafty floral area.  As I pawed through the bags of half melted candles, I spotted a turkey.  A GURLEY turkey.  Then another and another. Luckily the bags were color coded and were only 50¢ a bag, so For $3.00 I got seven Gurley turkeys. I can't find the photo and they are packed away now.  Sorry about that. 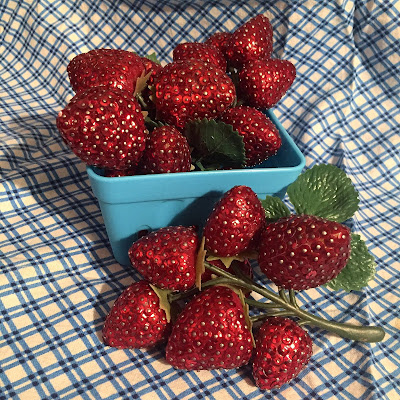 And then, among the silk flowers and bags of silk vegetables, I found all these glorious beaded strawberries.  FOR FIFTY CENTS!  I bought the berry crate later in the day and it was if it was meant to be.  Now I have to dig in the candles and flowers every week.  They are just beautiful.  I need to sell them.  But, well. 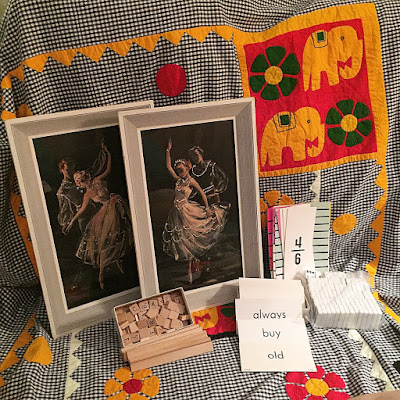 A few buys from just over the OK line.  The ballet photos are sweet and will go to the Junk Ranch. I'm always buying flashcards and Scrabble letters and dominoes for more necklaces I always SWEAR I am done making.  The elephant thing was in the baby quilts, but I think it might be a tablecloth.  Not sure - but it's handmade and it was $2.00, so I grabbed it. 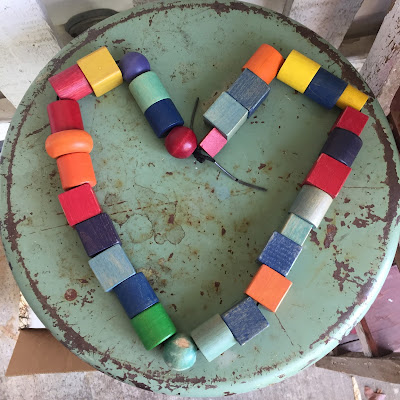 Love these old lacing beads that I found in a store that was literally about to cave in and was going out of business.  The lady at the store still had too good of a memory on what she paid for things and she said the word "ebay" repeatedly, so there weren't many deals there.  But, these lacing beads stole my heart.  And, they make a heart.  <3 nbsp="" p=""> 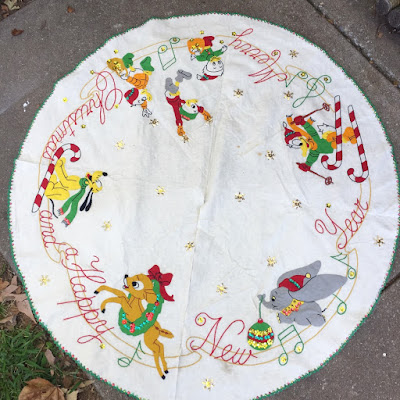 Here's the tree skirt I got at the $25 sale.  It was $1.00 and turns out to be my find of the day. Funny that they didn't put value on it.  Neither did I when I grabbed it.  The kit sells for $55, so I am hoping the finished item sells for well more than that.  Fingers crossed.

Here's hoping I will be back soon with some fun story.  Until then, I am off to the vet with a kitty that isn't quite himself today.  Fingers crossed on that.