I'm not really feeling the holiday this year. Not that the 4th is that big of a holiday for us, but we do usually go to 2-3 firework shows and a couple of parades.  The parades were moved to June 21st which was weird and we were busy that day.  We aren't lake people or boat people and since the Breadman is just that, a BREADman, he works around the clock to keep those dang hotdog and hamburger buns stocked for all the festivities that everyone else is having.  Not us, mind you.

His job is under a lot of changes and they are working him to death.  He has been on a route since about Thanksgiving (not sure if I ever mentioned he was back on a route).  He works about 85 hours a week.  Sometimes more.  His paychecks are good, but not when you average it out by the hours he works.  Of course, when you work 85 hours a week, seven days a week for months on end, that doesn't leave much time out for anything other than supper and a shower before he has to go to bed and start over again.  He is tired beyond tired and in a really, really awful mood. He talks to me about it (and by "talks to me about it", I mean he calls me and rambles on and on about his long day and how everything is going wrong and it is only 8:00 am and I just want a cup of coffee).  When he does come home, he doesn't talk, he just sits and stares.  He is short tempered and edgy.  I can't remember the last time he asked me anything about the house, my life or anything.  Yes, I KNOW he is tired, Yes, I KNOW he works too many hours and has a right to be grumpy.  But, I also know that I do not need to be the person that he lets his grumpiness out on.  It's making home life less than desirable right now.  Now, if that is all TMI for any of you, I do apologize.  I don't apologize for saying it or feeling it because it is my reality right now.  He really needs some time off, a lot of sleep and a break.

I need a trip to Hawaii.

Okay, enough with the bitching, right?

So, I threw out my 4th of July stuff after I was done with the Junk Ranch.  Most of my holiday stuff gets reduced each year.  But, I actually added a few things to the stash that didn't sell at TJR. 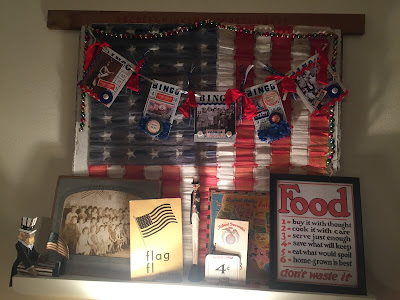 Such a dark dreary photo.  I've had that old paper flag of awhile intending to sell it.  It has condition issues which cause folks to curl up their noses.  So, I decided to just go ahead and USE it. 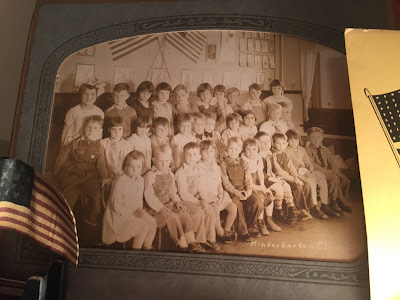 That's my Grandmother's Kindergarten photo.  Not sure of the exact age, but about 1931? 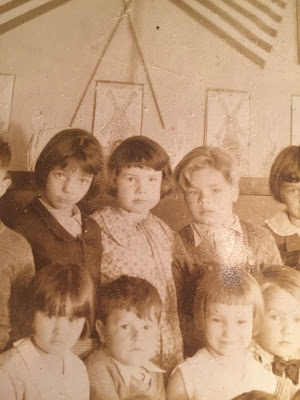 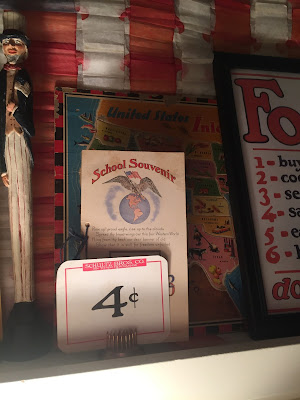 The school souvenir is from my Great Grandfather (the Superintendent) from his teacher.  I guess they did this every year back in the day.  A neat treasure to have found. 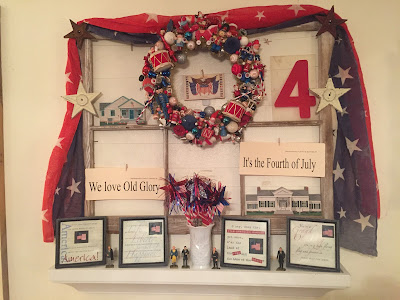 This display needed something else, so I threw up the Red, White, Blue and Soldiers, Too wreath I made.  There's some Santa's mixed in there, but WHO CARES.  It's SANTA!  That banner came off the Navy Ship when my Great Uncles came back from WWII.  My Grandmother, who was not nostalgic or ever shared family stories, had this banner, the Kindergarten photo and the school souvenir in her old shed.  Happy that I found it all and it has a good home now. 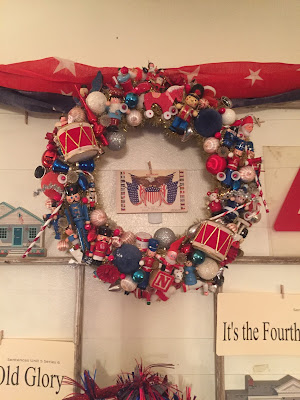 There's the wreath.  SANTA!  I shouldn't apologize for using it in my 4th stuff since it actually fits in there.  It normally hangs on the bathroom door!  All year long!  I'm afraid to stuff it in storage for fear it will get damaged. 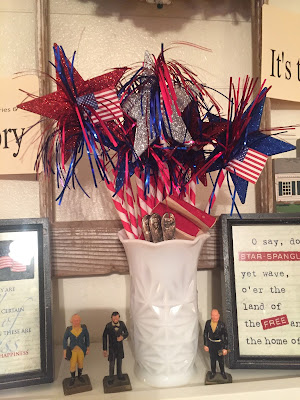 Little things are hard to display, so I just shoved them all in a milkglass vase and called it done. 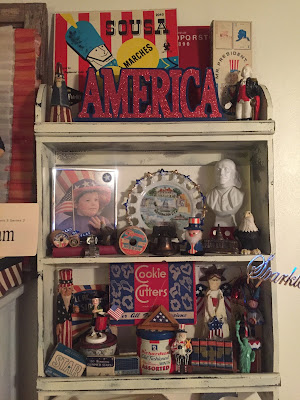 All the patriotic things and things I have deemed "patrioitic" based on their color, or brand name. 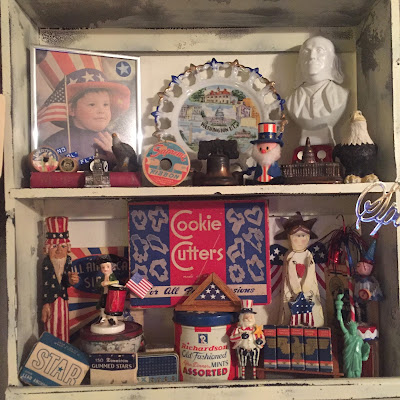 Cookie cutters were a gift from Chanelle.  Note the famous Bean newspaper clipping from when he was three years old.  Seems like yesterday.  WAH! 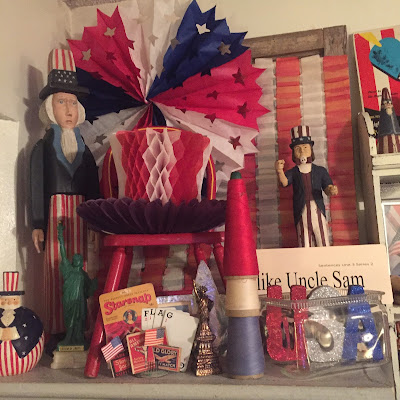 I used that little red chair here so it is completely justified in being purchased.  :D The spools are form a HUGE bunch I bought at a yard sale.  Like forty of them in all different colors.  The red, white and blue ones had to come in the house.  I see that I need to add a sparkly bit coming out the top. 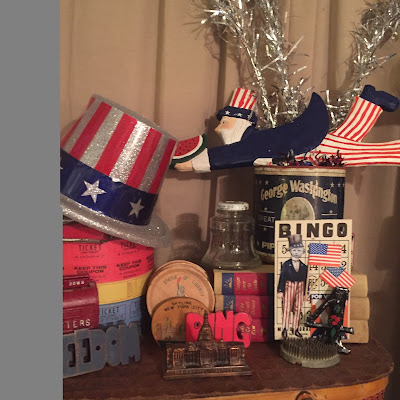 I made the BINGO card to put in a banner, but I ended up just saving it out on it's own. 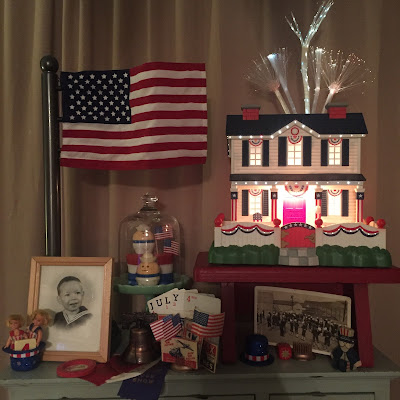 I love vintage, but I love that house too.  It's not vintage but it makes my decorations POP. 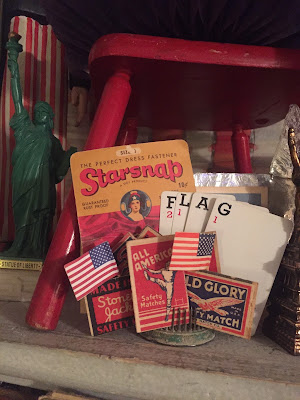 More little things.  This time all shoved in an old flower frog.

I hope you all have a nice 4th of July.  It's raining here, so I am going to the grocery store like a regular old day.  Forgive the rant at the top.  This too shall pass.