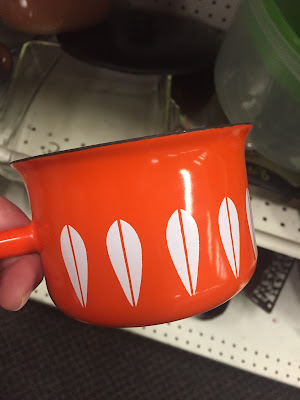 I dropped the menfolk off at the movies to see some ungodly superhero movie and I went thrifting all afternoon.  On my last stop of the day I found my very first Cathrineholm  enamel pot.  It's not my style, but I can appreciate the beauty of it.  I can also appreciate the fact that people like to collect these - so I threw that bad boy on ebay PRONTO.  It sold for $65.00 in less than 48 hours.  I paid $4.95.

I'm having really horrible sales at my booth.  I am going to give my notice next week and clear out. It makes me sick.  I have been there for five years, but the sales are just lower and lower each month.  I need to make money - that's why I have a booth - so I have to do what is best for me.  Lately I make rent and get a very small check of less than $100 - way less some months.  It will be hard for me to tell them, but I must do it. 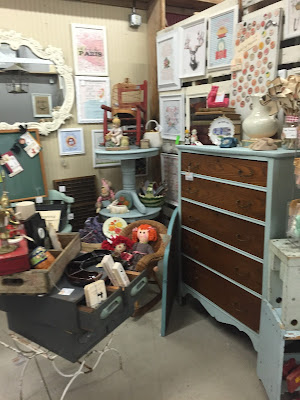 Since I wasn't 100% positive that it wasn't just lackluster sales overall and not just me or my booth or my store, Lara (sweet Lara) offered to let me put some things in her booth at the main store in town. Which, happens to be directly across the street from my store.  There's this whole competitive vibe up and down the street and if you leave one shop and go to another shop, you are shunned by the first shop.  It's crazy.  So since I was putting things in the competition AND I still had things in my shop, we had to do it all on the sly.  The day we stocked it, I snuck in the side door and kept a low profile.   (Do you know that spell check says 'snuck' isn't a word???  I have used that my whole life.  WTH!) 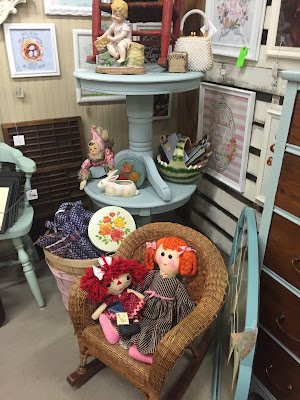 Lara specializes in her cute and clever prints and lovely painted furniture.  I brought in a few tote bags of items and a couple larger items like that little wicker rocker to add to her already ADORABLE booth.  I tried to pick things that had the same look, color palette and theme that she already had in her booth. 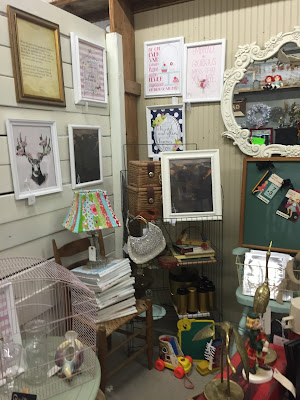 I added in my feedsack pendants, flash card pinwheels, framed flash cards and some back to school themed items and other vintage things.  After less than one week I had sold well over $100, which made me realize for certain that it's not me or my things that are the problem - it's the shop.  So, I must move on.  I'm going to sign up for a booth in Lara's store and hopefully have it set up before the holidays. 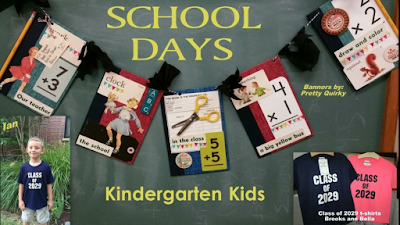 The day after we set up the booth - this photo appeared on the FB page for the store.  That's a banner that I made on Lara's chalkboard.  Of course, the owners think Lara made it.  But when I go to sign up for a booth I can show them that I actually made things they are already featuring.  (I love that silly banner made our of recycled book covers.) 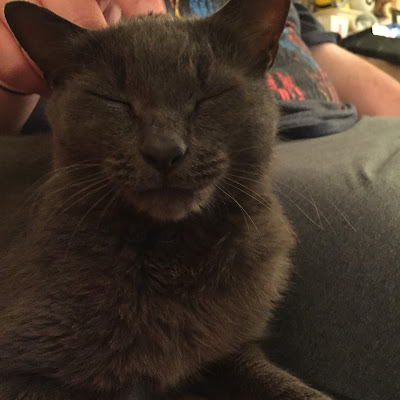 About five weeks ago this cat showed up in the driveway and never left.  He stayed under the cars most of the time.  Over the years we have had five cats and each one of them has just show up at our doorstep.  So, I knew this one was meant to be ours too.  Two weeks ago I picked him up and brought him inside and he was ours for sure.  He is very sweet and docile.  He sleeps under the bed most of the day which I think is the inside version of sleeping under the car.  He comes out for head rubs and dinner then goes and sleeps on top of the bed.  He is a very good boy all day long. 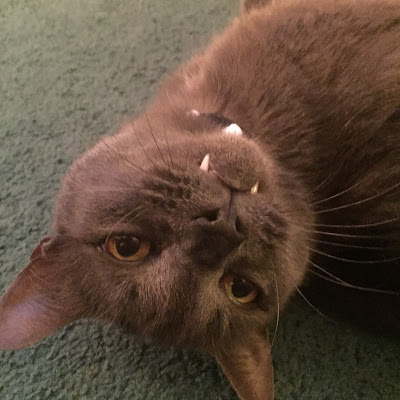 But.  But, then night time comes and he turns into the DEVIL.  He runs up and down the halls.  He careens up on the cabinet in front of the window, shoving his head through the mini-blinds, systematically snapping the slats off one by one.  He stands on his back feet and claws at the window while he yowls " Heeeeeellllllllllllooooooooooooo?" then jumps down and races down the hallway and repeats the entire production all.night.long.  As soon as the sun comes up, he is calm and sweet again.  Once you see that photo above, it is obvious that he is a VAMPIRE and that is why he is up all damn night.  I think he is getting a little better with each passing night.  Or it could be that I have started wearing a sleep mask, earplugs and taking a ZZquil before bed.  One or the other.  His sweetness outweighs his horrific behavior by just a hair.  Just.a.hair.  We shall see how he is behaving when I put the Christmas tree up.  He may be sleeping under the car again.  (I kid.  Kind of). 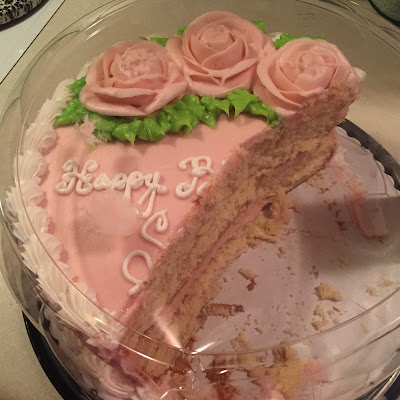 I forgot to take a photo of my cake this year.  THE HORRORS!  So, here is a half cake photo.  It was pink and had buttercream roses.  What else could I want? 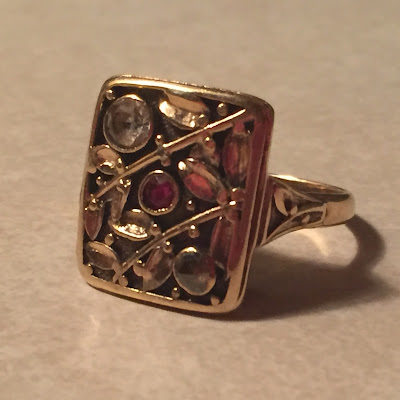 My Mom brought me to tears when I opened a package with this ring inside.  This is one of her most prized possessions.  When she was 13, her Daddy took her tot he Pawn Shop and let her pick out anything she wanted.  He was not surprised when she headed straight to the jewelry area and picked out this ring.  The owner told her that it was handmade in France and that there is an uncut diamond, a garnet and a cut diamond.  She wore it from that day and all of my life.  Since her accident, she can't wear rings anymore, so she wanted me to have it.  I begged her to keep it, but she said NO, I want you to have it now.  I am the keeper of the family jewels, so to speak.  I wear my Great Grandmother's Diamond (set on my Grandfather's band) every day.  I have a little box full of family rings from every member on my Mom's side.  It was an awfully thoughtful gift to say the least.

Speaking of thoughtful gifts - Lara made a special print just for ME! 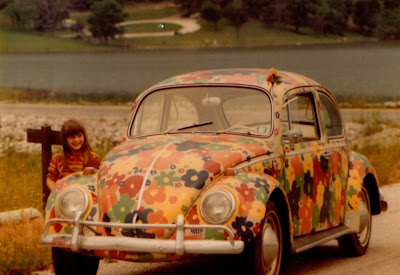 She used this old photo of me as her inspiration. 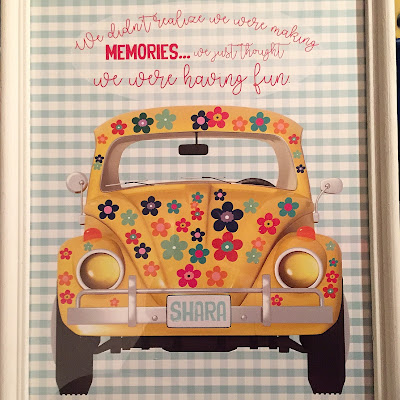 Would you just LOOK AT THAT?  First of all - GINGHAM background - then a VW bug with flowers and my name on the plate!  "We didn't realize we were making memories, we just thought we were having fun."  Isn't that the nicest quote?  I hope that's what I did with The Bean - having fun and making memories.  Thank you, Lara.  I LOVE it! 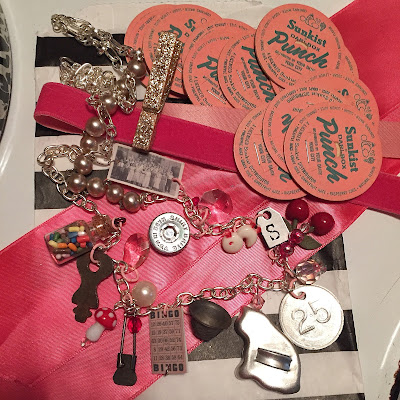 While we are the subject of thoughtful gifts and sweet friends......look at what came in the mail from Heidi (her blog Vacuuming in High Heels and Pearls was one of the first that I ever read. And, when she started commenting on MY blog - I thought I had been kissed by royalty!  Now I consider her one of my dearest friends. Her blog is gone now, but she really needs to start a new one!)  Anyway, she made me this wonderful Magpie Necklace chock full of things that she said made her think of me.  She NAILED it.  Look at that wee cookie cutter! And, BONUS, it's a cat!  There's a tiny bottle of sprinkles!  A toadstool! A BINGO card! Pink things!  Cherries!  A ducky! A Shiny Brite Cap! And on and on and on.  I couldn't have picked out better things for myself.  Thank you Heidi.  I LOVE IT!

So there we have it - another phone dump, but really more of a what's been happening around here sort of post.  Hope you are all well!
Posted by Shara at 11:38 PM