What? Another Auction? Okay!

I went to an auction on Saturday that was in a closeout store that was going out of business.  It was all new stuff - pallets and pallets of new stuff.  Lots of tools, registers, shopping carts, pallets of industrial toilet paper and paper towels, security systems, a scissor lift, pallet jacks, ladders, extension cords (SO many extension cords!) and on and on.  As I did a quick run through I spotted two vintage items in the whole place - an old metal milk crate (which had been on my wishlist) and a handmade tool cubby shelf.  I decided that they would be mine.  (Insert maniacal laughter here).

After about an hour and a half they got to the pallet with the cubby on it.  It was hidden in the center of a pallet and not very noticeable.  The auctioneer had been doing "choice" on each pallet, so I assumed that is how it would go.  But, Noooooooo.  The helper guy plucked that cubby right out of the middle and twirled it above his head - "Let's auction this beauty off!" he said.  Ugh. 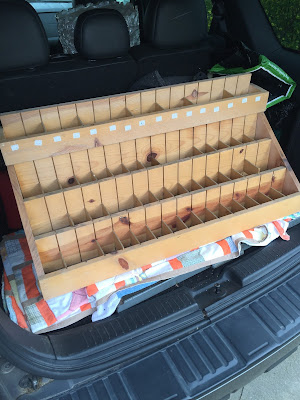 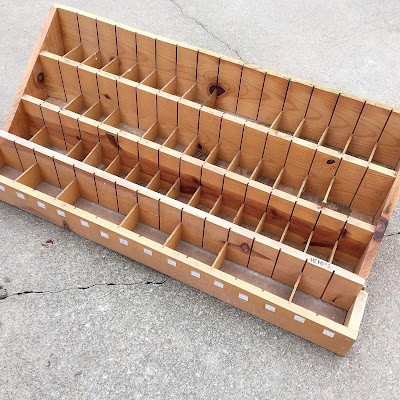 It has adjustable inserts so I can make them whatever size I need.  I know it looks like there is no bottom, but that's just the color of the bottom.  It was chock full of stuff when I bought it - saw blades, wood putty, screws, nails, WD40, utility knives, lamp parts, bolts, screwdrivers, tape and all sorts of stuff.  Most of it was new which was a bonus.  Lots of odds and ends will go to Goodwill and Lara is getting a big jar full of weird screws. nails and findings for her projects.

I was able to get "choice" on the next pallet for $5.00, so I got the metal milk crate too.  It had three nice vintage wire bail canning jars in it (priced $6.00 each for the booth), a bunch of brand new rubber jar rings (listed on ebay) and fifteen brand new packages of click pens that The Breadman uses at work.  So, $5.00 was a deal for all!

I made a rookie mistake and thought I was bidding on one thing, but I was really bidding on something else.  I ended up with a teak waste basket, a flower pot you put a patio umbrella in and a small metal stool for a total of $2.00.  At least it was a cheap mistake! 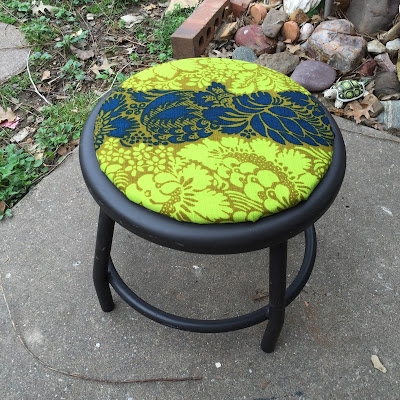 The little stool had a vinyl top with some bleach spots on it so I thought it was a goner.  But I manged to take the top off and recover it with some groovy vintage fabric I thrifted not long ago.  Sadly, that justifies my theory of buying things and hoarding them "in case I need it."  :)  My $2.00 mistake turned out pretty good.  It's headed to the college booth along with the other two items.

I bet I don't buy anything there, but it will be fun to see!