Iphone 6 Phone dump - let's see how the photos look.  I have all but given up taking my camera with me since I always have my phone anyway.  This phone holds an ungodly amount of photos, so I am taking an ungodly amount! 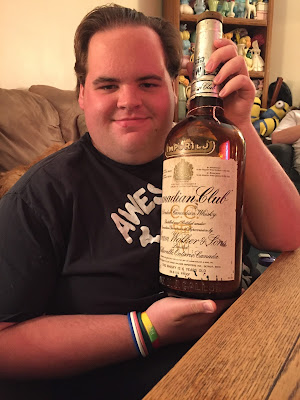 On that long yard sale route last week, The Bean found a gallon sized booze bottle that had been made into a lamp.  But, then some yahoo cut off the plug, so whomp-whomp, it's back to a big booze bottle.  It went to the Frat Boy college booth. 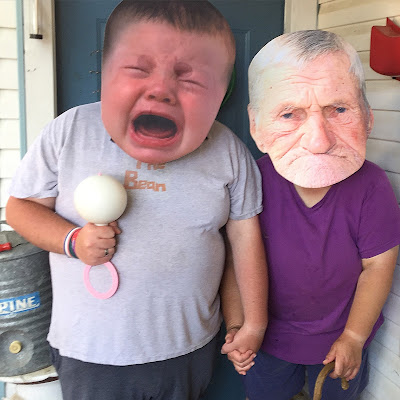 New family portrait.  :)  We found the giant baby mask last year and the old man mask this year.  We get more wear and chuckles out of these than you can imagine.  We are easily amused. 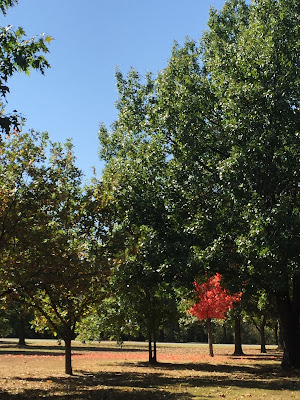 We went to the Civil War Battlefield to the free apple orchard.  We found six apples and picked five of them.  One was super stubborn and would NOT fall.  Speaking of Fall - we found a taste of it.  That one orange tree is the very first tree in the are to turn so we always go looking for it.  I don't know why it turns orange while the others are still completely green.  But it is a sight to behold! 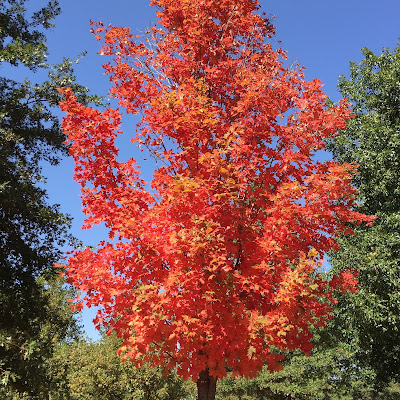 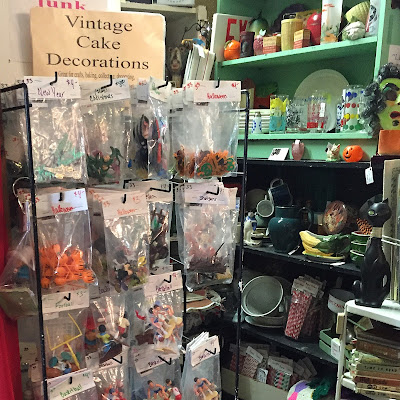 Went to the booth and dropped off a carload of stuff and my vintage cake decoration rack.  The booth is giving me troubles. Sales are very, very slow.  I have not sold one cent since the 4th of the month. I did almost a normal months worth of sales in the first four days thanks to The Junk Ranch being in the same town.  But, since then - nothing.  It is disheartening.  I am fiercely loyal to the store.  But, I really need to make some money too.  If I can sell the amount I did at The Junk Ranch and my sales were good at the booth while the JR shoppers are in town - but not afterwards  - maybe I am not in the right place for my things.  Maybe the right sort of shoppers aren't coming in there.  I don't know what to do.  Like I said, I am loyal and I like my store.  And, the very idea of moving it all and re-tagging it - OH MY hell no.  I will need to make some decisions down the line. 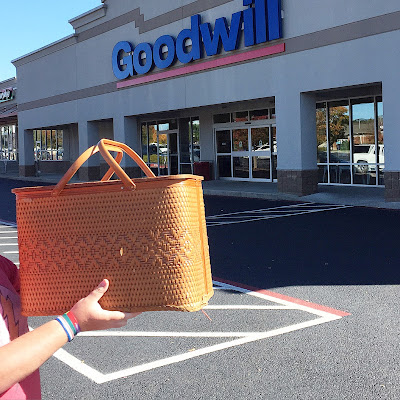 I visited the other booth and pulled a few duds and took them to Goodwill immediately.  Of course I had to make a run through!  I was rewarded with this giant Redmon basket!  Yay me!  I haven't found one in a very long time.  Of course, I have SO many that I don't need any more, but it was priced great, it's bigger than any of my others and well, I wanted it.  Ha.  So, there. 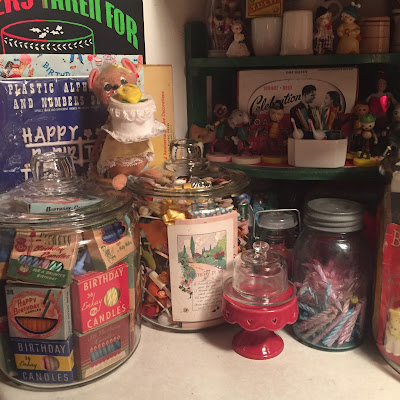 I have been pulling some no longer loved things and playing with the things that I do love.  The vintage cake decorations got dwindled down and reorganized.  This is one happy corner of my kitchen and I love it.  It is in the corner past the stove and there isn't a plug in so it is practically worthless space.  But, I love worthless space - it's a place to put stuff! 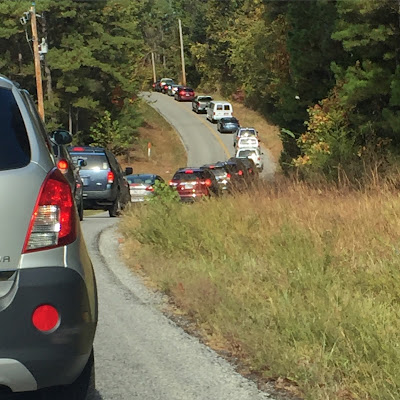 Yesterday we went to the War Eagle Craft Fair.  This was the five mile line to get there.  It took almost an hour to go five miles.  But that's part of it and we don't mind it.  We look at the scenery, eat something and listen to music. 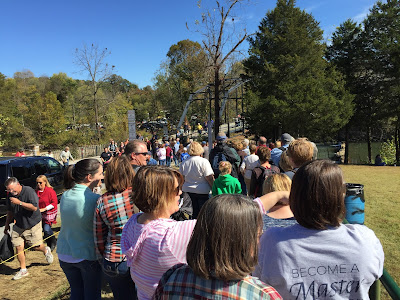 Once we got there guess what we did?  We got in another line!  Ha.  We had to cross the bridge to go to the old Mill. 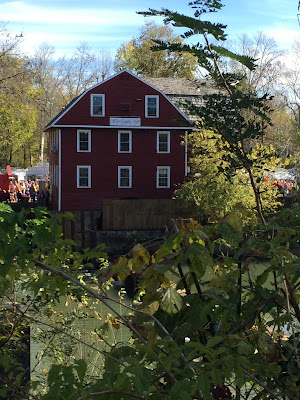 It's really pretty out there at the Mill.  We like to go when there aren't a million people out there.  It's quiet and serene - we feed the ducks, pick up pebbles and buy biscuit mix (in a actual floral floursack) and apple butter.  But on this trip, we walk with the herds of people and buy a three foot long bag of kettle corn.  Because, it's what everyone does.

Here's a pointer - If you are going somewhere  - see if they post on Instagram.  The War Eagle Fair posts throughout the year and it is interesting to see those posts.  But, during the Fair, they have giveaways.  First one to see it and get to the Fair Office, wins.  I set my phone to send me a notification whenever they posted the day we were there. 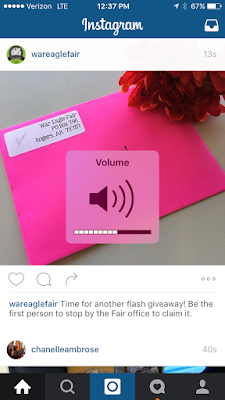 Just as we were about to step out of tent #3, my phone dinged and this was on the screen.  I looked up and the Fair Office was feet away.  (LOOK Chanelle - you are on there!) 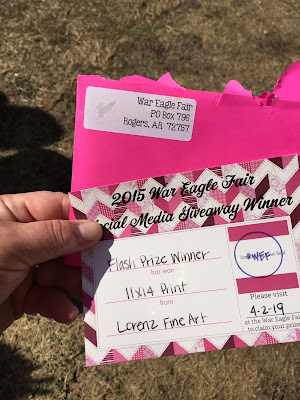 I won!  Yay!  We had just left that booth and admired the work of the artist, so we were excited to get a free print.  But, when we went back, he was gone and his booth partner was there and she gave us a set of note cards instead.  Which is nice and it was free and fun- but we kind of wanted that print. Not to sound ungrateful  - the cards are very nice.  It was funny, because I was just SURE that I was going to win something.  And I did! 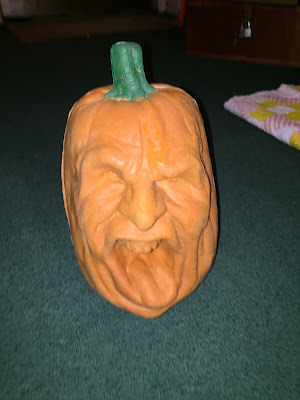 On the way, we hit a few sales.  I found this pumpkin for $1.00.  I knew it was funny and something rang a bell about it, so I grabbed it.  When I got home, I found out he is a Jack Oh Lantern and worth some good money.  He is on ebay right now. 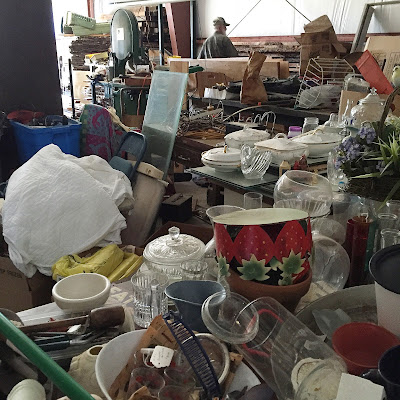 We also stopped at this huge building full of junk.  I picked out a few things and went to find someone to pay.  I asked the older man but he seemed to think his wife should do it.  I couldn't find her, so I asked a different man and he said he couldn't do it - the lady would have to do it.  She came out and walked past me where I asked if I could pay. She kept on walking and came back by me two more times before she went back into the house and never came back out.  My stuff is still sitting in her chair.  It was the weirdest thing.  I had almost the same thing happen last week except a lady put her hand out at me like 'Oh no you didn't' and said, "I am selling this table right now, I will deal with you in a minute." To which I replied, "The heck you will" and walked off.  I don't need anyone's junk that bad.