There's a lady that lived not far from me that used to like to buy junk and have sales every so often.  I bought a lot of things from her for my booth.  Then she moved, but I kept running into her at sales and the thrifts.  Lara and I saw her one day and we all discussed having booths and she decided she wanted a booth too - so I set her up where I have my booth.  It's funny, I still see her at almost every sale and thrift I go to - it's like we are on the exact schedule only I am five minutes behind her. Sometimes I see her carrying things out to her car that make the mean old jealousy bug bite me. But, luckily, she is super nice and she has started picking things up for me.  Last week she had an old BINGO boxed set and a travel Scrabble game for me.  She paid 75¢, I gave her $2.00 - win-win.

One of the things that she has in her booth is a huge old professional BINGO cage with Pink Pong ball numbers and over 200 chipboard cards.  Every time I go look at it, I just go on and on about it. She had $50.00 on the whole set, which is a super great deal.  Too much for me to pay because I am CHEAP and I don't need it.  I thought she should mark it higher, personally.  I even told her that.

Earlier this week, for no reason and completely out of the blue, she sent me a message - "You can have that whole BINGO set for $20.00."  WHUT?  I never asked for a better deal on it - I kept telling her to price it for more money!  But, she wanted it to go to someone that would appreciate it and market it better that she knows.  That is one of my goals in reselling - get the item into the hands of people that appreciate it and will do it right again.  So, it was nice to have the shoe on the other foot. 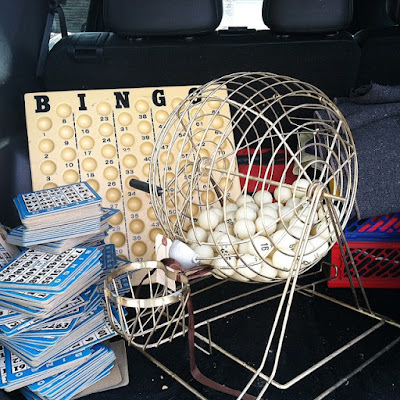 I didn't really realize how huge this thing was until I got it home.  It's a good old one with the metal ball catcher.  Two of the ping-pong balls are a bit squished and The Bean is trying to work out an idea to pop them back out.  This plan consists of an upholstery needle and a bicycle tire pump.  We will see how that goes.  :) 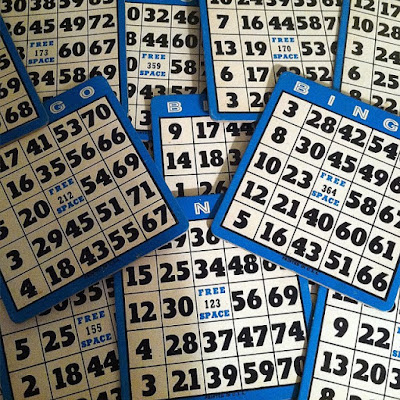 There are 234 heavy duty chipboard cards and thousands of clear red makers.  Plus the cage and the big board that holds the balls after you call them off to people.

It's super cool and I think $20.00 was a deal.  She told me to sell it wherever I wanted and for however much I wanted.  Isn't that nice?  The BINGO Cage will go to The Junk Ranch and the cards are being bundled up for individual sales in the booths and at TJR.  I figure the cage is really a decorative item and will sell as such.  *Fingers crossed*  It's nice to have junker buddies that "get you", isn't it? I'm new to knowing any other junkers but I have five in my life right now that help me find junk and think of me when they are out and about.  Thanks junking buddies!!!

**The Junk Ranch is three weeks.  Three weeks to get ready minus the time I use for my usual household chores, keeping two booths stocked and ready, thrifting for more junk for those places, a couple of days to go to the HUGE motorcycle rally in town and MAYBE get some sleep - that doesn't leave much time.  The pressure is ON!

***PS - Thanks for all the nice comments ab out our new girl, Dory.  She is fitting in nicely and hasn't lurched for the door in two days.  Along with her love of milk, she also has a love for Deli Turkey.  Open the fridge and she comes a charging.  I told her she was pretty spoiled for being homeless!  If you give a homeless person a cheeseburger, he doesn't say,"I want caviar!"  But she turns her nose up at canned food and wants mil and turkey.  Worst part?  She gets it!  <3 p="">
Posted by Shara at 11:22 PM