Saturday morning I was still deciding what to do that day - go hit some sales - although there weren't many advertised and Lara was out finding not much, or maybe go to an auction that looked promising  - an entire household and shed full - that could mean some box lots and things like I like to buy and sell.  Hmmmm, the day stretched ahead of me.  What to do, what to do......*ring* ring*  My cellphone rang  - it was the owner of the flea market where I have my booth.  Her voice was panicked and I could tell she was in her car.  I couldn't imagine what was wrong. "Shara, the store flooded last night. There's water running out the front door. Come as soon a you can!"

Aye-y-yi.  I have to tell you something.  I didn't exactly RUN out the door that very minute. The idea of what might be happening out there freaked me out  I pictured water three feet deep, everything floating and swimming in water.  And, I forgot to mention...it was the toilet that had overflowed and caused the flooding.  So, GOD KNOWS what else might be floating in there.


I got ready and headed that way.  But, the car pulled into the Super Cheap Thrift.  I still wasn't ready to see the carnage.  I have watched too much Katrina footage as of late and I was really, really expecting a heinous sight.  I looked around a bit, but the guilt was getting to me, so off I went.  I had actually remembered seeing a small shop vac there the last time I was in and I was hoping it would still be there.  But, it had sold.

When I got to the flea market (which had only been one hour since she called) there were lots of cars out back, so lots of people had come to help.  There were several pieces of furniture sitting out in the sun and lots of throw rugs tossed on the walls to dry.  It was pretty wet outside around the door, but it had also rained the night before and it has flooded then too, so there are always sandbags by the door. ANYWAY - When I opened the door, there wasn't any water.  Hallelujah!  The floors are concrete and they were a darker color than normal, but there wasn't standing water that I could see.

Then I rounded the corner to my booth and Uh-Oh.  My stuff (the movable things and things on the floor) had been moved out and were scattered across four different booths.  When I set up the booth, I had bought an indoor/outdoor carpet remnant and put it on the floor, then sat shelving on the carpet. That carpet had been cut out, but was still under the shelves all soaked with water.  I have really heavy old solid wooden shelving in there and it is stuffed with merchandise. So, I knew I couldn't move it alone. I called for back-up, The Bean and The Breadman, and then set to work.  I wiggled a shelf this way about a foot, blew a fan on the floor and it dried up, then wiggled it the other way and blew the fan on it.  It got dry fast since it was just concrete.  THANK GOD.  The boys came and helped me move the huge shelves out enough to cut and pull the rest of the carpet out.  We used a Shop Vac and the big fan and got it pretty much dried out.  I left the big fan setup overnight just in case the bottoms of the shelves were wet.  In the end, after it was all said and done, the only things that were damaged where three old empty scrapbooks.  And, even those are out drying in the sun.  I think it will just add more "patina" to the pages.  :)

The good part was that so many people got there and jumped right in to help everyone else.  There were mass amounts of fans and shop vacs everywhere.  Lots of people mopping and dumping buckets.  The toilet had run out of the tank, so it was good clean water and actually, the floors look nice and clean now.  Not the ideal way to clean up, but hey, it worked!

I always liked the way my booth looked with carpeting - I am the only one with carpet so it kind of set me apart.  But, not that it's gone, I kind of like it better.  I might look for an area rug to put down, but no hurry.

While I was putting things back, I pulled a bunch of duds and pulled some things I think will do better at the Junk Ranch and did a little re-arranging.  The worst part was that I had just worked all afternoon on Thursday making it all over.  UGH.  But, now it has a different look again.  Switch it up, I guess.  Also, a lady came in the booth, looked at me and said, "I LOVE YOUR STUFF!"  Then she told me that she buys from my booth and from me at The Junk Ranch.  That made me happy!  I was also happy that The Breadman heard that.  He hadn't been to the booth in about a year and a half and he's never seen my set up at The Junk Ranch.  So, I was glad he heard that someone knew me and liked my junk.  I do know what I am doing....sometimes. 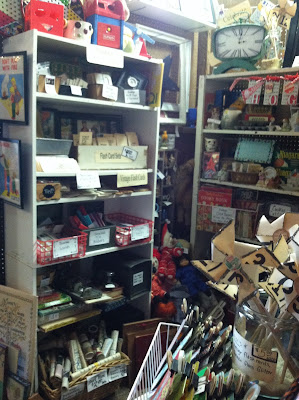 Here's how it I left it on Thursday.  Who knew I would be back so soon!?

The best part was that none of the vendors were mad, everyone pitched in and helped, the owner ordered pizza for everyone and the store was open for business by 2:00.

But, it was not one of the ways I had planned to spend my day, that's for sure!