A Journey, Some Junk and Middle of the Night Phone Call

This morning the phone rang at 2:00 am.  Is that really even considered "morning"?  It was really the middle of the night.  I had been asleep for little over one hour, I had not slept the night before due to storms and I had driven a good portion of the day Sunday, so I was beat.  Tired, tired, tired.  But, when a phone rings at that hour, you JUMP up and answer it.  It was The Breadman.  He was on the way to work and the truck just stopped running.  Right on the Interstate - in a construction zone - on a bridge with those concrete walls on each side.  No shoulder, no median, nothing.  His first impulse was to call me to come steer the truck while he pushed it off the road.  Except three minutes earlier I was in a deep sleep and I was in no condition to jump in the car and drive.  Not to mention I had to put my contacts in, put on some clothes (and a bra for heavens sake) and then actually drive to him about six miles away.  Long story short (too late for that, am I right?) just as I was putting on my shoes to leave, he called to say that his boss had driven past and noticed him and came back to help him push it off the road and then drove him on to work.  BIG SIGH of relief.  Not that I wouldn't help him - I was going to help him.  It's just I was not awake and I do not drive at night in the first place PLUS since I cannot reach the pedals in his truck he usually makes ME push the damn truck!  What a night.  We got a tow truck to it about noon and by three we had a call saying what the problem was (a burned out coil of some sort) and it will be ready tomorrow.  $400.00 plus the $75.00 tow truck is hard to swallow - but he could have been killed where he got stranded, so I am thankful that it is all over and easily repaired.  Not to mention, I got to go back to bed.  After my heart slowed down. Those night time phone calls are not fun, are they? 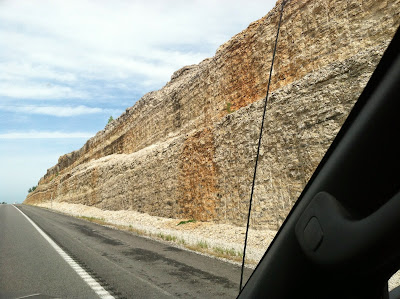 I am also thankful that it happened to just him close to home rather than to all three of us on our trip yesterday.  Lots of long isolated roads with no houses or help in sight anywhere.  We drove to Carthage Missouri to meet up with my family from Kansas and Missouri. Once a year we converge on a city park for about four hours.  We visit and eat and have a grand old time.  We all keep in touch other ways, but we don't see everyone face to face that often - so these meet ups are great for a hug and some one on one time. 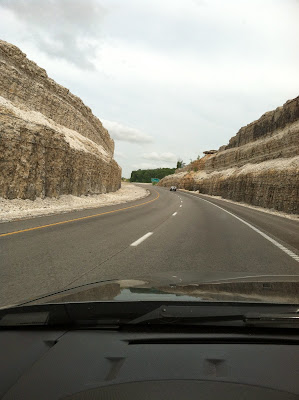 I always like to pretend we are in Utah or Colorado when we go through this part of the highway.  But, it's really just on the MO/AR line. 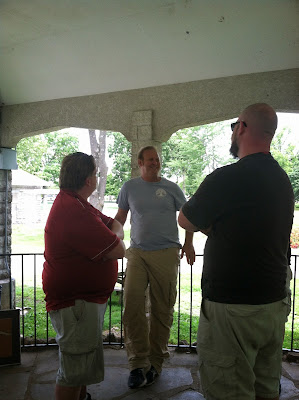 There were five men from three states in four different cars and they all came wearing khaki cargo shorts.  It was funny.  Like the official family reunion uniform or something. 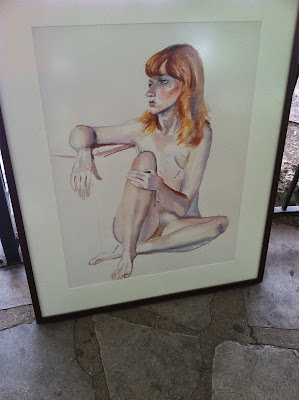 Hide your eyes!  Nakedness!  (I cropped out her - uh - stuff)  My cousin brought a bunch of things from his Dad's estate to share with the family.  Pottery, woodblock prints, oil paintings, posters, sculptures and other things that my great Uncle had made.  His stuff is a big deal in certain areas of the art world.  He had too much and wanted to share some things with us.  This is also where I got the pottery a few weeks ago.  It was so generous of him to do that!  I ended up with a five foot self portrait of my Uncle, a woodblock print of a Goat from a book he illustrated and a oil that my cousin did for a movie.  My Uncle was big on nudes.  (Scandalous!)  There were several yesterday and we all got so used to them, no one realized that they were prominently seen in the background while my two year old cousin blew out her birthday candles.  That's a video for the memory album! 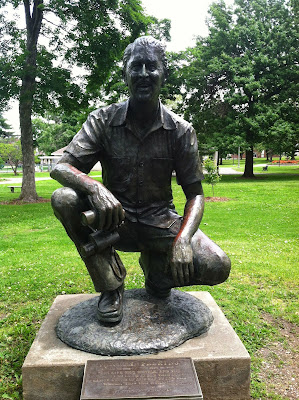 There is a statue of Marlin Perkins in the park.  He was born in Carthage. 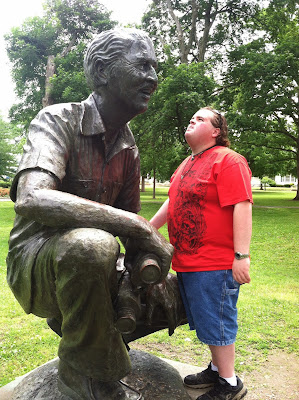 Did I mention that it is HUGE?

I would hate to leave you with nothing but a journey - so her's the junk from last week.  Just a few things - it has rained too much for yard sales and I have been too busy pricing for The Junk Ranch to hit many thrifts. 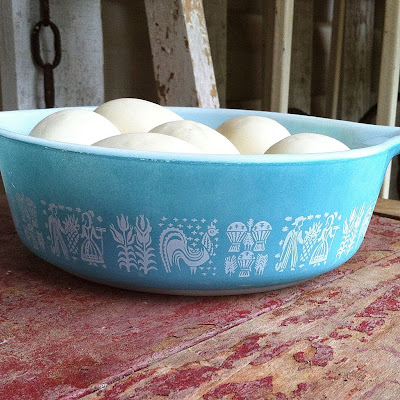 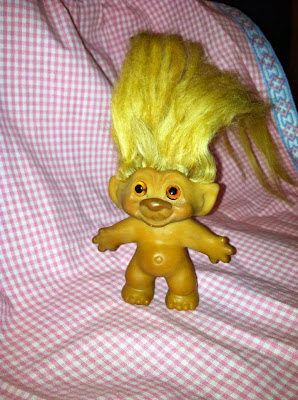 This is a vintage DAM troll from Denmark with real wool hair.  He is discolored a bit - I don't know how or why.  I mentioned this in my listing yet I have had countless questions from one person about it.  I mean, I only know what I know, right?  Question after question and then the last one said it was only worth about $8.00 for the yes and hair only.  Maybe that's right, I don't know.  But they are hard to find and collectible.  eBay said to start it at $39.99, but I only started mine at $19.99.  And I did sell that Blythe.....  Anyway, I am afraid that person will buy it, then cause be grief over it.  Ugh. 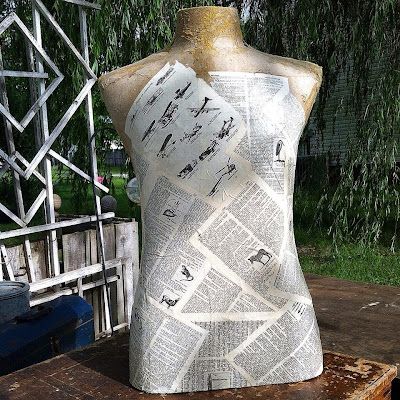 And lastly, you will be happy to hear - this old mannequin form.  I thought it was some sort of a cardboard Hobby Lobby thing at first.  But it's a heavy old form with a wooden interior that should be on some sort of a stand.  I hate that it has all the dictionary pages modge -podged on it.  I want to take them off, but those suckers are ON there.  So plan two is in the thought process.  I'm hoping Lara and I can use it in the booth for some vintage clothes and jewelry somehow.

Speaking of our friend Lara, go give her some love if you follow her.  She hasn't talked about it yet, but she lost her precious Dad last week and she is just so very heartbroken.  Bless her sweet heart.  <3 nbsp="" p="">