The Week in Junk: Slim Pickin's

Thursday I had to go put a few things out at Lara's and mine's tiny booth.  Since I managed to leave the house sans the menfolk, I also managed to hit FOUR thrifts all by myself in addition to working the booth.  My vintage Christmas radar is in high gear.  I am panicked because I have the big booth chock full, but once the big blowmolds and stuff sells, I don't have anything to fill those spaces.  I don't really have anything Christmas to take to the tiny booth because it will surely sell at the big booth and it may or may not sell in the tiny booth.  I don't want to take things to the tiny booth just for the sale of taking them and have them NOT sell.  We are still learning the ropes at that tiny booth. Lara was pleased with our first full month's check.  I think she made about twice what I did. But her items are more pricey (as they should be for her awesome handmade signs), so that makes sense.  I am still missing several things that have either been shoplifted or misplaced in that giant store.  It's a crapshoot if I will ever see them again.  I like selling and making money, but I really don't like not selling and not making money even more.  But, it is a small spot, easy to get to in town and hardly any work at all.  So, the extra money is good, right?

So, I went a little off track there, didn't I? 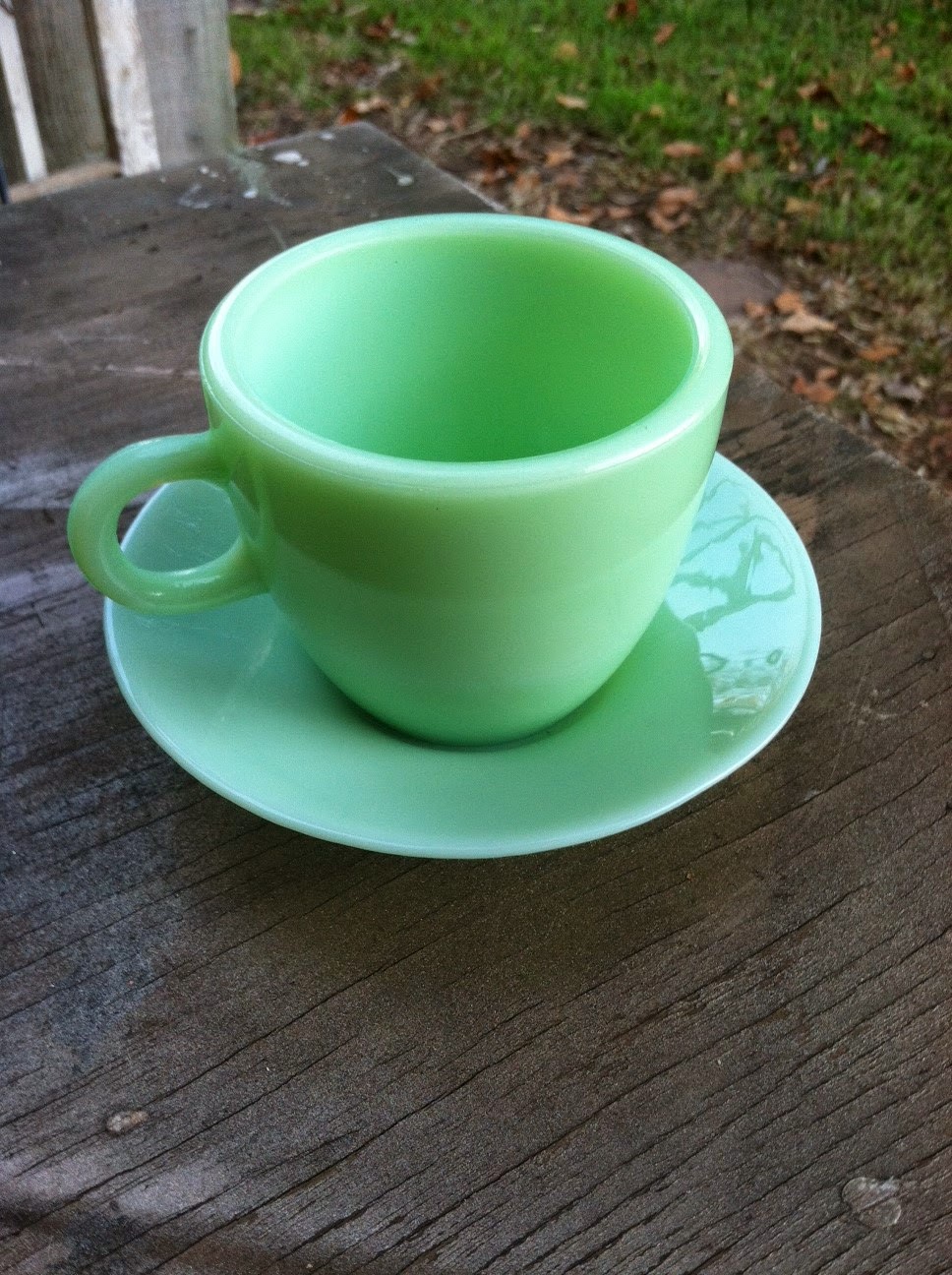 I spotted this Jadeite cup and saucer on the shelf at Goodwill and dove on it.  I have never, ever seen Jadeite at a thrift.  Ever.  But, now I find out that it is a reproduction and not a cool old piece.  But sometimes people like repro's so they can actually use them and not be worried about breaking them. It 's going to the booth in the Christmas area with a nice red Shiny Brite plunked in it. 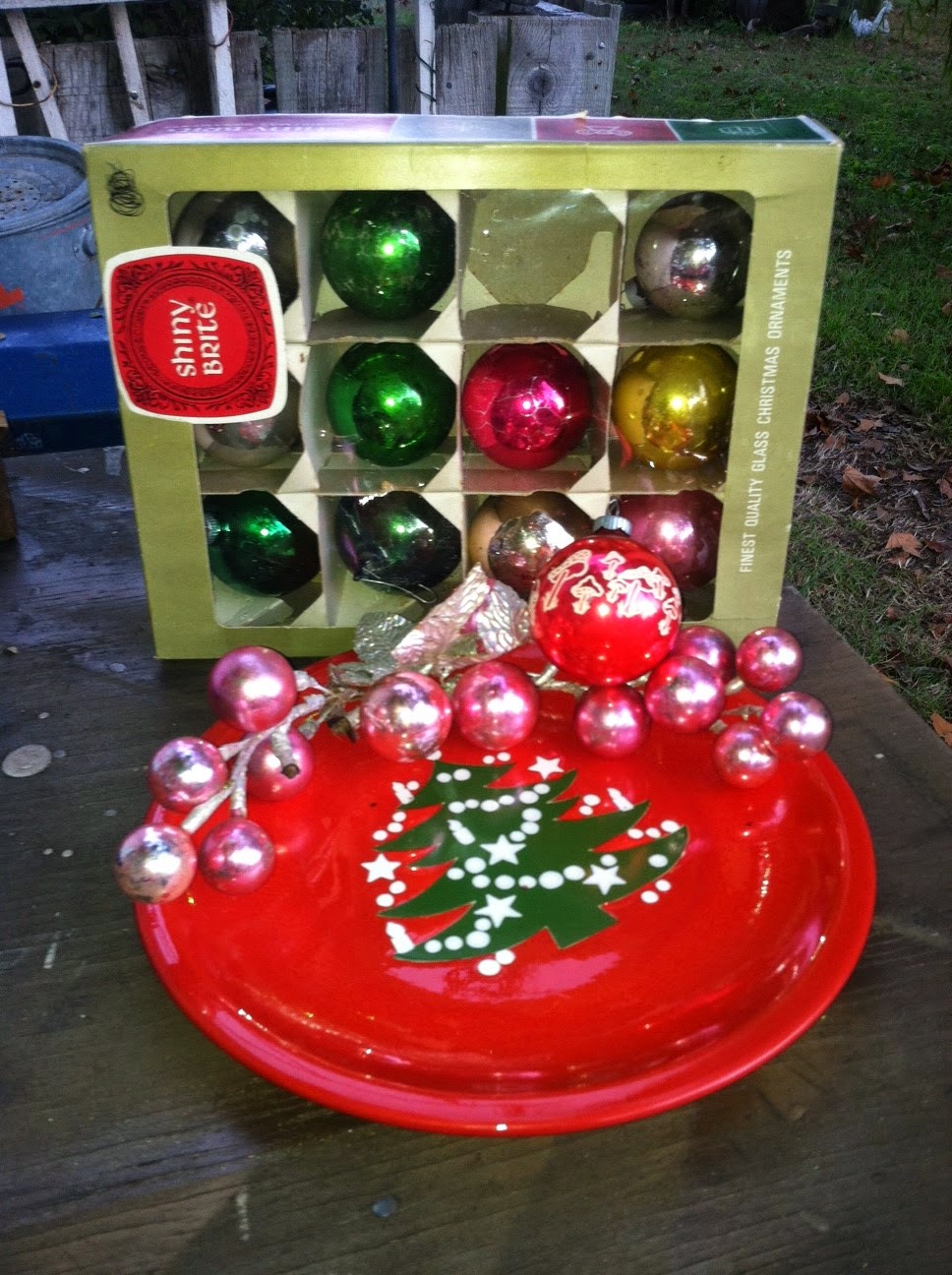 The thrifts are putting out the Christmas.  So far, the Salvation Army has the most out, so I need to go there OFTEN.  All of these things came from there.  A box of not so old but not so new Shiny Brites. I bought it for that one missing ornament.  I will replace it with one I have at home and put it in the booth.  The pink mercury glass grapes are mine forever and ever.  Love those things.  The Waechtersbach plate might go on ebay - it should sell for $25.00 or so, but the fear of breakage makes me think I might put it in the booth for $12.00 and call it good.  (Speaking of ebay - the Blythe ended at $515.00 if you weren't watching. What a fun little find that turned out to be!) 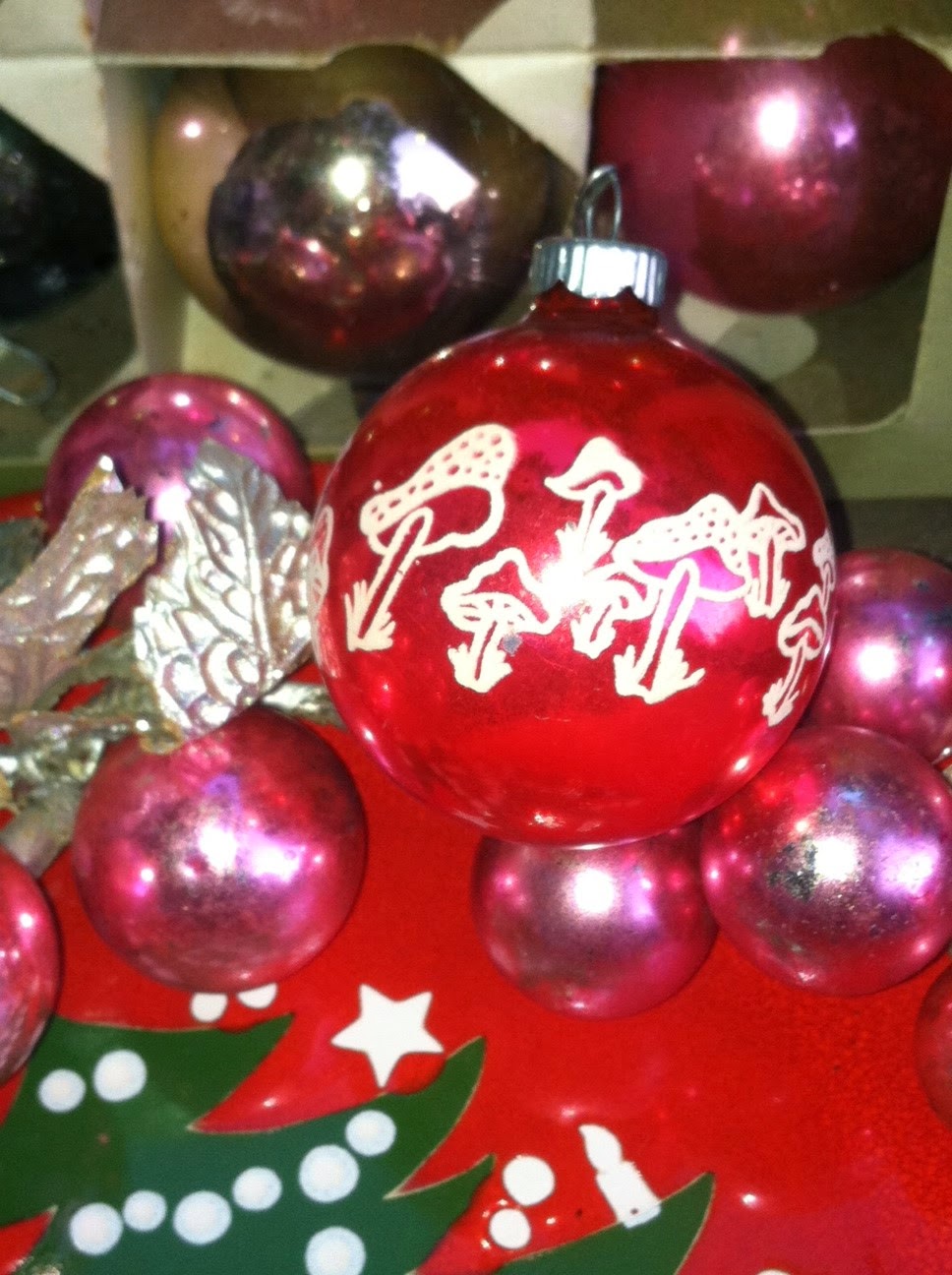 Here's the ornament I kept - a red toadstool Shiny Brite.
I mean, COME ON, how cute is that? 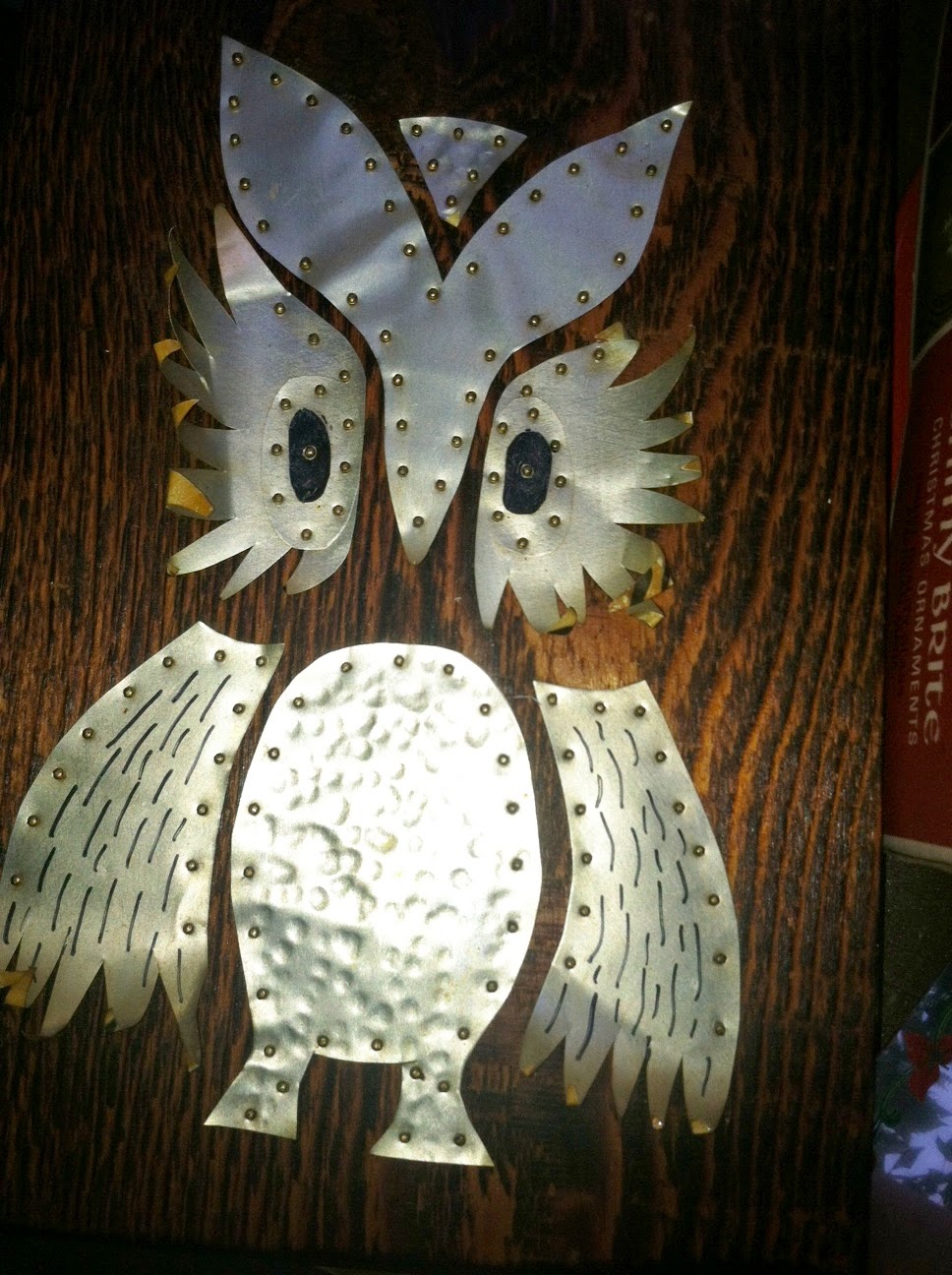 Here is something I bought for the tiny college town booth - an owl plaque.  This one is made out of pressed Coors Light cans.  You can only see the Coors logo if you peek at the back of the tin. 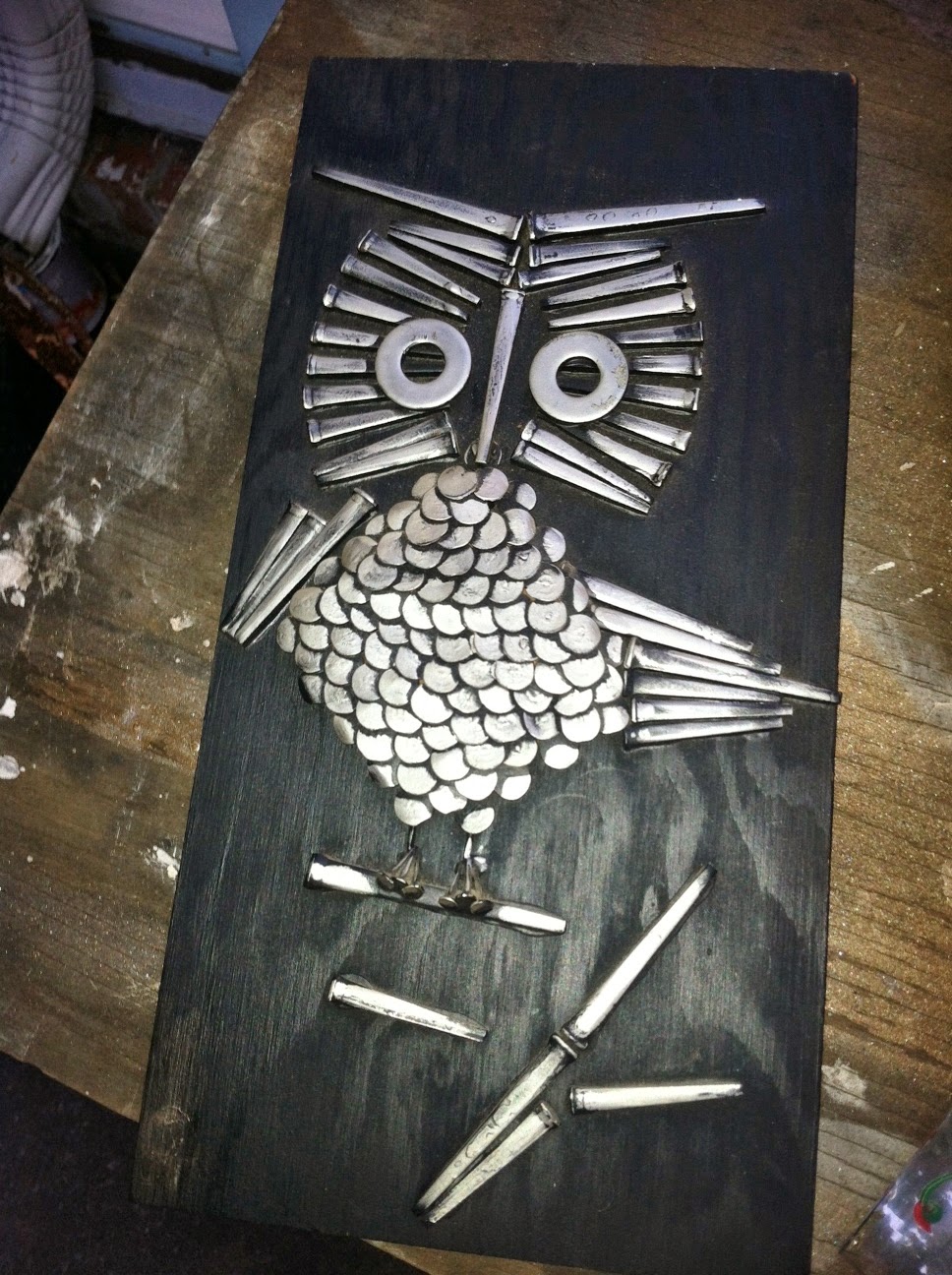 And another owl plaque - this one made out of nails.  After I paid for these and was waking out of Goodwill, I heard the cashier and the people behind me talking about how the whole "owl trend" is over.  I think (and hope) they were talking about the 1970's Owl trend, because I still seem to sell them okay.  But, I could be wrong.  Trends seem to come and go lately.  I used to make my booth rent on those silly Scrabble word packets I made up.  But, I don't think I have sold one in a couple of months. 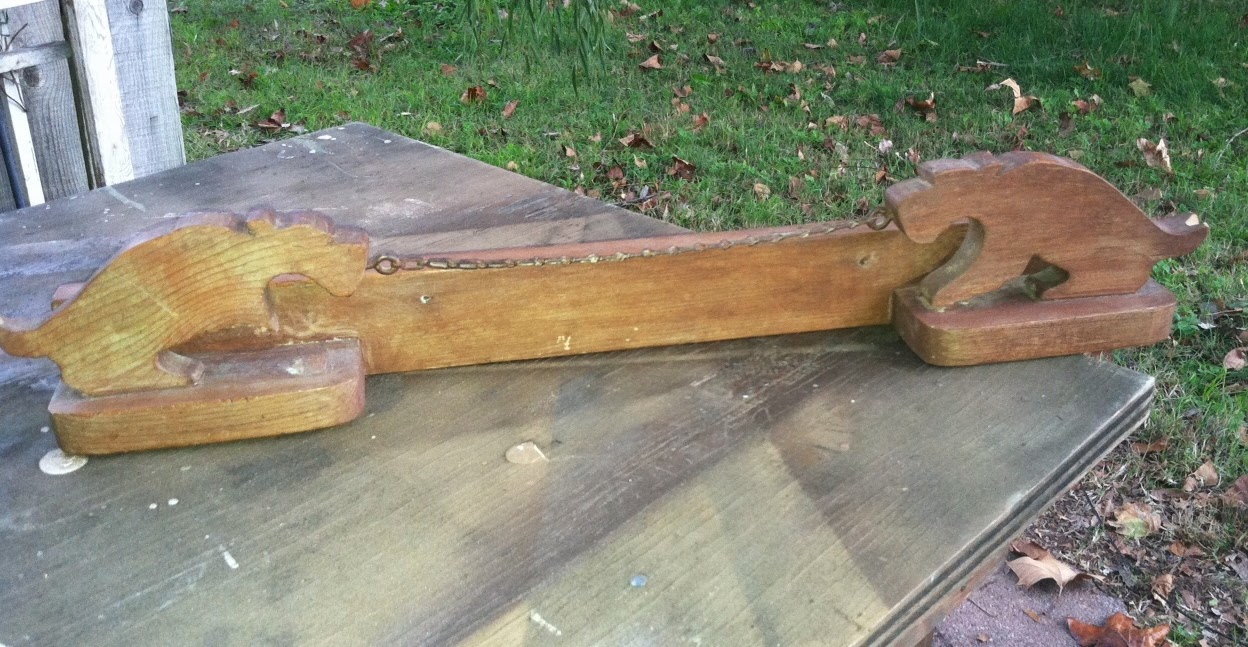 This little folk art thing is neat.  It's two dogs and they have a chain in between there teeth.  It hangs on a wall or sits on a shelf and you can hang a towel or something on the chain.  One of the dogs legs is damaged, but it was only $1.00 and I can see past that imperfection. 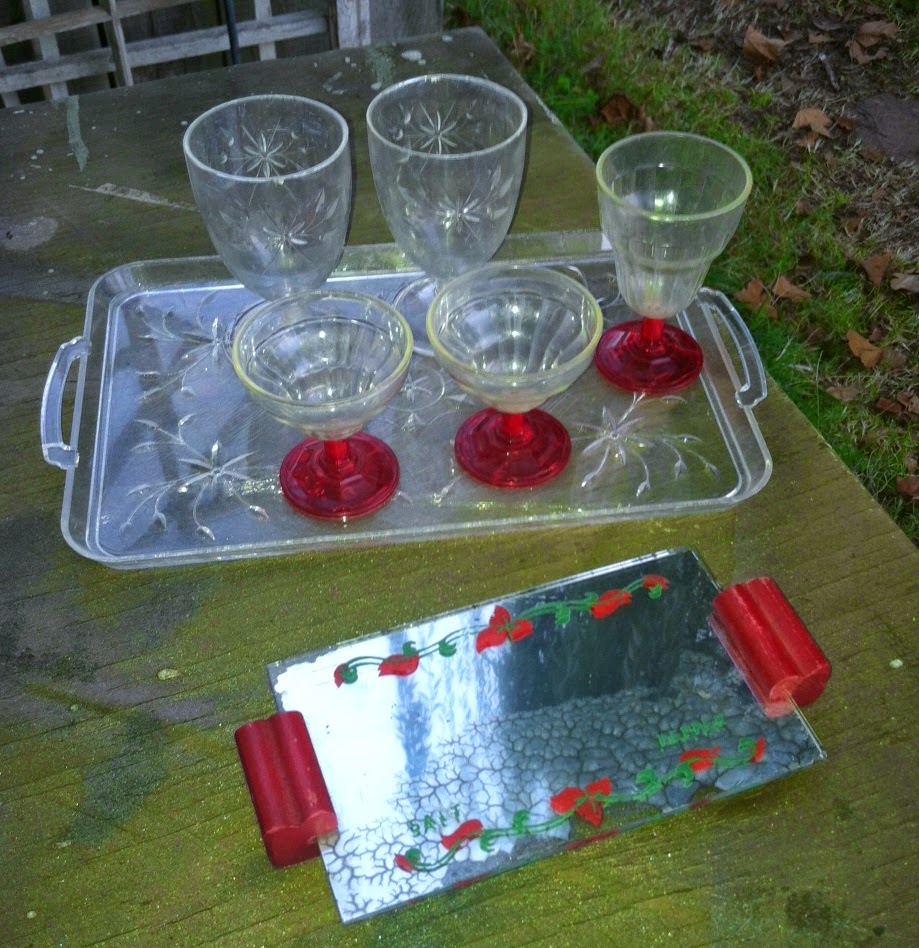 That little depression glass set is a) plastic and b) a toy.  I can just see a tiny tot in her dress and heels taking Daddy a bourbon after work.  So sweet.  :D  The little mirrored tray says SLAT and PEPPER on it.  I think I have a red set  that will fit on it just right for the booth. 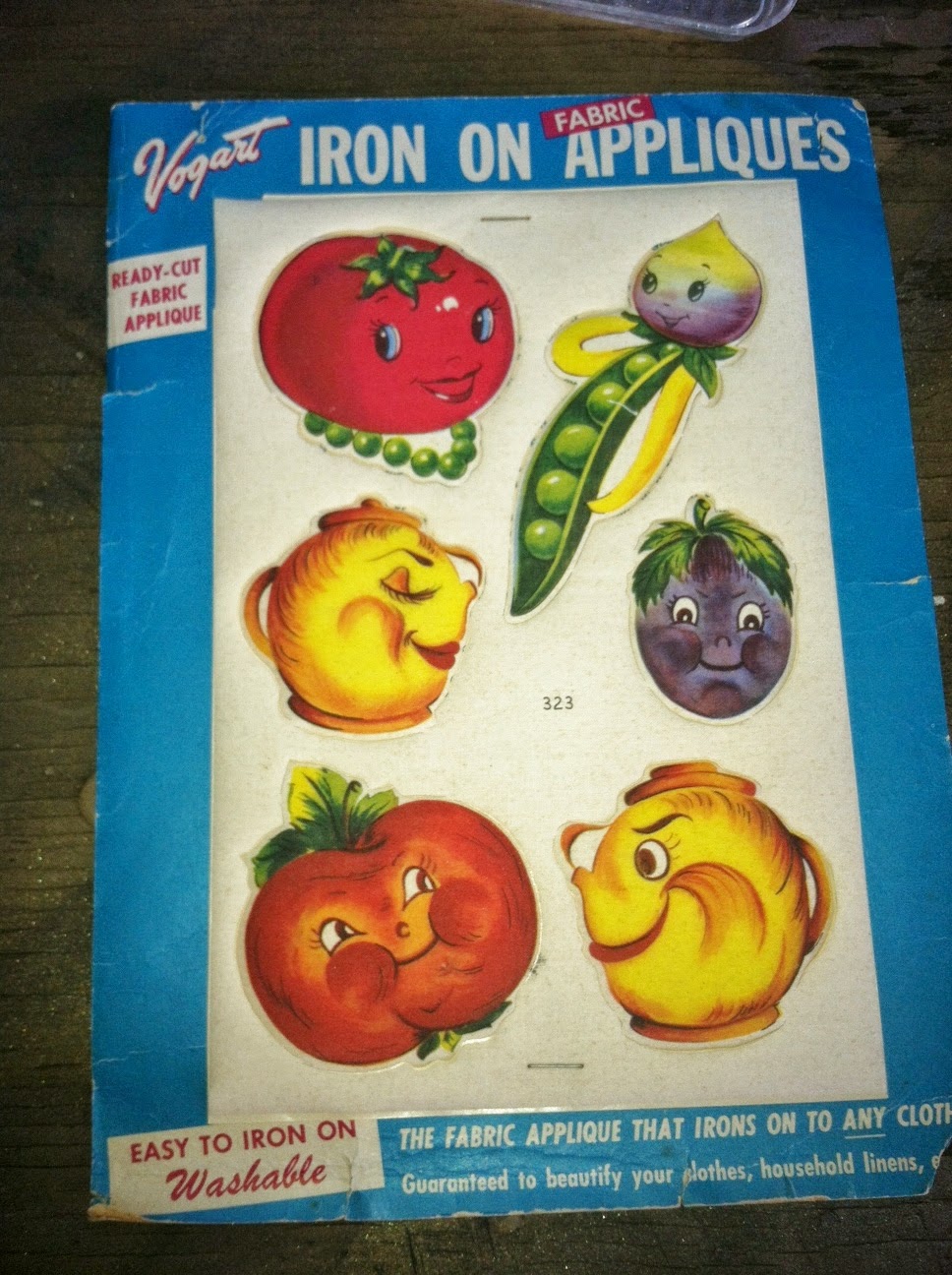 And, my last and most fun find - this sheet of old iron on appliques.  "Guaranteed to beautify your household linens".   I scanned them into my computer so I can use them in crafts somehow.  Love that silly pea!  And the tomato with the "pea"rls!

Tomorrow is our anniversary at the big booth store - I have had my booth in there for three years. We are having cake and treats, door prizes and sales.  I will be working in the afternoon and slipping some more vintage Christmas into my booth when I can get in there.  Hopefully it will be a busy day!
Posted by Shara at 11:39 PM