I know Christmas is technically over, but we keep it going through New Year's over here.   I love the house this time of year with the twinkling lights, the fun things, the tasty treats (scored at bargain prices on Dec. 26th), the holiday movies and the relaxed atmosphere.  So, HO HO HO it's still Christmas!

I wanted to blog about my Village since I did it a little different this year and I like to be able to look back next year and see if I want to to do it the same or mix it up again.  I liked it, so I will probably do it again. 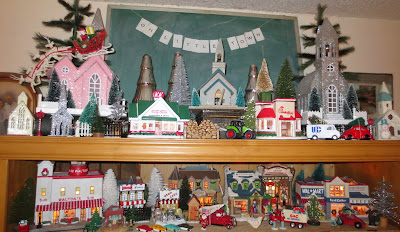 I used to collect only Grocery Stores since The Breadman and I met working in a grocery store.  But, then I got out of the grocery business and he did too - sort of - to work for Wonder Bread/Hostess Cakes.  So, I started picking up bakeries if I found them. So, there are no houses in my village - only businesses. 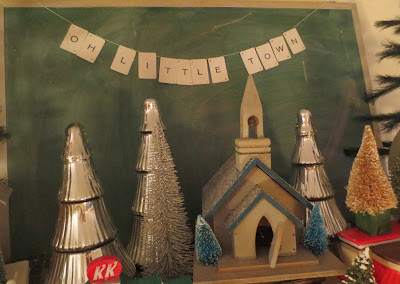 I keep that big old chalkboard on top of the cabinet all year long and I didn't want to have to move it, so I incorporated it into the scene with the letter cards.  I was going to make them spell out "Merry Christmas" but then, "Oh, Little town" popped into my head.  That was perfect!  Next year I will make a better banner - I did it on a whim and in a hurry and I had to stand on a ladder IN FRONT of the TV which the men of the household frowned upon.  I will also add some stars or snowflakes on the chalkboard. 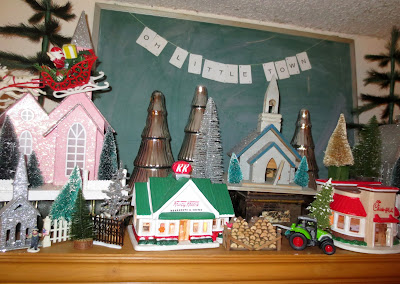 The top shelf is all my glittery churches along with a Chick-fil-A (closed on Sundays!) and a Krispy Kreme.   We LOVE us some Chick-fil-A at this house and the few times we have had the pleasure of a Krispy Kreme it was delicious - plus it IS a Bakery.  I found the tractor at Dollar Tree and set it up there by the woodpile.  Those big Mercury Glass trees were an after Christmas find at Wal-Mart a few years ago.  I love them. 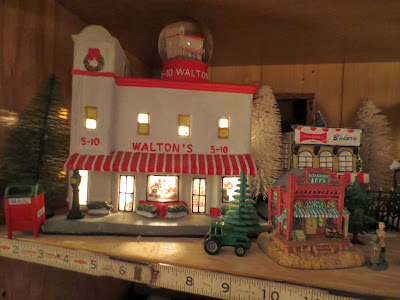 This is the Walton Five and Dime which is located in Bentonville.  It was the original Wal-Mart.  The Little Debbie plant is not far from here and it is a Bakery, so it fits in.  The little General Store in the front is one of my original stores. 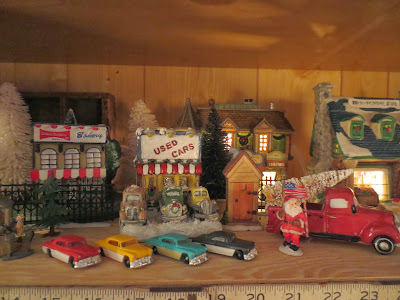 The used Car dealership isn't a store or a bakery, but I LIKE IT so it stays.  Love the old cars.  The red pick up truck is for Sam Walton and his old red pick up truck.  And, yes, I put a tree in it - I don't care if everyone else is doing it too - trees + trucks = awesome. 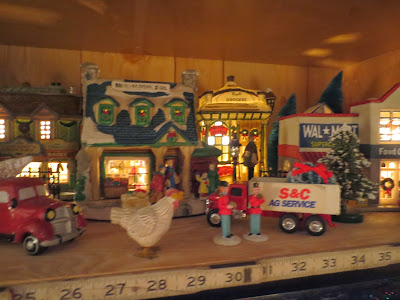 Another General Store, (or three), a S&C AG Service truck full of wreaths (S&C = Shara, Curtis/Christopher).  The giant chicken is my homage to the giant chicken statue located in the next won over. 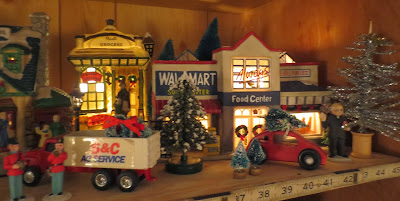 Another Walmart (I do live in Wal-Mart country, you know), a red car with a tree (red car + tree= awesomesauce) plus a miniature tinsel tree I made.  I plan on making more of those to sell next year. 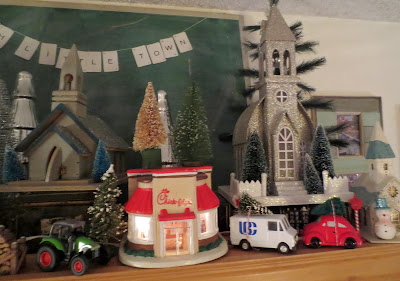 The UBC truck is from the old Wonderbread Company, more churches and lots of bottle brush trees. 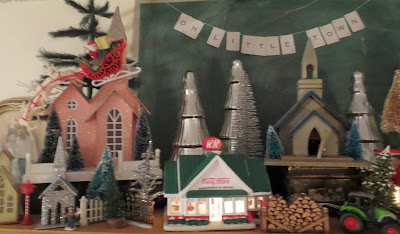 That's it for the Christmas posts this year.

I hope you all had a nice Christmas!