This morning we had a bright and early appointment with the A/C guy to check out our A/C unit before the warranty expires.  You know that is just when things go bad - as soon as the warranty expires.  Yesterday the temperature in the house was fluctuating a few degrees and it is always, always, always precisely 72 degrees in our house.  So, I was worried that it was the END.  But, everything checked out A okay, so that is good news in my book.  Since he was early, I was up and ready to go hit some sales when he left before it got really hot out.  It was 95 today.  Yuck.  It was the kind of heat that makes the top of your heat feel like the sun is leaking in on your brain.  I only went to three sales, then came back to pick up the boys and go to a sale in town that I saw on Craigslist, then out to eat, grocery shopping, a Goodwill run (I left empty handed) and back home to the nice cool house.

First stop netted four pieces of jewelry and some Christmas Sheet Music that I completely forgot to photograph.  :(  The sale was in a neighborhood sale in the newer home subdivision and I really never go to sales there - everything is newer Kirklands, Pottery Barn sort of stuff or baby and kid related and I just don't need/like any of that stuff.  But, I drove through the streets, just in case it looked like someone was cleaning out Grandma's estate.  I finally found one sale that just had rows of boxes in the driveway and that looked mysterious so I thought I would have a dig.  I did find the few things I mentioned, but while I was looking, I got into a long conversation with the lady at the sale and it turned out that her Mother was in the same Rehab place where my Mom had been and they had been really good friends there.  When I described who my Mom was, I mentioned my Mom's back brace and neck brace she clasped her hands in front of her mouth and said, "Everyone talks about her all the time wondering how she is doing!"  So, that was the reason I stopped at that sale.  Small world, right?

Stop #2 had lots of furniture and a few smalls.  Just as I was about to leave empty handed, I spotted this cool 1970's metal file box. 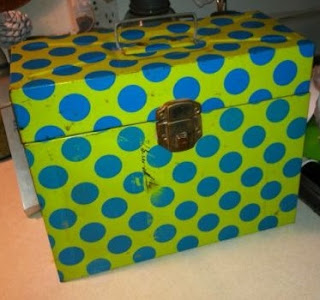 For ten cents.  Yes, ten cents.  I tried to give them a quarter, but they insisted I take the change.

Stop #3 provided a nice heavy angel food cake pan and a bundle of three old games strapped together.  Two Electronic Modular Science kits and a 1968 Cadaco Baseball Game like this one that sold for $96.00.  Total spent:  $1.00 for all four items.

Stop #4 was advertised as a Retiring Teacher selling off her school supplies such as flash cards, classroom teaching aides, classroom decorations, etc.  I had grand illusions of old flash cards, science posters, lab glass, pull down charts and the like, but it was mostly newer things.  She told me that she had sold a "ton" of things that morning, so I won't think about what I might have missed.  :( 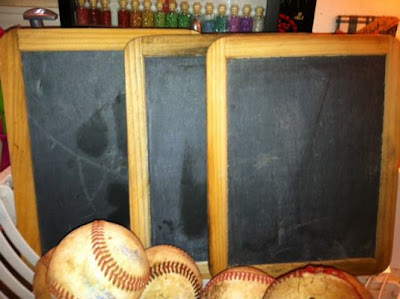 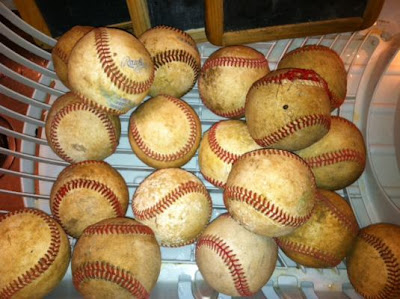 Eighteen old crusty used baseballs for a NICKEL each.
I envision them in a big old wire basket on someone's porch or in a glass cloche.
90¢ for eighteen balls is pretty cheap.  :D 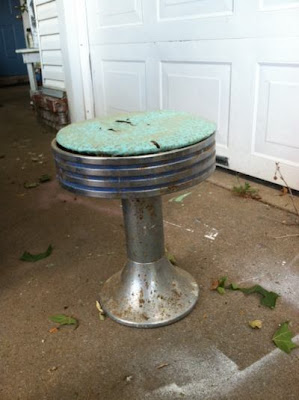 And this great old drugstore soda fountain stool.  For THREE DOLLARS.  I know it's rusty and crusty, but I've certainly never seen another one for sale anywhere.  It needs to be cleaned and scrubbed and recovered in a cool retro vinyl.  I think it is fantastic.  I don't know if I will do the work to it, or just sell it all rusty and crusty and let someone else do the hard work.  I kind of like it the way it is for the Barn Sale, but we'll see.

If you get out this weekend - watch that heat and drink lots of water.  It's going to be a scorcher.  I have no plans to go out tomorrow.  But, a cup of coffee and a glance at Craigslist and my plans might suddenly change.  You know how that goes, right?
Posted by Shara at 11:11 PM