Thank you for all the birthday wishes for The Bean.  He had a good day, I think.  I let down my guard and let him pick what we did all day.  He is a very quiet kid, never asks for a thing and finds it very difficult to make decisions and choices.  Not because he doesn't know or care - he worries that it will be too far to drive, or to expensive to do or take too much time or....or...or....  He is very conscientious about other people and their time and feelings.
tu-tu's?  They've got 'em!
So, yesterday he decided that he would like to go to the Mall.
OMG. I hate the Mall.
But, it was his birthday, so off to the Mall we went.
First stop - Hot topic.
OMG. I hate Hot Topic.
LOUD MUSIC. I don't really mind LOUD MUSIC, but I heard the F* word three times in one song alone. And, the clothes -holely moley - if you are looking for clothes to dress your teenage daughter up like a prostitute (and not just for Halloween - but for every day!) Hot Topic has the clothes for you! See through white shorty short
Okay, so I digress.  He looked around Hot Topic (we were on a quest for a new belt) and found nothing that he liked in the entire store - belt or otherwise.  Whew.  Outta there.
We headed towards the WiFi area to try out his new IPod touch from Mom and Dad.  We didn't have any luck even though it said we were connected to the WiFi.  We don't have WiFi in the house, but I guess we better gt it so he can utilize the I-Pod Touch.  (I honestly thought the I-Pod was only for listening to music.  My age is showing....)
Next up, much to this Mom's glee seeing as how it was his 16th and all......the Bubble Gum Machine Wall.  They have this HUGE bank of gumball machines full of gum, candy, trinkets, key chains, mini machine guns (I know, right?)  and lots of other weird and fun things.  We like to buy these giant jawbreakers, but they didn't have them yesterday so we settled for some monkey figurines.  I mean, who doesn't need some more monkey love?!?
We decided to go to JCPenney's.  Now, mind you, I do not do retail.  The Mall, in my minds eye is the most expensive place on the planet.  I just do not go there.  Period.  So imagine my surprise when we went down the escalator and all I see are rows and rows of racks of clothes - 70-80% off Clearance.  Who knew you could get good deals at the MALL????  We ended up getting a nice leather belt and three very nice shirts - over $100.00 worth for about $20.00.  I will not become a Mall junkie - but Penney's will be on my bargain hunting list  -  from time to time.
Time to eat - so off to Chili's.  The Bean is an Alfredo aficionado.  He loves Chicken Alfredo and know the best places to get it and Chili's is his very favorite.  Chili's happened to have a one day only FREE Dessert coupon - good ONLY on his birthday, so he ordered some sort of hot molten lava chocolate cake.  It reeked of chocolate.  He looked a little sick when we left, but heck, it was his birthday, so why not go a little crazy?
We returned home where we sang Happy Birthday and blew out the candles, then returned the uncut cake to the refrigerator since someone was still sick from Molten Lava Cake.  *I didn't have dessert and I had a salad and I wanted cake, but noooooooooooooooo we have to wait until tonight!  :)
I had a few questions in the comments about why I call him The Bean - so here is the story again for anyone that doesn't already know ( or cares!).  When I was pregnant, we followed the "What to Expect When you are expecting" Book (available at every garage sale and thrift store in quantity).  Around about Week 8, the book said that they baby was the size of a Pinto Bean.  So, we started referring to the  baby as "The Bean."  The Breadman was working at a Grocery Store at the time and as he was walking through the backroom one day, he spotted a lone Pinto Bean lying on the floor.  He brought it home to me and I swear to you - that was the sweetest most thoughtful thing he ever gave me.  I still have that silly bean! That is how The Bean became The Bean.  But, we never call him The Bean to his face - we only refer to him as The Bean.
As for what his real actual name is...well, here you go. 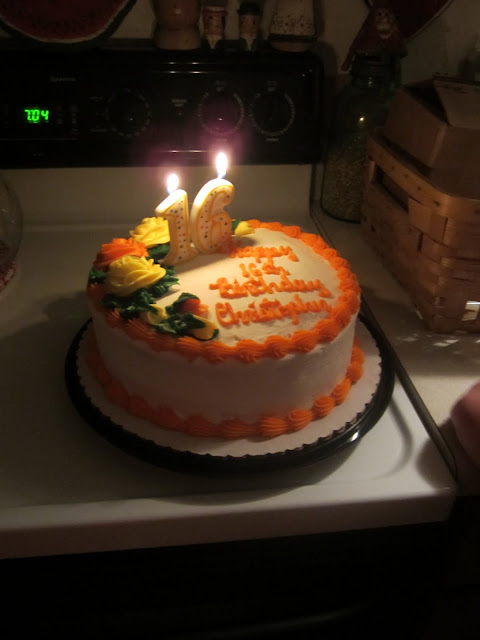 Thanks for indulging me in talking about my kid.  I know he's not some sweet faced baby boy or ruffly girl, but he's still my kid.  I wish blogging would have been invented...god that makes me sound old.....when he was little because he did funny stuff and I took sweet faced photos of him all the time.  he called Dessert Perzert, the called steps- beps, he was afraid of Ronald McDonald, he LOVED "Man, I feel like a woman" by Shaniya Twain and sang it while he wore his rubber cowboy hat and boots - he was a funny kid.
Off to Goodwill - maybe I will have some JUNK LUCK!
**PS - The Bean doesn't even have his Learner's Permit yet, so how's that for good parenting?  ha.  Homeschooler's have to jump through hoops to "prove" good grades and such before you can get the permit.  His grades are fine, just have to do the hoop jumping now.  Then, off to the roads we go.  Wheeeeeeeee!
Posted by Shara at 1:19 PM