The only rule in my quest to purchase one lowly bottle of dish soap today was that I did not want to shop anywhere that they sold turkeys or cranberries. I worked in a grocery store for ten years. I know the nightmare that is "The Day Before Thanksgiving." People buying 23 pound rock hard frozen turkeys at 6:30 in the evening and expecting to serve it to their guests at noon the next day. I so do not think so............

The answer to my quandary was Dollar General. And, it just so happens that one of my favorite thrifts is thisclose to the Dollar General. But, surely it wouldn't be open today - the day before Thanksgiving. The whole place is run by a bunch of Grandma's that surely must have turkeys to roast, pies to make and cranberries to sauce. No, I knew it wouldn't be open. But that didn't stop me from doing a drive-by. And, yippee, it was OPEN!

Straight to the Christmas I went. My eyes surveying the table looking for sparkle. And, what did I spy with my little eye? 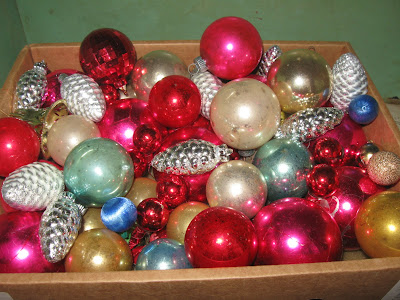 A big old box of SPARKLE! Actually, two boxes and a baggie full, but here it is all in it's glory. And, only $2.25 for it all. There are a lot of the smaller ones that I dearly love in there, but they have sunk to the bottom.

Hey! What's that over there? More sparkle? 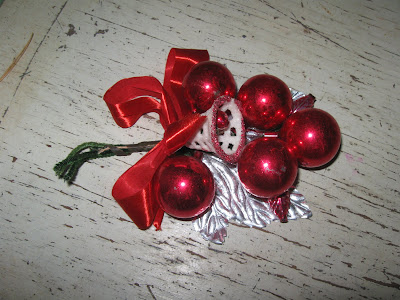 A vintage Christmas corsage. My very first one! In perfect condition. It's almost like it had never been out of the box. 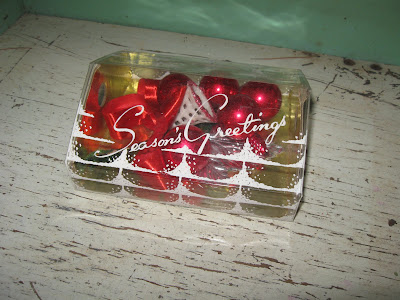 Oh, that's because it hasn't! Still in it's awesome vintage box. It was marked $2.00 and I was more than happy to pay that for it. But, when I paid, one of the aforementioned Grandma's said, "Oh, that's only worth 50¢." Okey Dokey Hokey Pokey. 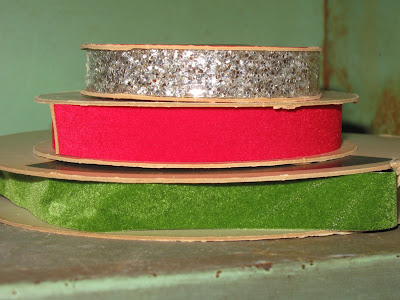 Full spools of lurvely green velvet ribbon, red velvet ribbon and sparkley silver glitter tape - $1.00 for it all. I think Glitter tape is one of the loveliest inventions ever.
I've never smoked, or drank or done drugs. I thrift! I swear it's the best high. You all understand, don't you? Well, don't you?
*It's 10:00 Wednesday night and there are already people waiting outside Best Buy for Black Friday. Crazeeeeeeeeeee.
**I found an unscratched Lottery ticket in the trash at the car wash today. I scratched it off and won $10.00.
***No, I do not dig in the trash - it was on top!
****Don't forget to go to the next post down for a treat.
*****Happy Thanksgiving!
******Did you know that Okey and Dokey and Pokey aren't in spellcheck? But Hokey is?
*******That's it. I'm done! Gobble Gobble!
Posted by Shara at 9:44 PM