We were on the way to the Shareholders Vendor Fair today when I spotted a few yard sale signs. The first sale was one of those that looked great from the road - boxes for digging, furniture, miscellaneous goodies, etc., but in actuality was just junk. The bad junk. Nothing of interest there. And the boxes that I wanted to dig in? Those were full of Depends Undergarments! Buh-bye! Sale Number Two was being run by a slightly deshevled grungy guy. I only stopped because it was at an old house with lots of stuff in the yard, which turned out was their own personal junk rather that good junk for sale. He was a talker and even wanted to show me things in his garage that he hadn't put out yet. I declined a look in the garage since we were running a bit late and I didn't really care to be on next week's episode of "Unsolved Murder Mysteries". 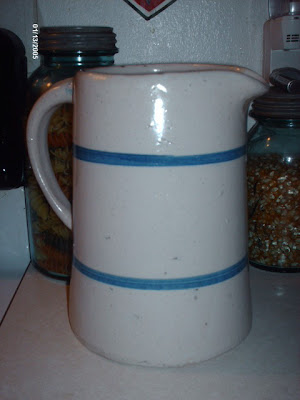 I did buy this very, very old salt glazed pottery pitcher for $3.00. It was an icky dirty brown all over, but cleaned up well. The bottom has a lot of wear and age to it, so it's an oldie. 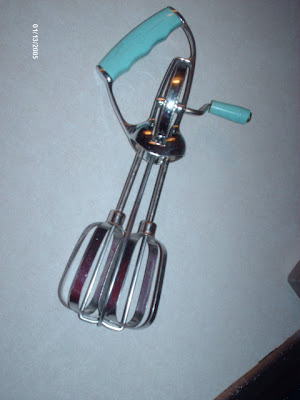 I also bought this heavy old metal egg beater with an aqua handle. It has a "W" on the handle, so I might research it a bit. I paid $2.00 for it, mostly because the guy didn't have change for a $5.00 on him and I would have had to gone into that garage with him to get my dollar.

Sale Number Three was at a house at a lady that runs an Estae Sale Company. Not ridiculoulsy expensive Estate Sales, but their things are a bit pricier than I am accustomed to paying. She had all the leftovers from various Estate Sales at her house mixed in with some other things. I bought something so totally not me. Are you ready? 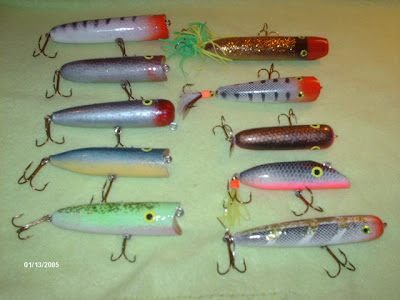 Vintage Wooden Fishing Lures. I know nothing about fishing lures, but I know someone out there will help me out. They are for resell, once I figure out what they are and how to list them. See, the thing that really sold me on them is they have glitter on them. Glitter certainly seems to make most things better, but fishing lures? I am not so sure. They were priced $5.00 each, but the lady said I could have them for $1.00 each. So, I paid $10.00 for all ten of them. Please let them be worth more than $10.00.......

Once I had my Junkin' fill, it was on to the Vendor Fair. This is part of the Wal-Mart Shareholders Annual Meeting. There are thousands of Wal-Mart Associates and Shareholders here from all over the United States and the entire world. I saw groups from Mexico, England and Brazil today. It is interesting to see them jump out of a bus and take a group photo in front of the Super-Center that I shop at each week. They are truly on vacation and enjoying the Wal-Mart hub-bub. Lots of locals hate the Shareholder Meeting because of traffic, crowds, etc. But, I figure, it is just a few days a year, it is fun and just go with the flow. As I was driving down the street today, I looked to my right and the Oscar Mayer Weinermobile was sitting in traffic next to me like it was just a normal commuting day. I also passed the Spam Mobile, The West Coast Choppers truck and a motorcycle with a sidecar on it that looked like a bottle of Coke. Just normal everyday traffic.

The Vendor Fair is just aisle after aisle of free goods. As far as the eye can see. Freebies. And they want you to take it because they don't have anywhere to pack it up and take it to the next stop. There are three of us, so that is three of everything, plus a husband in a Wonder Bread Uniform, so everyone asumes he is a Wal-Mart Vendor and they throw us extra stuff too. 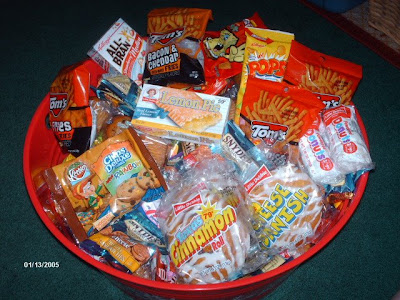 Here's the freebie junk food we got. There's a lot of junk food in there, but some fiber bars, cereal, crackers, Vitamin Water and a few other slightly "healthy" items in the bottom of that tub. 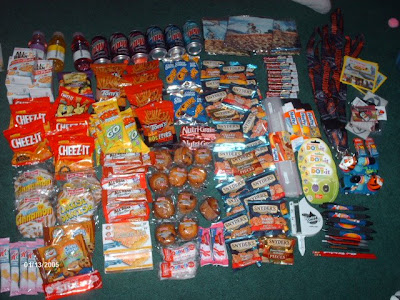 Here's all the goods. And in just one day. It's amazing really that we can get so much for free and every person there today had just as much, some even had more. I will freeze the perishable things and put the snack items in a picnic basket for car trips and snacks. There are also trash bags, ziploc bags, lanyards, flashlights, pens (my favorite being a pen that simply says, "BIMBO"*), pencils, computer games, toys and a slew of other goodies for sharing, trading, swapping and using. We are like little kids on Halloween - sorting and piling, counting and hoarding, trying out a thing or two. (I had a Little Debbie Lemon Pie. Little Debbie doesn't use Animal Fat, so it is the one snack cake we can eat).

And, yes, we are going back tomorrow!

*BIMBO is a line of Mexican Snack Cakes like Hostess or Little Debbie's.