The Bean and I got up early Friday morning and headed to Neosho.  He's still my yard sale road trip buddy, which is nice for a multitude of reasons.  I wouldn't travel alone, I love his company, he shops too and in case there's another F-L-A-T, he can change it for me.  We usually stop at the AR state line and hit Goodwill right as they are opening to use the restroom and to make a quick run through the aisles.  This time we were too early to do that (I WAS TOO EARLY!), so we just got some gas and used the restroom there (TMI?).  We hit our first sales in Neosho about 9:00, which I am sure is late to the die-hards, but there's a drive and I really don't want to deal with the die-hards that are there trying to get the furniture and tools and stuff very first thing.  I never go in mind of what I want - I am just happy to find what I do find.

First stop was at a motel where people set up in the parking lot.  It's really more new stuff, but The Bean collects knives, so he usually finds one there.  So, I stop there first thing to appease him.  There is also this family that buys storage sheds and estate sales and they bring all the clothes and leftover household goods and smalls there.  They line them up on these 40 foot long tables and everything is a quarter.  A lot of times it is store buyouts and there is old medicine and crap that no one wants.  But, this time there was a lot of older stuff like I like.  I spent $10.00, so that was 40 items.  I dug and found a pocket of vintage Christmas, which was probably my best find of the day, really.  It wasn't a lot, but it was in perfect condition and the price was certainly right. 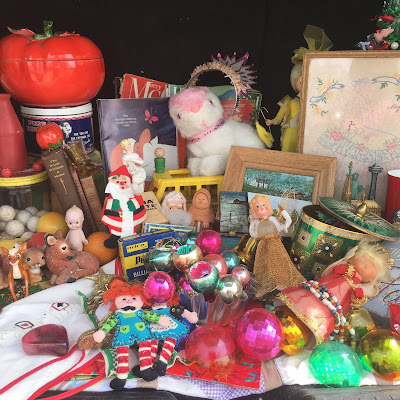 I got most of that Christmas there, but I did find a little bit here and there throughout the day.  The old indents are my favorite and I need them for inventory - but COME ON!  They cost a quarter for all of them and they are beautiful.  So, that will be a conundrum for me.  There's a sneak peak of some of my finds. 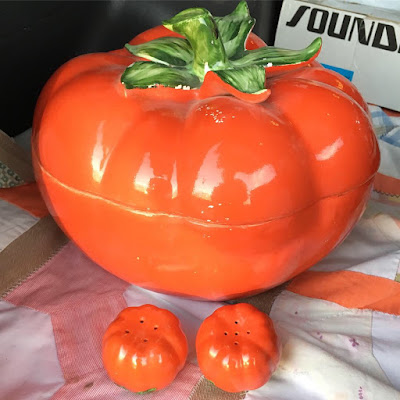 I found this Holt Howard soup tureen at a Church Sale about noon.  I was amazed it was still there - and only $2.00!  The tomato shakers were by it, so I put them inside the tureen along with a little 10¢ Kewpie doll.  When I got home, they were still inside so I'm not sure I paid for them.  I thought the shakers went with the tureen, but they were priced $3.00.  I did tip them $2.00, bit now I have guilt over that $1.00.  I will remember next year and tip more.  Things like that really bother me! 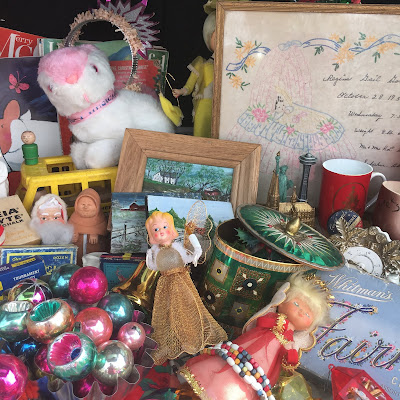 We stopped at an antique store that had tents set up in the parking lot.  I scored the vintage musical bunny out of a bin at a tent full of newer baby junk.  You never know when you will find an oddball vintage item.  So much of this stuff was picked up an item here, an item there.  But in the end, it looks like a lot and it all meshes together. 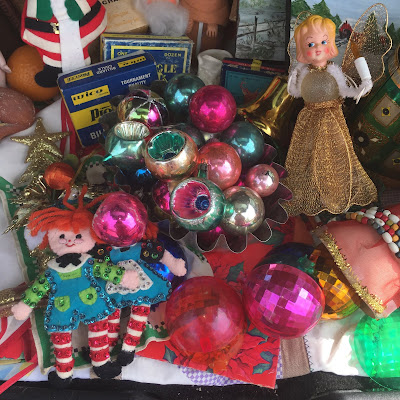 Close up of the Christmas because WHY NOT?  Those indents are so, so fabulous. 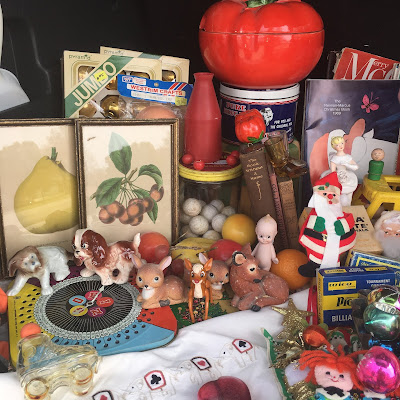 The Quince and Cherry prints were at a sale with a lot of good stuff, but nothing was priced.  My pet peeve.  But, then I noticed a sign - everything $1.00.  Well, WHOOPIE!  I only bought seven things because we were afoot and the car was a long ways away. 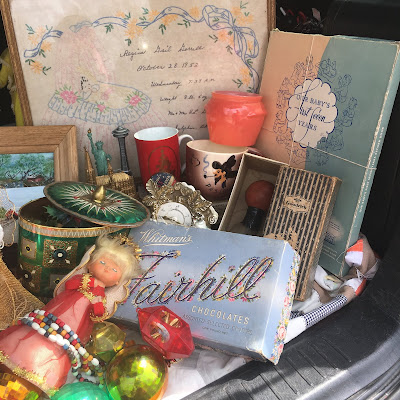 I think I got the chocolate box there.  And that embroidered baby announcement.  The people selling it liked it, but wondered who would want such a thing.  "Lots of people", I said.  I bought the old Goodyear breast pump from a scroungy, but very nice, guy in a roller rink parking lot.  He looked at it to determine what it was and then said, "Ouch".  :)  I don't understand how so many people are selling things that don't know what they have until I walk up with it. 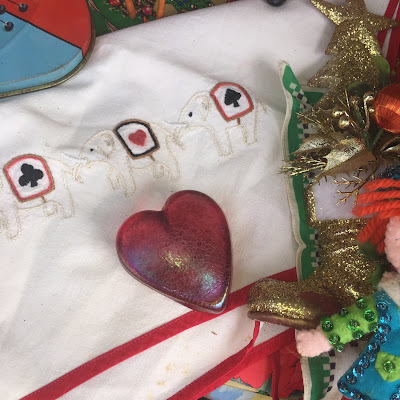 Can you see the elephants on the card tablecloth?  The glass heart was a 25¢ impulse buy because it looked nicer than usual.  It turned out to be a Robert Held piece from Canada worth about $40.00. 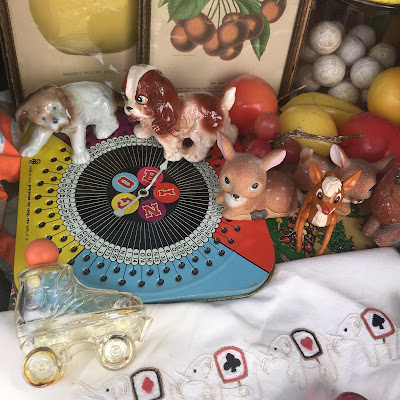 Dogs and deer were at the 25¢ tables sale.  They'll be worked into something Christmas-y.  That fruit is old and made of wax.  I rarely find that stuff in good shape.  The BINGO thing is a box top, but still cool.  The roller skate is Avon, which I do not like - but I am on the hunt for some roller skating items, so I grabbed it. 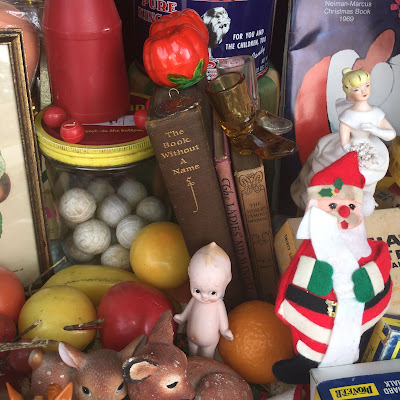 Some books and odds and ends.  If I like it and it's cheap - I buy it.  I bought a box full of those white balls, pool chalk and lots of other weird gaming stuff.  Someone guessed the balls are Foosball balls, and I think they are right. 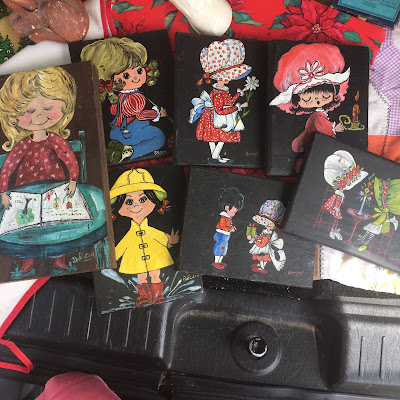 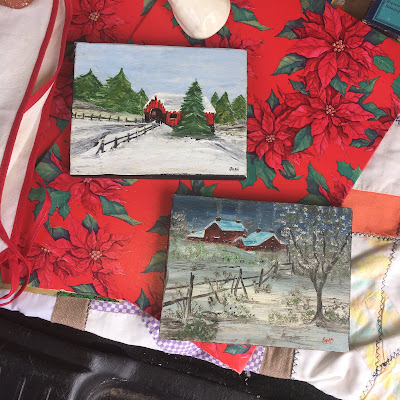 When I was unpacking, I found these sweet little Wintery barn paintings in my bag.  I'd never seen them before - what on earth?  Then I flipped them over and found the little girls on the reverse.  So, I accidentally scored some nice paintings too. 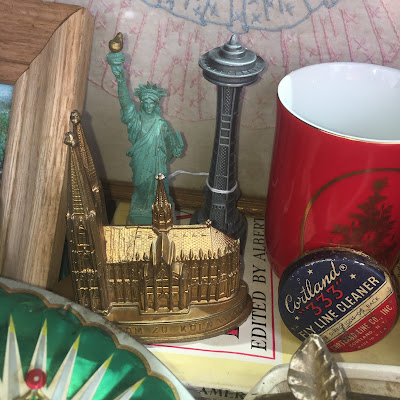 The Bean has a collection of mini monuments, so it was fun to find these three to add to the collection.

On the way home, we stopped at the Goodwill because it was 4:50, and the traffic from Walmart corporate was about to let out.  I'd rather kill time that be in all that traffic.  Plus hello?  Goodwill!  It was there that I found the most hideous thing EVER. 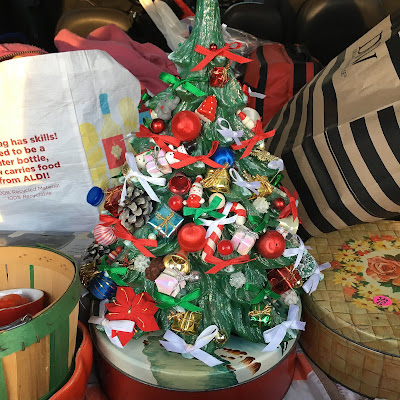 STEP AWAY FROM THE GLUE GUN.

The vintage doodads aren't a bad addition - but all those dang 1980's bows?  Blech.

I thought it was a ceramic light up tree and I could tell it was hot glue, so I thought I could pop off the stuff and hopefully the tree would be salvageable. 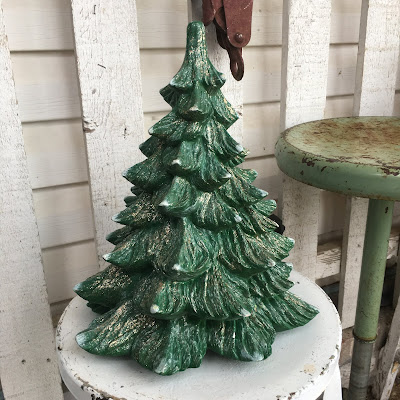 Although it's not a lighted tree - just a tree.  But it's still pretty neat and I know it will sell. 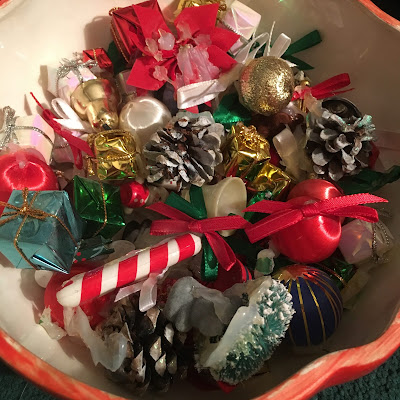 Plus I saved the good vintage stuff for my creations too.

So, next weekend there are TWO citywide sales - one in Bella Vista and one in Elkins - both about equal distances from my house - 20 minutes or so.  Bella Vista is sprawling and on hills, but I had good luck last year.  Elkins is a new sale this year, so who knows?  There are a lot of brand new homes and a lot of really old small houses (Yes, please), so it could be a mixed bag.  Either way, I'll be back with a report!  I'm trying to get back on the blogging train.  Woo-woooooooo! :D